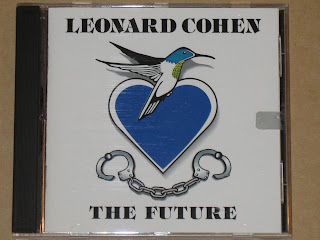 The Future was Leonard Cohen's only studio release in the 1990s. Songs from this album were featured in Natural Born Killers.

"The Future," the title track, opens the album, his first studio release since 1988's I'm Your Man.

"The Future" is certainly one of the songs that has earned Leonard Cohen his reputation for being pessimistic, a prophet of doom. With the refrain, "I've seen the future, brother: it is murder," it's hard to argue the point.

This song was also featured in the film Natural Born Killers, which itself is certainly no optimistic look on the world.

The second song on this album, "Waiting For The Miracle," isn't about to lift anyone's spirits either. It too was featured in Natural Born Killers. It was co-written by Sharon Robinson.
But both of these songs are excellent.

"Be For Real" is a song written by Frederick Knight. Yes, a rare cover song on a Leonard Cohen album. Actually, this album has two cover songs, the other being the Irving Berlin song "Always."

It's easy to see what attracted Leonard Cohen to these songs. With the lyrics, "Are you back in my life to stay/Or is it just for today/That you need me?/If it's a thrill you're looking for/Well, honey, I'm flexible," "Be For Real" sounds very much like something Leonard Cohen might have written himself. The last couple of lines in that stanza are reminiscent of the lyrics to "I'm Your Man."

Incidentally, "Be For Real" was also covered by the Afghan Whigs in the film Beautiful Girls.
The other cover, "Always," is Leonard Cohen really letting loose. The song has the feel of being improvised by friends at a party. It's just over eight minutes long, and a real treat.

"Closing Time" is by far the most fun song on this album. Who thought a Leonard Cohen song would make people dance around the room? This song is also a concert favorite. He performed it at the majority of his concerts on the 2008-2009 World Tour, in the encores.

At his concert in San Jose last year, during the line "all the women tear their blouses off," several women threw blouses onto the stage. It was amusing, but fans hope this stunt doesn't get repeated at future shows.

The lyrics to "Closing Time" are excellent. Here's a taste: "I swear it happened just like this:/a sigh, a cry, a hungry kiss/the Gates of Love they budged an inch/I can't say much has happened since."

For those still thinking of Leonard Cohen as a downer, there is the uplifting song "Anthem." The chorus is "Ring the bells that still can ring/Forget your perfect offering/There is a crack in everything/That's how the light gets in." Perfect.

This is the song Leonard Cohen chose to end the first set of his concerts, leaving his audience feeling pretty darn good as they tried to get to the bathrooms and back before the second set started.

And this song is ultimately optimistic. Each verse ends with the line, "Democracy is coming to the U.S.A." That's a fairly hopeful statement.

Light As The Breeze

"Light As The Breeze" is an excellent song, but one that was ignored when the band chose the set lists for their tour. The song ends with the lines, "I knelt there like one who believes/And like a blessing come from heaven/for something like a second/I'm cured and my heart/is at ease."

It's actually a really pretty song. Perhaps it's to calm the listeners after the ride through "Democracy" and "The Future," to give them a place where they can relax and dream. It's a great late-night song.

CD Track Listing
(Note: I originally posted this review on February 22, 2010 on another site.)
Posted by Michael Doherty at 7:57 PM