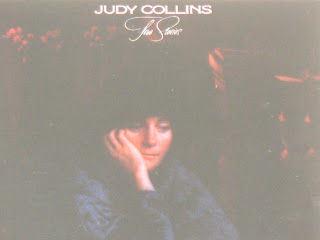 Judy Collins has one of the most beautiful and recognizable voices in folk music. Yet somehow several of her albums were allowed to go out of print, including her 1973 release, True Stories And Other Dreams. But later this month Collectors' Choice Music is re-releasing this album as well as eight others.

Judy Collins opens this album with "Cook With Honey," which was written by Valerie Carter. This song was also released as a single, and reached #32 on the Billboard Hot 100, her first top 40 song since 1970's "Amazing Grace." (That version of "Amazing Grace" can be heard on her album Whales & Nightingales, which is also scheduled to be re-released this month.)

Judy Collins Wrote Many Of The Songs

"Fisherman Blues" is the first track on the album written by Judy Collins. It features a catchy down-home guitar part as well as some nice fiddle. It's a fun and innocent song.

"Secret Gardens," also written by Judy Collins, starts with strings, and also features some nice work on piano. The song's first line was a line from her journal, written after her grandmother died: "My grandmother's house is still there, but it isn't the same."

Judy Collins has often written about her family. On this album, she included a second song about a family member. "Holly Ann" is about her sister.

Judy Collins wrote "Song For Martin" for Martin Hoffman, who had killed himself. Like it says in the song, he's the first person Judy ever heard sing Woody Guthrie songs. As much as it's about Martin, it's also about Judy, and her busy life at the time. It's a sweet and sad and beautiful song. It's painful to hear her sing, "Mart, I know I let you down somewhere."

The album concludes with another Judy Collins composition, "Che." A song about Che Guevera, it has interesting changes. It takes the listener on a journey, getting tense, then relaxing, releasing with the refrain, "Continue with your work."

Though Judy did write much of the material for this album, she still of course managed to pick some great songs to cover. She always adds her own personal touch and flair to the songs she chooses.

"The Dealer (Down And Losin')" is one of those songs that uses gambling as a metaphor for life. It's a pretty good song, mellow and nice. It was written by Bob Ruzicka, and originally appeared on his first album. The lyrics are good and appropriately depressing, such as these lines: "You can't win and you can't break even/You can't get out of the game/You shouldn't stay, but you ain't leaving/Because your luck could change again."

Judy Collins also covers Tom Paxton's "The Hostage." This is the most lively track on this album. It was written about the 1971 Attica prison riots. Tom Paxton's own version was included on his 1972 release, Peace Will Come. This is a really good song, featuring nice touches on electric guitar.

True Stories And Other Dreams was originally released in 1973. It was released on CD in 1990. It is scheduled to be released by Collectors' Choice Music on July 27, 2010. Eight other Judy Collins are also scheduled for release on that date, including Fifth Album (1965), In My Life (1966) and Whales & Nightingales (1970).