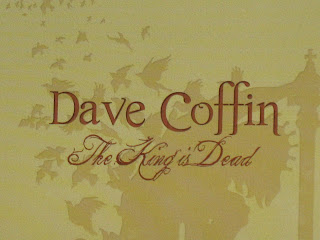 Excellent songwriting and some wonderful guest musicians are featured on Dave Coffin's 2010 release, The King Is Dead.

"What Kind Of Love Is This"

The album opens with a song with such a bright tone and a joyous feel that it will lift the spirits of even the most cynical of people. Sure, it almost borders on the absurdly happy, but it's able to avoid being cheesy by having great lines like, "I've had the kind of love that tricks you into thinking you're the answer to the question that she asks." That's actually the opening line, setting the tone. Dave Coffin's acoustic guitar part is so catchy and delicious.

The bright tone continues on the second track, "I'm So Happy You're My Girl," which is an unabashed love song. The title says it all. It's a song that celebrates love and a relationship, with great lines like, "When you open up your arms you'll find me in them" and "When you ask me questions I try to tell the truth/And if I don't know the answer I make something up/When you trace the lines across my face/I'll be damned if that ain't love." It benefits from some sweet violin-playing by Jane Park. Pat McCann plays piano on this one.

"Bodyless" has a good groove, and is about a car crash and the resulting death of Petunia. Thus, the title. Dave Coffin's best friend growing up died in a car crash. He wasn't close to the woman who drove the car. In the song, she is called Petunia. Jason Crigler adds electric guitar to this track. This song was also included on Dave Coffin's 2008 release, Live At The Lizard Lounge.

"I Don't Think You Love Me"

"I Don't Think You Love Me" is a good song, but it really gets going when suddenly Ryan Zoidis kicks in on saxophone. It's such a beautiful touch. And the vocals sound wonderful on this one. Allyssa Jones does backing vocals. Other guest musicians on this song include Duke Levine on electric guitar and Al Kooper on piano and organ.

"Smooth Sailing" is a really good driving song - a song to put on a mix CD for any road trip. Then play it whenever there's any sign of trouble, and it will help. Of course, the song isn't only about driving, but about remaining positive, and sticking with something even through the problematic spots. Heath Marlow plays cello on this one. Jeff Louie plays violin. Pat McCann plays piano. The violin and cello are allowed to finish out the song beautifully.

"The Long Road Home" is another excellent driving song, but with a completely different feel from "Smooth Sailing." This is a song to listen to late at night when driving alone. It's beautiful and quiet and sad, and has some nice guitar work by Duke Levine. Dave Coffin wrote it about a traveling musician who was having troubles at home and would take the scenic route in order to postpone the pain there. This is one of the best songs on this CD.

"Tomorrow" is a cool song where the singer offers comfort to a woman, and thus also to the listener. He sings, "I know you've had a tough time/If the sun goes down and doesn't come back up/I will stay by your side." And he tells her that, "Tomorrow it'll all be alright." This song has a really nice build. And there is a great guitar section.

"Clean Slate" has the great line, "In a world full of opposites/We can't find anyone to attract." Ryan Zoidis shows up on saxophone partway through this song, and his solo is one of the song's highlights. Jane Park adds violin, and the last section of the song is really wonderful. This song was also included on Dave Coffin's 2008 release Live At The Lizard Lounge.

"The King Is Dead" Title Track

The album concludes with the title track, a strange and interesting song about deposing a tyrant. It's about the French Revolution, but of course it's also about more recent political arenas. The song certainly isn't shy in its lyrics. Dave sings, "We could run this kingdom better with our eyes gouged out/We aren't stopping until we have his stinking, bleeding head/Today we will sing the king is dead."


All of the songs were written by Dave Coffin. The King Is Dead is scheduled to be released June 15, 2010. The official CD release party is June 12, 2010 at The Lizard Lounge in Cambridge, Massachusetts. Chuck Anastasiou will be doing an opening set.