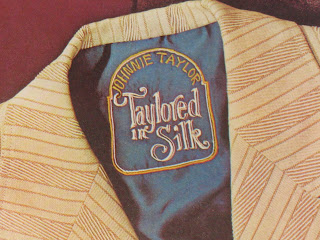 Johnnie Taylor has this fantastic soul voice with touches of gospel. Comparisons can, and have been made to Sam Cooke, and he actually replaced Sam Cooke in a gospel group during the 1950s.

Johnnie Taylor joined Stax in 1966, and there had a lot of success. Starting off in blues, he had hits with "I Had A Dream," "I Got To Love Somebody's Baby" and "Somebody's Sleeping In My Bed." His style changed with the addition of Don Davis as producer, but the hits kept coming.

"We're Getting Careless With Our Love"

Taylored In Silk opens with "We're Getting Careless With Our Love," which is one of those sweet and sexy songs about cheating. It's about two lovers taking risks, trying to extend their time together. Written by Don Davis and Frank L. Johnson, it reached #5 on the R&B chart, and #34 on the Billboard Hot 100. This song also contains a reference to "Me And Mrs. Jones."

"Starting All Over Again"

"Starting All Over Again" is a wonderful song, perhaps the best on the CD. The song begins with the backing vocalist singing a few lines before Johnnie Taylor comes in. The backing vocals are perfect, and add a lot to the song, as do the strings.

Here is a taste of the lyrics: "Starting all over again/Is gonna be rough, so rough/But we're gonna make it/Starting all over as friends/Is gonna be tough on us/But we've got to face it." Johnnie also sings, "It's an uphill climb to the finish line," but the song has an optimism about the relationship that is refreshing.

"Cheaper To Keep Her"

"Cheaper To Keep Her" is a groovy jazzy little gem about the value of staying with your spouse. Because, as Johnnie sings, otherwise you'll end up paying alimony or doing time. And the female vocalists echoing "It's cheaper to keep her" is delightfully funny. Johnnie Taylor advises, "By the time you get through looking that judge in the face/You're going to want to cuss the whole human race/That's why it's cheaper to keep her."

"I Believe In You (You Believe In Me)" starts quietly, with keyboard and a light tapping on the hi-hat. From there, it builds and builds, adding instruments and volume, for the first minute or so. It's a wonderful way to pull the listeners into this great tune about sustaining a relationship despite its obstacles.

This song features great lines like, "I heard your mother say loving me didn't make no sense/But when she put me down, you stood up in my defense." His voice is full of passion at times - an earnest vocal performance that really drives and sells this song. Written by Don Davis, this song reached #1 on the R&B chart, and #11 on the Billboard Hot 100.

The original album concluded with "This Bitter Earth," a song that teeters dangerously on the edge of being cheesy due to its arrangement, but is kept from that fate by Johnnie's excellent vocal work. In fact, this song might boast his best performance of the entire album, and that's saying something. Written by Clyde Otis, "This Bitter Earth" was a hit for Dinah Washington in 1960.

"Hijackin' Love" is a fun song that sounds a bit like Temptations territory. It reached #10 on the R&B chart, and #64 on the Billboard Hot 100, and was written by Tony Hester and Richard Wylie. But it's the single's flip side, "Love In The Streets (Ain't Good As The Love At Home)," that's even more appealing. It's got such a good groove.

Johnnie Taylor had a huge hit in 1971 with "Jody's Got Your Girl And Gone" and so a sequel was recorded and included here - "Standing In For Jody." This one reached #12 on the R&B chart and #74 on the Billboard Hot 100 - not doing nearly as well as its predecessor, but a good song in its own right. It was written by Bobby Newsome and Kent Barker. (Kent Barker co-wrote the original "Jody" song with James Skeet Wilson.)

"Doing My Own Thing (Part 1)" is a slow blues number, closer in style to Johnnie Taylor's earlier work.


Taylored In Silk is scheduled to be released on May 10, 2011 through Concord Music Group as part of the Stax Remasters series. Two other discs from this series will be released on the same date: Booker T. & The MGs: McLemore Avenue and The Staples Singers: Be Altitude: Respect Yourself.

Johnnie Taylor died from a heart attack in 2000.
Posted by Michael Doherty at 8:10 PM