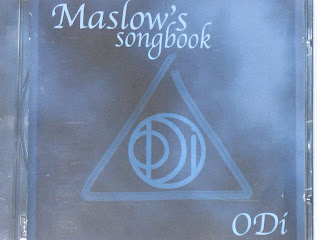 Maslow's Songbook is the debut full-length album from Irish singer/songwriter ODi (Claire Odlum), and it's an excellent CD.

There is not a single weak song on this album. There is no filler material (not even the short instrumental). Each song is unique, each song a separate journey. This is an album that deserves and demands to be listened to multiple times. Forget downloading the single or a couple of tracks. Just pick up this album and enjoy it through and through, over and over.

"Something Beautiful" is the single from the album. It was written by Dave Redfearn, who also plays guitars, piano and percussion on the album, as well as providing backing vocals. It's an incredibly pretty song, especially during the chorus, which is , "We all want something beautiful/To hold on to, till the pain is through/There's something we can do."

"Make it Better" starts with piano and vocals. It's a gorgeous song, which builds perfectly. ODi's voice is incredibly moving as she sings, "And I'll be the one to try to make it better/Comfort and hold your head/It's alright, if you cry and shout out/Just give me the chance to be there." This is one of the best songs on the album. It's like a friendly voice calling to the listener in the dark. This song itself seems to have the power to make it better.

"One In A Million"

"One In A Million" is another incredible song. It creates a particular and singular mood with its sparse instrumentation and excellent vocals, and even with the use of handclaps. And then there is some great work on strings. This song was written by Daniel Norton and Emily Norton. Here is a taste of the lyrics: "Swam for a while in the water/Swam for a while in the sea/Tried not to feel that there's more to feel/Than the cold that's swimming round me." Odi's vocals are simply magnificent.

"You Win But You Lose"

"You Win But You Lose" is probably the best song on the album, and one of the best songs of the year. It's sweet and sad, like some of Aimee Mann's best work. It was written by Claire Odlum and Dave Redfearn. The chorus is "You win but you lose/You try to refuse/All the things that she said/Going round in your head/And you knew that this time/You should have made up your mind/But all you can do/Is try to hold on, hold on."

"Lonely Ballerina" is a very short instrumental piece that starts with a quiet piano and the sound of wind blowing. A storm. As the wind fades, the piano comes up, as does the crackling sound of a fire. So it's someone (the listener) coming in from the storm to be warmed by the fire and the piano.

The album concludes with "Maslow's Love Song." This song starts off with a simple, pretty guitar part and vocals. Nearly four minutes in, this song kicks in with such force and power that it will shake the listener. It will grab on and not let go. Good luck trying to do something else while listening to it. This is a great song, and a great song with which to end the album.

So who was Abraham Maslow? He was an American psychologist who is most famous for his idea of the hierarchy of human needs, with basic needs such as food and water at the bottom, and self-actualization at the top, meaning creativity.

There is a quote from Maslow in the middle of the liner notes for this album: "A musician must make music, an artist must paint, a poet must write, if he is to be ultimately at peace with himself. What one can be, one must be."


Claire Odlum wrote the majority of songs on this album. Maslow's Songbook is scheduled to be released on August 23, 2010.

ODi will be touring the UK in September to support the album. And there's good news for folks in California. ODi is planning to do some gigs there next year.