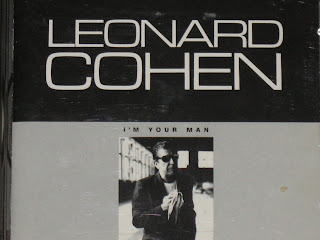 I'm Your Man was Leonard Cohen's second and final album of the 1980s, and its popularity was helped by the film Pump Up The Volume. Jennifer Warnes, Sharon Robinson and Anjani all worked on I'm Your Man.

This is his first album since 1984's Various Positions, and the first album to get an initial release in the United States since 1979's Recent Songs. It also contains one of his most famous songs, "Everybody Knows."

"Everybody Knows" Used In Pump Up The Volume

"Everybody Knows" was co-written by Sharon Robinson, who co-wrote some more recent songs with Leonard Cohen, and who was featured on the recent 2008-2009 tour.

(As a side note, another Leonard Cohen song was featured in Pump Up The Volume: "If It Be Your Will" from the previous album, Various Positions.)

An audience favorite from this album (especially among the female fans) is "I'm Your Man," the title track from this album. It starts off with, "If you want a lover, I'll do anything you ask me to./And if you want another kind of love, I'll wear a mask for you./If you want a partner, take my hand./Or if you want to strike me down in anger, here I stand./I'm your man." Who doesn't want to hear someone say that to them?

The song is incredibly sexy, made even more so by Leonard Cohen's deepening voice.

"Take This Waltz" is based on a poem by Frederico Garcia Lorca. Jennifer Warnes does backing vocals on this song, as well as on "Everybody Knows," "I Can't Forget" and "Tower Of Song." Raffi Hakopian plays violin on "Take This Waltz."

This album sounds very much a product of the 1980s, which of course it is. The presence of keyboards and synthesizers is obvious, and an obvious change from earlier releases. But the songwriting is so strong, as always. And of course it's all done with a sense of humor.

Leonard Cohen opened the second set of his concerts last year with "Tower Of Song," the last song on this album. He had a synthesizer set up in the center of the stage, and joked that the audience probably hadn't seen anything like this before, and not to be alarmed when he started it up, that it would play by itself.

There is however, a cool piano interlude a couple minutes into the song. Other than that, the music is obnoxious.

The album closes with "Tower Of Song." As noted, this song opened the second set of his recent concerts. The lyric, "I was born like this, I had no choice/I was born with the gift of a golden voice" always got a big cheer from the audience.

The line of course is self-teasing, as his voice was often noted by critics for being less than stellar. This song has several other lines in which he seems to be joking about himself, and about his place in the world of music, the tower of song. (He places Hank Williams a hundred floors above himself.)

Anjani performs backing vocals on "First We Take Manhattan," "Ain't No Cure For Love," "I'm Your Man" and "Jazz Police." She also performed vocals on Leonard Cohen's Various Positions (1984), The Future (1992) and Dear Heather (2004). She also co-wrote some of the songs on Dear Heather.

The album was produced by Leonard Cohen, but certain songs were produced by Roscoe Beck, who was the bass player and musical director for Leonard Cohen's recent tour. He also worked on the arrangement for "I Can't Forget."

(Note: I originally posted this review on February 19, 2010 on another site.)
Posted by Michael Doherty at 8:05 PM