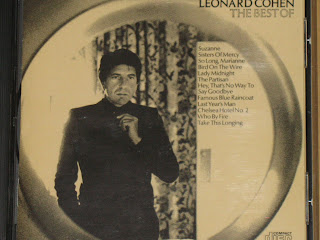 This collection of some of Leonard Cohen's most well known songs was released in 1975.

This album was the first "Best Of" collection of Leonard Cohen's material. It came out after only four studio releases: Songs Of Leonard Cohen (1967), Songs From A Room (1969), Songs Of Love And Hate (1970) and New Skin For The Old Ceremony (1974). And all of the songs on this album are from those four earlier releases.

The album opens with Leonard Cohen's most well known song, "Suzanne." Although now it seems that "Hallelujah" (from 1984's Various Positions) is rivaling this song for that position. This is a beautiful song.

Leonard Cohen has the ability to write about very specific images and very specific moments from his life while making them seem simultaneously universal so that they could relate to the listener's life. Or perhaps make the listener feel that the memories are his or hers. It is that way with "Suzanne."

Knowing that there really was a woman named Suzanne, and that each of the lines is making a reference to specific objects in a specific location is not necessary to enjoy the song, to feel the song. At the same time, knowing the specifics does nothing to ruin one's personal interpretation of the song.

"Sisters Of Mercy" is one of Leonard Cohen's best songs. In the liner notes Leonard Cohen notes that the song was written in a few hours one night in a hotel room.

A taste of the lyrics: "Yes, you who must leave everything/That you cannot control/It begins with your family/But soon it comes round to your soul."

"So Long, Marianne" is another incredible song. It's gotten new life in recent concerts, with Leonard really drawing out and belting out the line, "You left when I told you I was curious/I never said that I was brave."

"Bird On The Wire"

"Bird On The Wire" is another of his famous songs. It's been covered many times by many different artists. The lyrics have changed over the years. For the current version, listen to Live In London.

"The Partisan"
"The Partisan" is the one cover song on the album. It's a song of French resistance to the Nazi occupation, and was written in 1943 (or perhaps 1944). Part of this version is in French.

In the liner notes for this collection Leonard Cohen says that because of this song he "developed the curious notion that the Nazis were overthrown by music."

This song is one of his best, despite its reference to Scientology ("Did you ever go clear?"). It has the lines, "If you ever come by here for Jane or for me/Well, your enemy is sleeping and your woman is free/Yes, and thanks for the trouble you took from her eyes/I thought it was there for good so I never tried."

Years ago Leonard Cohen revealed who this song is about. But he has since regretted it, so in case the reader doesn't know the story, her name won't be revealed here. Listen to the song first, get to know it, and the information is out there for those who need to know.

As one might guess, most of the songs on this collection were included in the set lists for Leonard Cohen's 2008-2009 World Tour. Only three were not performed: "Lady Midnight," "Last Year's Man" and "Take This Longing." And many were steady staples of his concerts, including "Who By Fire," which featured the incredible Javier Mas.

For someone who is new to Leonard Cohen's music, this album is a good place to start. It obviously contains some of his most popular songs, at least from the early years. Other collections have been released since this one that include later material. There is 1997's More Best Of and 2002's The Essential Leonard Cohen.

"Suzanne," "Sisters Of Mercy," "So Long, Marianne" and "Hey, That's No Way To Say Goodbye" are from Songs Of Leonard Cohen, his first album. "Bird On The Wire," "The Partisan" and "Lady Midnight" are from Songs From A Room, his second album. "Last Year's Man" and "Famous Blue Raincoat" are from Songs Of Love And Hate. (Those first three albums have recently been reissued with bonus tracks.) "Chelsea Hotel No. 2," "Who By Fire" and "Take This Longing" are from New Skin For The Old Ceremony, his fourth studio release.

The song list for The Best Of Leonard Cohen is as follows:

Posted by Michael Doherty at 5:43 PM