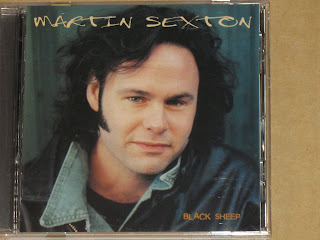 Martin Sexton has an incredible and powerful voice. This album also shows that it's not just his voice, but the lyrics he sings that move audiences and listeners.

This album opens with the incredible "Black Sheep," the title track. Right away Martin shows what he can do with his voice. When he used to perform solo, he would fill the entire stage and the entire room (no matter the size) with his voice. It often felt like there was entire band up there with him.

Possibly the best song on the album - certainly the most well known - "Glory Bound" again shows how he can stretch his voice. It also shows how he sometimes just relaxes his voice, and talks his way through a portion of the song.

Boston Folksinger
"Diner" is quick, fun song. The song mentions Worcester, Mass. in the first verse. Though born in upstate New York, Martin Sexton made a name for himself in Massachusetts, as a Boston folksinger. His first album was sold only on cassette. He hawked them himself at his shows, and managed to sell 20,000 copies (according to his own press).

Freedom Of The Road

With a title like "Freedom Of The Road," one might expect a song that would extol the virtues of being on one's own, of just driving, without cares or responsibilities. Not so this song. It's about a man who broke up a home and is now questioning his life, his decisions. He sings in the chorus, "I've had enough of this freedom of the road." It's a wonderful and hopeful song. By the end, he's made the decision to go home.

Patty Griffin does backing vocals on "Freedom Of The Road."

Other musicians featured on this album include Joe Donnelly on drums, John Troy on bass, Greg Holt on bass, Harry King on piano and B3, Brad Hatfield on piano, Crit Harmon on acoustic guitar and electric guitar, Rick Hammett on trumpet, Sa Davis on percussion, Sherma Andrews on backing vocals, Ned Claflin on backing vocals and Jennifer Tobin on silver bracelets.

Martin Sexton of course does the lead vocals and acoustic guitar, and electric guitar on certain songs.

Martin Sexton Is An Excellent Songwriter And Performer
Martin Sexton wrote all of this songs on the album, with the exception of course of "America The Beautiful." Also, four songs had co-writers: "Diner," "Freedom Of The Road," "Caught In The Rain" and "Love Keep Up Together."

The lyrics are great. Like this line from "Can't Stop Thinking 'Bout You": "Loving you was like loving a house on fire." Or this from "Candy": "Don't usually get emotional, don't usually show my veins she said/Only when I sing or when I'm making tracks."

Martin writes great songs, but he can also do wonders with existing material. Especially with that amazing voice of his. Anyone who's heard his version of "Purple Rain" will attest to that.
Martin Sexton's live performances are so full of energy, so full of life and power that it's a wonder he doesn't explode or transform into pure vibration. This album gives the listener more than a hint of the power of his voice, of his presence.

Posted by Michael Doherty at 12:51 AM