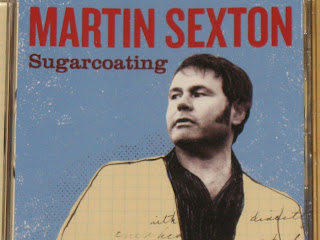 Martin Sexton has one of the most powerful and interesting voices in music.

Martin Sexton starts off his new album with "Found," a song about reaching out to other people, while being lost in the trappings of the modern world. The lyrics include this: "I get held up and dragged down/but I can only sink so low/cause I'm a man who seeks high places/searching for the common ground." It's a nice, positive song to open the album.

"Boom Sh-Boom" is a totally fun song with a good groove. It even has little jokes on the guitar. And about two minutes in, there is an excellent instrumental section, where Martin's voice counts as one of the instruments. A wonderful song.

"Always Got Away" Highlights Martin's Voice

On "Always Got Away," Martin's incredible voice is really allowed to shine. The piano, guitar and backing vocals are brought down so that his voice takes charge. This song is one of the best on this album. Check out these lyrics: "knowing who I am/I thought I held it right here in my hand/but what I really didn't understand/is that these tears/old shame and hurt and fear/like everything else would just disappear/but it always got away/it always got away."

"Livin The Life" is probably the closest thing to a pop song on this album. That is, a pop song with a message - that people should lead the lives they've imagined for themselves. This song works as a friendly reminder for people to check in on their own lives. Martin sings, "are you livin the life that you always dreamed of/givin your time to the ones who make you smile."

"Sugarcoating," the album's title track, is a 9/11 song. It might seem a little late in coming, but it's a look back not only at that day, but at the subsequent wars - and particularly about the way the news handled these events. And about how the media continue to handle them, making the song still relevant and pertinent.

After all, what has changed? This song is about how the nightly news has become an entertainment news show. Of course this had been an issue long before September 11, 2001. Martin sings at the end of the song, "I believe somebody gonna tell it like it is." And isn't that what he's doing? Certainly.

"Stick Around" Has A Beatles-Type Feel

"Stick Around" is a seriously catchy song, deliberately reminiscent of The Beatles (particularly the strings and backing vocals). The lyrics even mention "Abbey Road": "fear is what made me say/the stupid thing I said that day/and I tried to take it all back/with a copy of Abbey Road." The song also has a fun little ending.

"Shane" has an excellent guitar part. This song, more than the others on this album, is suggestive of Martin's early work - with even a spoken word section.

"Wants Out" is a beautiful sad song, with excellent lyrics. Martin sings, "My heart is a burning house/and the fire wants out." This is possibly the best song the album.

The album concludes with "Just To Be Alive," a mellow song that is perfect for a late night. The slow build late in the song is really nice.

Martin Sexton has one of the most powerful and interesting and innovative voices in music. It must be tempting at times to show his range on every song. If he does indeed feel those temptations, he certainly is able to resist them. He's mature and in control, and doesn't seem to feel a need to impress anyone with his quite impressive talents and range. He lets the material dictate what his voice will do. And the material is good. The songs on this album are strong, fun and enjoyable.

Other Musicians On The Album

Sugarcoating will be released on April 6, 2010 on Kitchen Table Records.

For those folks who haven't had a chance to see Martin Sexton perform live, there is good news. He'll be touring the country in April and May in support of this new album. Martin has always done great concerts, and this will be a treat for anyone who's yet to see him, and of course for those who already know how amazing he is.