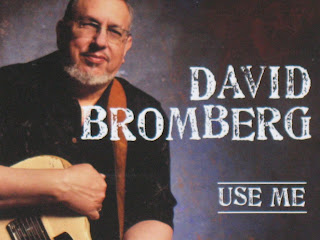 Most music fans are probably already well aware of David Bromberg and his contributions to folk and popular music. But for those who are as yet unfamiliar with him, this new CD will provide the perfect introduction, for it features other musicians you are sure to know.

David Bromberg has never had trouble gathering good musicians around him. And good musicians are also happy to have him play on their recordings. He has played with Bob Dylan, George Harrison, Ringo Starr, Willie Nelson and Carly Simon. And for this album he's asked some well known and talented folks to play with him. People like John Hiatt, Linda Ronstadt, Tim O'Brien, Levon Helm and Dr. John.

This isn't the first time he's had amazing guest musicians on his albums. Jerry Garcia, Phil Lesh, Bill Kreutzmann and Keith Godchaux of the Grateful Dead all appeared on his 1972 release Demon In Disguise (which by the way is an excellent record).

On Use Me, David Bromberg performs songs from several various genres, all of which he seems equally at home with.

Use Me opens with "Tongue," a catchy blues number written by David Bromberg (his only original song to appear on this album). Levon Helm is on drums, and the song features some great moments with him. (Levon Helm is of course most famous as the drummer for The Band - he also sings lead on what is probably their best song, "The Weight.")

"Tongue" features a horn section and some amusing lyrics, like "I'll tell you the truth, little girl/You're not the best thing this child ever had" and "Oh relax, honey, you didn't break my heart." It's wonderful the way he is almost shouting, almost spitting out the lines toward the end. And "Tongue" has what is probably the best final line of any song I've ever heard: "You'd best get your tongue out of my mouth, because I'm kissing you goodbye."

"Ride On Out A Ways"

"Ride On Out A Ways" was written by John Hiatt, who also plays electric guitar on this track. This is a mellower tune. It reminds me a bit of Van Morrison. John Hiatt is known for writing such songs as "Sure As I'm Sittin' Here" (a hit for Three Dog Night) and "Have A Little Faith In Me."

"Bring It With You When You Come"

"Bring It With You When You Come" is some fun acoustic folk. Written by Gus Cannon, this song features Levon Helm on drums, Larry Campbell on mandolin, and Lincoln Schleifer on upright bass.

This is the best of that back porch jug band type of tune (in the same vein as "Deep Elem Blues"). With lines like, "I ain't no ice man/Ain't no iceman's son/But I'll keep you cool 'til your iceman comes," this is one of my favorite tracks from this CD.

Larry Campbell produced this one. Campbell is well known for his work with Bob Dylan, and he's also played with Judy Collins, Linda Thompson, Willie Nelson and Little Feat, among others.

"Blue Is Fallin'" was written by Tim O'Brien, who also plays mandolin on this track. (He also provides backing vocals.) This song also features some nice work by Stuart Duncan on fiddle. This is a wonderful song, with lyrics like, "I want to dig a hole so deep and wide/I can bury all the hurt and the pain inside/I'm afraid of myself, and I'm afraid for you." David Bromberg's work on guitar is particularly good on this one.

Tim O'Brien is known for his work in Hot Rize, and for his extensive solo career.

"You Don't Wanna Make Me Mad"

David Bromberg dips into a bit of funk with a blues edge on "You Don't Wanna Make Me Mad," a tune featuring Dr. John on piano. Written by Mac Rebennack (Dr. John) and Velma Allen, this song has some great lines like, "I got the perfect rope for hanging around your neck."

David performs this song in part as almost spoken word, particularly at the end on lines like, "You know, everybody needs a little bit of space every now and then/This is my now and this is my then."

"Diggin' In The Deep Blue Sea"

Next he goes much more fully into the blues with the slow and intense groove of "Diggin' In The Deep Blue Sea." Featuring Keb' Mo' on electric guitar, this song was written by Kevin Moore (Keb' Mo') and Gary Nicholson. This song is about our need for oil, comparing it to a drug, calling the world a "junkie all strung out on gasoline."

This track also has Glen Patscha on keyboards, Tim Luntzel on bass, and Tony Leone on drums.

"The Long Goodbye" was written by David Hidalgo and Louie Perez, and features all of Los Lobos. This track definitely has that great Los Lobos feel - as good as some of their best work (like their Kiko album).

"Old Neighborhood" features Widespread Panic, and is jam band rock with a bit of a funky vibe.

"It's Just A Matter Of Time"

"It's Just A Matter Of Time" is one of the album's coolest tunes. It features Linda Ronstadt on backing vocals. This song has an easy going acoustic feel. David Bromberg's vocals are really good on this track, maybe driven to excellence by Linda's presence.

"It's Just A Matter Of Time" was written by Brook Benton, Belford Hendricks and Clyde Otis. Benton's recording of it reached #3 on the Billboard Hot 100 in 1959.

The album concludes with its title track, "Use Me." Written by Bill Withers, this song has a great R&B groove. Andy Kravitz in perfect on the drums. Anthony Bell adds some nice touches on keys. This insanely cool song has lyrics like "Yes, I wanna spread the news/That if it feels this good getting used/You just keep on using me/Until you use me up." This track was produced by Phil and Joe Nicolo, The Butcher Bros., who have also produced albums for John Lennon, Bob Dylan and Nine Inch Nails.

CD Track List
Use Me is scheduled to be released July 12, 2011 on Appleseed Records.

I had the good fortune of seeing David Bromberg in the late 1980s at a small venue in Massachusetts. That show stuck with me all through the years. And now a national tour is in the works to support this album. I highly recommend you go see this guy in concert.
Posted by Michael Doherty at 7:20 PM