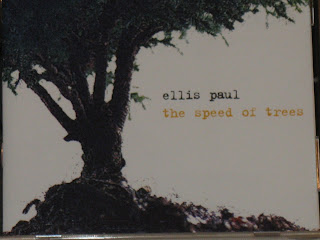 Ellis Paul is one of the best songwriters. Period. And he has a wonderful voice. Add to that an incredible stage presence, and it's no wonder why people go to his concerts over and over.

The material on this album is among the best Ellis Paul has ever recorded. The Speed Of Trees is an incredible album.

Ellis Paul starts the album off with "Maria's Beautiful Mess," a song with which he often opens his live performances. It's one of the best songs he's ever written, and that's saying something. The lyrics are excellent. Here is a taste: "And she loves like it's thirst/Like she's never been hurt,/She's dancing just like nobody's watching." This is a great version of the song.

"Give In, Give Up"
"Give In, Give Up" is another of his best songs. It's so beautiful, and so positive, especially when he sings, "And the colors we choose/Are yellows and blues/Let's paint the sky over and over." His voice is amazing on this song. "The dance comes down to this/Every love will bring a risk."

"Eighteen" is just a great song, and Duke Levine has done some wonderful work on this version.

"If You Break Down"

"If You Break Down" is a sweet and quiet song of reassurance. Ellis sings, "And if you break down/I'm at your shoulder/Take me at my word/You can break down/I will tell you over and over/A reliable sound is coming around/If you break down." Who doesn't want to hear that?

"When We Begin" is another quiet, sweet beautiful song. The chorus is "Tell me the story/Of all your past glories/The lovers, the losers, the friends/Spill all your magic/The good times, and the tragic/Tonight will this mystery end?/When we begin." Wonderful.

Woody Guthrie Song, "God's Promise"
"God's Promise" is a song whose lyrics were written by Woody Guthrie. Woody Guthrie wrote something like 4,000 songs. Most of these were never recorded. The Guthrie family has been allowing certain musicians and singers to look through these unrecorded songs, and choose from them songs to record. Billy Bragg & Wilco put out two albums of songs from this collection. Ellis Paul chose to record "God's Promise."

"The Speed Of Trees"

The album concludes with "The Speed Of Trees," the title track. Ellis Paul wrote this song in Big Sur, and it's a really cool song. The lyrics include, "Your love makes me move at the/Speed of trees/I've laid down some roots/I've grown a head full/Of make-believes/But if it weren't for that face of yours/I'd be rattling windows blowing down doors."

Musicians On CD Include Duke Levine and Lucy Kaplansky

Ellis Paul wrote all of the songs on this CD with the exception of "God's Promise." Duke Levine produced the album.

Posted by Michael Doherty at 9:08 PM