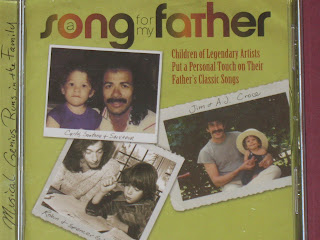 For Father's Day, why not make him a mix CD of songs that celebrate the father/child relationship? Here are some suggestions of songs to include.

In this economy, one possibility for Father's Day is to make a mix CD. While cheaper, it shows a lot of thought and effort and is much more personal than, say, a tie.

There are a lot of songs that explore different aspects of the Father/Child relationship. Here are a few of them.

"Father And Son"
"Father And Son" by Cat Stevens illustrates both sides of the father/son relationship. These lines are from the father's perspective: "I was once like you are now, and I know that it's not easy/To be calm when you've found something going on/But take your time, think a lot/Why, think of everything you've got/For you will still be here tomorrow, but your dreams may not." This song was included on his incredible album Tea For The Tillerman. It was also, interestingly, included on both Greatest Hits and Footsteps In The Dark: Greatest Hits Volume Two - the only song to appear on both releases.

"Cat's In The Cradle"
"Cat's In The Cradle" is an incredible song by Harry Chapin. In this song, the father is sadly busy and away during the son's formative years. Then when the son has grown up and become a father himself, the father feels the other side of it. The last verse is, "I've long since retired and my son's moved away/I called him up just the other day/I said, 'I'd like to see you if you don't mind.'/He said, 'I'd love to, dad, if I could find the time/You see, my new job's a hassle, and the kids have the flu/But it's sure nice talking to you, dad/It's been sure nice talking to you.'/And as I hung up the phone, it occurred to me/He'd grown up just like me/My boy was just like me."

A Song For My Father

There is a compilation album titled A Song For My Father (2007), featuring the sons and daughters of famous musical artists performing their fathers' songs. It includes a version of "Cat's In The Cradle" by Jen Chapin, Harry's daughter. It's a really good version.

Ellis Paul
Ellis Paul's "Father To Son" was included on his first release, Urban Folk Songs, which originally was available only on cassette. "Father To Son" is a beautiful song. Here is a taste of the lyrics: "When I have my children/A father to my son/A builder of his confidence/Each brick for what he's done/ I will build the highest tower/To the highest, whitest cloud/And put my son upon it/And watch him sitting proudly."

Greg Brown
There are many Greg Brown songs about fathers. One of the best is called "Cheapest Kind," off his 1988 release, One More Goodnight Kiss. The lyrics include, "Dad and me would stop by the store when the day was done/Standing at the counter he said 'I forgot to get the peaches, son'/'What kind should I get?' I said to him there where he stood in line/And he answered just like I knew he would, 'Go and get the cheapest kind.'"

"Daddy's Song"
"Daddy's Song" is one of the best Monkees songs. It was featured in their full-length film, Head (1968), and on the accompanying album. The sequence in the movie to feature this song is possibly the best scene in the film, where Davy Jones and Toni Basil have an incredible dance number (which was choreographed by Toni Basil).

Here is the first verse: "Years ago I knew a man/He was my mother's biggest fan/We used to walk beside the sea/And he'd tell how my life would be/When I grew up to be a man/Years ago we used to play/He used to laugh when I ran away/But when I fell and hurt my knee/He used to come and comfort me/And the pain would go away."

Brent Mydland, the keyboardist for the Grateful Dead from 1979 to 1990, wrote a beautiful song to his daughter. It's called "I Will Take You Home," and it's included on the band's 1989 release, Built To Last. Here is a taste of the lyrics: "Ain't no way the Bogeyman can get you/You can close your eyes, the world is gonna let you/Your daddy's here and never will forget you/I will take you home."

Violent Femmes
And for the dad with a sense of humor, why not throw in a couple of odd tunes, such as "Gimme The Car"?

Was (Not Was) also has a song titled "Somewhere In America There's A Street Named After My Dad."

Other Songs For A Father's Day Mix


These should provide folks with a few ideas on making a mix CD for Father's Day.
Posted by Michael Doherty at 2:38 PM