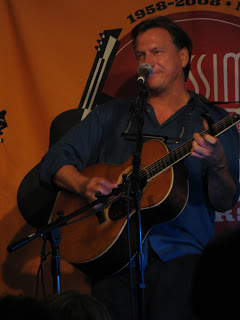 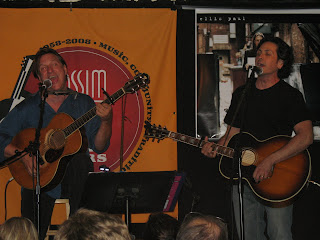 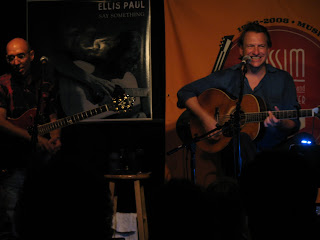 On Thursday, July 8th, Ellis Paul was handed a framed proclamation which declared that Friday, July 9, 2010 would officially be Ellis Paul Day in the city of Boston. Ellis Paul was having a private party at the Foundation Room at the House Of Blues to kick off a weekend of special concerts at Passim, in Harvard Square in Cambridge.

He performed a short set of songs that night, including "Rose Tattoo," "Maria's Beautiful Mess" and "Take All The Sky You Need."

On Friday, July 9th, Ellis Paul did the first two concerts of a five-show run at Passim. At each of the concerts he performed two albums in their entirety.

The first show - at 7 p.m. - featured his 1993 album, Say Something and his 1994 release, Stories. Behind him on the wall were giant posters of the covers for those two albums. He performed those albums in their entirety.

As way of introduction to the show, part of the Proclamation of Ellis Paul Day was read to the crowd. It was also joked that the following Tuesday from 3 to 5 p.m. would be Don Conoscenti Happy Hour. (Don Conoscenti played guitar and performed backing vocals for all five of the concerts that weekend.)

Ellis Paul talked a bit about the inspiration for some of the songs, and told the audience to ask questions about any particular songs if they felt the need. Of course, audience members took him up on this. For example, Ellis said that the character Tommy Bates in the song "Look At The Wind Blow" was based on a real person, Kurt Bates, who was from Ellis' home town. He also mentioned that Martin Sexton was part of the inspiration for "Trolley Car," that although not mentioned by name, he is the musician playing on the streets of Cambridge.

Loose Feel To The Concerts

The feel was loose during the shows, with a lot of joking, especially with Don Conoscenti. Also, Ellis had the lyrics to all of the songs on a music stand, as he hadn't performed many of these songs in more than a decade. And so of course there were some mess-ups. The audience helped him out with the lyrics to songs like "Here She Is." After "Angel," an audience member shouted out, "That must have been one you rehearsed." Don Conoscenti responded, "Not in that key."

And during the second show, an audience member actually sat next to him on stage during "Paris In A Day" to help him turn the page, as the lyrics to that song were on two sheets.

Also, during the second show, Ellis improvised a song about Don Conoscenti, "Buddha Bald Guy." And he made a reference to him in "Translucent Soul," changing the lyric from "Deeper than skin can go " to "Deeper than bald can go."

Jon Svetkey Joins Ellis On "Last At The Table"

During the second set of the first show, Jon Svetkey joined Ellis for "Last At The Table." This was a song from way back in the early days, and one that Ellis and Jon performed during their Tree Full Of Crows concerts. Jon Svetkey was also a member of End Construction, along with Ellis Paul, Jim Infantino and Brian Doser. He now plays with The Loomers. "Last At The Table" was definitely one of the highlights of the evening.

Audience members asked Ellis if these songs - or at least, some of them - might now be included as a regular part of his set lists for future concerts. Ellis responded that he'd continue to feature tracks from his newest CD, The Day After Everything Changed, for the rest of this year, but that next year he's considering doing a sort of nostalgia tour, in which he'd play lots of the older material.

Club Passim is located at 47 Palmer St. in Harvard Square, in Cambridge, Massachusetts. Ellis Paul has played at Passim many times over the years. In the very early 1990s, End Construction used to play at this venue. And in more recent years, Ellis Paul has done a series of New Year's Eve concerts each year - usually doing four concerts in two days. Don Conoscenti performs with him at those shows as well.

During the second set of the first show, Ellis said about Passim, "This is the second coolest place in Boston, outside of Fenway Park."