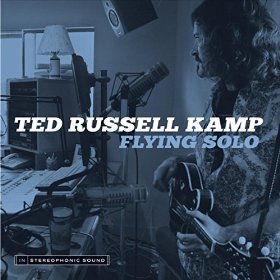 I was turned on to Ted Russell Kamp’s music last year when he released The Low And Lonesome Sound, a CD that was largely a solo effort, with just vocals and bass on many tracks. His new album, Flying Solo, is also – as the title will lead you to believe – largely a solo recording. Though he does have some guests on a few tracks. And on this one Ted Russell Kamp plays acoustic guitar, dobro and mandolin, as well as bass. But the focus is really on his soulful vocal delivery and on the songwriting. Flying Solo contains all original material, written or co-written by Ted Russell Kamp, and interestingly contains both studio recordings and live tracks.

Flying Solo opens with “Life On The River,” a studio track written by Ted Russell Kamp and Kirsten Proffit. Kirsten also plays rhythm guitar and provides harmony vocals on this beautiful track, a sweet and mellow love song. Here is a taste of the lyrics: “So make love to me tonight/Whatever’s wrong, gonna make it right/Keep me there ‘til the morning light like hallelujah/Be my baby all night long/I want to feel you coming on strong/And the river goes on and on and pulls me to ya.” I also really like this line: “The water washes over the rocks today, carrying a piece of the past away.” This is a wonderful opening track, and it’s followed by another studio track, “The Way Love Burns,” written by Ted Russell Kamp and Wayne Buckner. This is also a really strong track, about the effect of a woman on a man. Check out these lines: “And I can’t understand how time and again/I let you tear my world apart/You know how you had a hold on me/It’s a thing I can never explain/I guess when you love a woman like you/It’s bound to drive a man insane/A little bit more, and I’ll be over the edge.” This one is driven by his vocals and guitar, and it’s one of my personal favorites.

In “Hold On,” these lines really stuck out for me: “Now we can leave your past behind/Because someday soon you’ll find/You can hold on, hold on to me.” Nice, right? This song has a wonderful comforting quality, in large part because Ted Russell Kamp’s voice is one you can trust. Another of my favorites is “When She Flies,” which features Bliss Bowen on harmony vocals. There is something beautiful and kind of sad about this song. “Another bird caught in an airport/I hear the echoes of her song/The panes of glass become her prison walls/I pray she finds her way before too long.”

This CD includes a really nice rendition of “Let Love Do The Rest” that was recorded at WDVX’s Blue Plate Special in Knoxville in 2014. This song originally appeared on his 2009 release, Poor Man’s Paradise. While I do like that album version, I actually prefer this new live version, for it has a more raw and immediate sound. “Let Love Do The Rest” was written by Ted Russell Kamp and David Serby. “Lookin’ For Someone” is the oldest track on this release, recorded as a demo in Nashville in 2006. A different version of this song would be included on Kamp’s 2007 release, Divisadero (there titled “Looking For Someone”). The version here is heartfelt and raw.

Three tracks on this album were recorded live in Helsinki in 2011. The first, “Old Folks Blues,” is also a song from Poor Man’s Paradise. The version here sounds quite a bit different from that album’s version, for it features Kamp on vocals and mandolin, without a backing band. It is just as lively and energetic, but in a different way. “Now the thrills are getting cheaper/And the hills are getting steeper.” And I can relate, especially the past several days, to the lines, “I’ve got a bad back and a nasty cough.” But as he sings a few lines later, “Don’t you give up on me yet.” The second, “If I Had A Dollar,” is a country rock song from his 2011 release, Get Back To The Land, and is one that I saw Ted Russell Kamp perform with Funkyjenn last year. This live version features Tommi Viksten on electric guitar, and has a cool vibe. The third track recorded in Helsinki is “Steady At The Wheel,” a song that was recorded by Shooter Jennings in 2005 and also included on Ted Russell Kamp’s NorthSouth. The version on this new CD is quite a bit different from both of those earlier renditions. Here it is just vocals and mandolin, and I actually think this is a much better version. The album concludes with a version of “Poor Man’s Paradise” recorded live on KNBT’s Roots And Branches in New Braunfels, Texas in 2013.