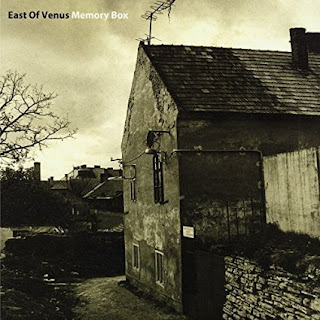 East Of Venus was formed more than a decade ago by members of popular and respected bands Winter Hours, The Feelies, Luna and The Bongos, and have now finally released their debut CD, Memory Box, featuring mostly original material but also a few good covers. The band is made up of Michael Carlucci on vocals and guitar; Glenn Mercer on vocals, guitar, organ, and percussion; Rob Norris on bass and backing vocals; and Stanley Demeski on drums. It’s great that this group finally put out a CD. But will this first album also be the band’s last? Singer and guitarist Michael Carlucci died suddenly in October of last year, at the age of 58. In addition to providing vocals and playing guitar, Michael wrote all of the original tracks on this CD. And the album is dedicated to his memory.

The CD opens with “Let’s Find A Way,” which has a good groove, a positive feel, and a bit of a psychedelic touch to its guitar, especially right at the start. Overall, it has an alternative independent rock sound, at moments making me think of some of the work of Bob Mould. The following track, “In The Sun,” has something of an early rock vibe, particularly during the chorus, and some serious lyrics, like these lines: “There’s a child sitting all alone/Looking kind of scared/He’s just a little shy/With his blackened eye/He’s not so unaware/And mother looks away.” But the song takes something of a positive spin with the following lines: “He’s gonna be all right in the sun/It’s gonna be all right when the sun hits the sky.” Jesse Carlucci provides backing vocals on this track.

“Jane September” is a very cool song written by Richard Mason and Kristen Yiengst, and originally recorded by Red Buckets, a band that Michael Carlucci and Stanley Demeski both played in during the 1980s. The song has a strong Lou Reed/Velvet Underground sound, both in the vocal approach and the feel of the music. Here is a taste of the lyrics: “Jane September looks away/She walks around on rainy days/Dances with a looking glass, dances with a looking glass.” Alli Arnold provides backing vocals on this track. It’s one of my favorites. Another favorite is “Who’s To Know,” with its steady and catchy groove and its great vocal line and its fun lead guitar part. What’s not to love about this track? “I never told you/The things I had to say/Well, you wouldn’t listen/You wouldn’t give me the time, time of day.”

They follow that with a cover of Tim Hardin’s “Reason To Believe,” a song that’s also been recorded by Rod Stewart, the Carpenters, Johnny Cash and many other artists over the years. This version has a bit more of a pop feel than a lot of versions, and it slides directly into “Wishing Well,” the song that gives the CD its title in the lines, “The memory box, it’s full of pain/Ten years later, we remain the same.” The album ends with a cover of The Rolling Stones’ “Citadel,” a song written by Mick Jagger and Keith Richards, and originally included on their 1967 record Their Satanic Majesties Request (and also covered by The Damned). The version on this CD is quite good, and plays up the Stones’ original psychedelic aspect mainly in the vocal approach.

CD Track List
Memory Box was released on April 15, 2016 through Omnivore Recordings, on both CD and vinyl.
Posted by Michael Doherty at 4:11 PM