Grateful Dead Meet-Up At The Movies 2016 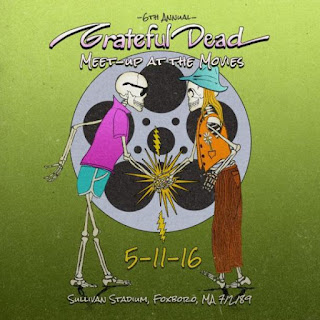 It's time for the sixth annual Grateful Dead Meet-Up At The Movies, and this year the movie theaters will be playing a show I actually attended. It was July 2, 1989 at Sullivan Stadium in Foxboro, Massachusetts. And it was a great show. I have a lot of memories from this show. First off, I didn't yet own a vehicle, so Chelsea's mom drove us. I forget just how far along we were in the drive before I realized I didn't have the tickets with me. Either Chelsea or her mom made a joke about me having the tickets, and I laughed until I realized that I had completely forgotten them. My friends will understand why these days I am super anal about checking everything multiple times. I think we must have stopped at a pay phone and called my dad, and he brought the tickets out to us wherever we were at the time. Traffic was insane getting to the stadium, so I think we convinced Chelsea's mom to drop off us off some distance from the venue, and we walked the rest of the way. I remember we ended up running into my cousin Bobby, who was... well, completely out of it. (Later I asked him how he enjoyed the show, but he had passed out and apparently never even made it inside.)

We had general admission floor tickets, and as I recall we were a bit in front of the soundboard, and slightly to the right (Brent side). Los Lobos opened the show. It was my first time seeing them, and I definitely enjoyed their set. At the time, I don't think I owned any of their records so my knowledge of their material was limited to what I'd heard on the radio (which was basically "Will The Wolf Survive?" and their Ritchie Valens covers). And then the Dead opened the first set with "Playing In The Band" into "Crazy Fingers," and we were stunned and overjoyed. Another thing I remember from the first set was the glider that was overhead at one point, dipping its wings in time to "To Lay Me Down." Some people since then have said I must have been hallucinating, but I was 17 at the time, and had not yet done acid (that would happen a year later). I'm wondering if the cameras caught that plane. I hope so.

I am excited to revisit this show. I bought my ticket last night, marking the first time I ever bought a movie ticket online. The 1st AD on a television pilot I worked on a few weeks ago gave me a gift card with which to purchase movie tickets, and so I put that card to good use. (Thanks, Marty!) I contacted Chelsea to let her know about this special screening. I'm not sure where she's living these days, but I'm guessing there will be a movie theater close enough to her that she can revisit this show too. Neither of us has any memory of how we got home. Obviously, someone must have picked us up. One other thing I remember was that I gave Chelsea my favorite Dead T-shirt to wear - a Space Your Face tie-dye. And at some point in the show (either between sets or maybe on our way out) I bought a Fire On The Mountain T-shirt from someone. I think I still have that Fire On The Mountain shirt, but I never did get my Space Your Face shirt back.

The concert will be shown at theaters across the country on May 11, 2016. Yeah, just one day. And I think each theater has only one screening. So check your local listings, and enjoy the show.
Posted by Michael Doherty at 11:49 AM