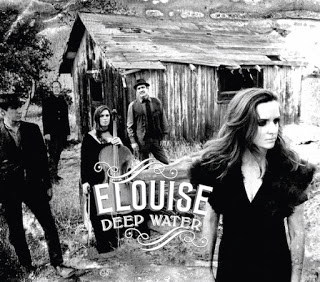 Elouise is a fairly new band dipping into the darker side of folk, bluegrass and gospel. Led by Elouise Walker on vocals, bandoneon and accordion, the band also features Richard Dembowski (from Old Californio) on vocals, banjo, guitar, bass, piano and harmonium; John Chamberlin on banjo, guitar, Marxophone and drums; Michelle Beauchesne on cello; and William Bongiovanni on bass. The band’s debut CD, Deep Water, contains mostly original material, with all members contributing songwriting, but also some startling covers of well-known songs.

The album opens with one of those covers, the oddest rendition of “I’ll Fly Away” I’ve ever heard. It begins with a kind of slow, mean sound, very different from the positive tones I normally associate with this song. You wonder if she’ll really be able to fly away, as she claims she will, and you get the sense she needs to. It’s a really interesting take on this gospel tune written by Albert E. Brumley. And then suddenly there is a somewhat pretty and uplifting instrumental section, with strings. John Philip Shenale does the string arrangement. A somewhat similar approach is taken on the band’s slow, haunted rendition of “Amazing Grace.” It gives more power to the phrase “a wretch like me,” because you really get the sense of her being wretched. And when she sings, “But now I see,” you get the feeling what she sees isn’t maybe what she was hoping for. And like the version of “I’ll Fly Away,” it is the instrumental sections of this song that have a more uplifting feel.

“Deep Water,” the CD’s title track, is an original tune, written by Elouise Walker. The harmonium and cello create an interesting texture at the start of this one. And then the simple, repeated strumming has such a sad, defeated sound, perfectly setting the mood before the vocals come in nearly two minutes in, asking for help: “I’m sinking fast/It’s murky and cold/Someone rescue me/I need a hand to hold.” But at the same time she sounds resigned to her fate, not desperate or overly eager for the help that likely won’t come. “I’m in deep water/I’m going down alone/In over my head/I’m sinking like a stone.”

That’s followed by “Saturn Bar,” a fun, mean tune written by Elouise Walker and Richard Dembowski. If you like Holly Golightly And The Brokeoffs, check this out. I’m pretty sure you’ll love it. It’s a seriously cool song. And the horns give it a dark New Orleans feel (Saturn Bar is a venue on St. Claude Ave. in New Orleans, and the song’s lyrics mention Louisiana:  “Along worn down edges of Louisiana streets we ride/Straight to an atmosphere where heaven and hell collide”). The horn arrangement is by David Stout. It sounds like voodoo jazz. This is one of my favorite tracks on this CD. “I’m lost in purgatory well after closing time.” I am also incredibly fond of “Black Horses,” which was also written by Elouise Walker and Richard Dembowski, featuring some wonderful stuff by John Chamberlin on Marxophone.

Richard Dembowski takes lead vocal duties on “Oh Lord,” a song that he also wrote. I fucking love these lyrics: “Oh lord, you’re just too hard to please/And you ask too much of me/And I ain’t gonna get on my knees/I ain’t get gonna get on my knees and pray/’Til you and I’ve got a few things straight.” How’s that for a fresh take on gospel? Richard Dembowski also sings lead on “I’ll Be Good To You,” a song which features Old Californio’s Woody Aplanalp on lap steel. “Evil” is an instrumental track featuring some gorgeous, sad work on cello and bass. “Evil” was written by Michelle Beauchesne and William Bongiovanni. It’s followed by the dark and thumping “Hurricane,” written by Elouise Walker and John Chamberlin. “Coming back with a vengeance/But your love’s already gone.”

Their cover of “Shadow Of The Pines” has a different approach from the earlier covers. Sure, it is a bit slower than the Carter Family original rendition, but it retains a kind of pretty folk sound, helped by the addition of Colin Nairne on mandolin. And hell, it was a fairly sad song to begin with. Elouise Walker sings, “All our future is overshadowed by dark despair/And across life’s path, sun no longer shines.”

The CD concludes with two more covers. The first is an unsettling, haunting, creepy rendition of “Silent Night.” Man, if it had sounded like this when I was a kid, it would have scared me. But it also might have kept me interested in religion and all that. I will certainly be adding this to my personal Christmas play list. Woody Aplanalp plays lap steel. And then the second is a cool, raw rendition of Link Wray’s “Fire And Brimstone.” They make it a wonderful bit of back porch bluesy folk, a strange lament sung by a possessed evangelist.