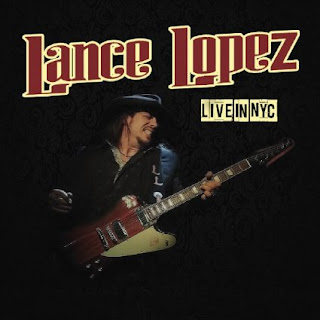 Live In NYC, the new CD from Lance Lopez, was recorded in New York in February of 2014 at a special concert celebrating Johnny Winter’s seventieth birthday. And you can certainly hear the celebration in the playing on these tracks. Here Lance Lopez does mostly his own material, playing several songs from his most recent studio release, 2012’s Handmade Music. He is joined by Chris Reddan on drums and Mike Nunno on bass.

This CD opens with “Come Back Home,” the tune that also opens Homemade Music. It’s a nice dose of blues rock, with a cool lead on electric guitar during the instrumental section. There is some wonderful energy here, and the CD is off to a fantastic start, going full steam ahead. “You’ve been gone a month/It don’t seem right/I’ve got to hug my pillow at night/Hey baby, won’t you come on back home/I can’t get no sleep, baby/You’ve been gone too long.” Oh yes, I totally understand the feeling. Then on “Hard Time,” the music gets a bit heavier in its groove and its approach. And why not? Clearly he has cause to be angry. After all, as he says, “You only needed me to share your misery/You spent my money/Now you drink your wine.” And then, “Loving you, baby, is like doing hard time.” “Hard Time” is also from Handmade Music.

The album’s only cover is Robert Johnson’s “Traveling Riverside Blues,” a song that Lance Lopez included on Handmade Music. This is obviously a heavier version than Robert Johnson’s original. Lance’s guitar at times reminds me of Led Zeppelin, which makes sense as Zeppelin took a lot of inspiration from older blues numbers, in many cases flat-out stealing them. In fact, Led Zeppelin took lines from this song and stuck them in “The Lemon Song,” a tune which itself is a rip-off of Howlin’ Wolf’s “Killing Floor.” And actually Led Zeppelin covered “Traveling Riverside Blues” as well (you can hear it on the BBC Sessions CD).

I find it a bit odd that in the introduction to “Lowdown Ways,” Lance asks the crowd, “Can I play a little blues for you all right now, is that all right?” After all, isn’t that what he’s been doing? Well, no matter. “Lowdown Ways” is a slower, very cool blues number in which Lance sings, “You’ve got to change, baby/You’ve got to change your lowdown ways.” Ah, you know a relationship is doomed if you feel the other person has to change in some way. But hell, maybe she will change. If anything can convince her, it will be that wild, fantastic electric guitar work during the jam. Holy moly! And he lets loose for quite a while. This tune is more than ten minutes long, and is my favorite of the CD. There are band introductions at the end of the track. By the way, “Lowdown Ways” was also included on Handmade Music.

The CD ends with a couple of tunes not from Handmade Music: “Tell The Truth” (a song that is supposedly going to be included on Lance’s next studio release, Texas Prophecies, an album that is a long time coming) and “El Paso Sugar” (from 2007’s Higher Ground). “El Paso Sugar” is a cool tune that begins with some good work on guitar. Then after a minute or so it kicks in to become a louder, more rocking tune. And Lance extends this one a bit too, nearly doubling the length of the album version. “I can’t get your taste out of my mouth.”

CD Track List
Live in NYC was released on April 15, 2016 on Cleopatra Records.
Posted by Michael Doherty at 6:30 PM