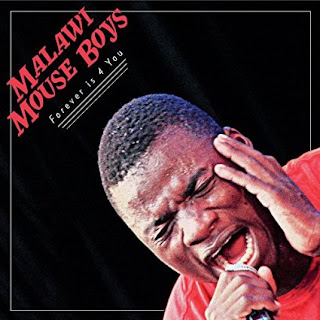 Listening to Forever Is 4 You, the new CD from Malawi Mouse Boys, you can’t help but think how music really is the universal language, having meaning for everyone (except, that is, for one woman I met years ago who didn’t like any music at all – but don’t worry, she’s long gone). And no, I have no idea what they’re saying on these tracks. But it doesn’t matter. You don’t have to speak Chichewa to feel connected to this music. The emotion is there, the passion is felt, the humanity is clear. Plus, it’s kind of a beautiful language (except, of course, for the tracks when they’re pretending to be mice and wasps). Part of me wishes the liner notes included English translations of the lyrics, but another part of me is pleased that such translations are not included, keeping intact the purity of the musical experience for those of us who don’t speak the language. The band members not only write material, but actually create their own instruments. That’s pretty impressive. And so I can forgive them the use of the numeral 4 in place of the word “for” in the CD’s title (something that ordinarily drives me into a fury). Forever Is 4 You is the band’s third CD release, following 2012’s He Is #1 and 2014’s Dirt Is Good.

“Chisomo,” the opening track, has a beautiful folk feel. “Ndiyenda Nkuunika” has a steady, insistent pulse beneath the earnest vocals. “Kulira Kwambewa” is both comical and frightening. The title is translated as “The Crying Of The Mouse,” and that’s precisely what it sounds like. The name of the band, by the way, comes from their day job, hunting mice and then selling them as snacks. (Please let them have quit their day job.) That’s followed by “Yesu Ndinkhulupirira,” a gorgeous gospel tune delivered a cappella. And then it’s back to weird animal sounds for “Mabvu,” an odd little track, imitating the sound of a wasp. And then perhaps someone having an allergic reaction to being stung?

One of my personal favorites is “Yasowa Mzeru,” which has a truly pretty and uplifting folk sound. The title is translated as “That’s Not Wise.” This is one that I do wish I had a translation for, and I wish I could sing along to it. It’s that kind of song. This is a wonderful track, and it’s followed by “Ian, A Blessing...,” which has a fun, cheerful sound, and even includes some whistling. This one also has some lyrics sung in English, about having been poor and thanking Ian for his help. (Ian Brennan produced this album, as well as the group’s two earlier releases.) There is also a lot of joy in the sound and delivery of “Mau A Mulungu,” as well as “Kuthokoza,” a track I am really fond of. By the way, this is perhaps the last CD on which I would expect to find a hidden track, but there is one.

CD Track List
Forever Is 4 You was released on April 8, 2016 through Omnivore Recordings.
Posted by Michael Doherty at 4:02 PM