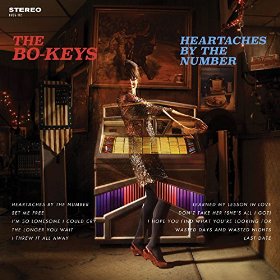 The first thing you’ll probably notice about Heartaches By The Number, the new CD by The Bo-Keys, is the cover, which has a 1960s pop feel, with the pretty woman, the jukebox, and the songs listed on the front. And the music certainly fits the expectations set up by that cover – a cool mix of soul, country and rock sounds. And the choices of covers for this release also fit that vibe, with tunes by Hank Williams, Bob Dylan and Floyd Cramer. The Bo-Keys have been around for nearly two decades, but if you’re not familiar with the band, you’re probably still familiar with some of their work. They played on Cyndi Lauper’s Memphis Blues album, which was produced by bass player Scott Bomar. They also appeared in the 2008 movie Soul Men. Marc Franklin has toured with Bobby “Blue” Bland, and drummer Howard Grimes has played with Al Green. These are talented musicians. The group also has some good guest musicians on this CD.

Heartaches By The Number opens with the title track, a song written by Harlan Howard and famously recorded by Ray Price. The Bo-Keys give it a fuller sound, with a soul groove and some nice touches on saxophone and keys. Don Bryant joins the band on vocals for this track. By the way, Cyndi Lauper recorded this song for her new country album, which will be released in May. “Heartaches By The Number” is followed by “Set Me Free,” which begins with a bit of spoken word. It was written by Curly Putman, and recorded by Tom Jones and Merle Haggard, among others. John Paul Keith plays acoustic guitar on this track.

The Bo-Keys deliver an interesting take on Hank Williams’ “I’m So Lonesome I Could Cry,” bringing it more into the realm of Otis Redding or Sam Cooke, with horns and organ. This is a very cool, soulful rendition. That’s followed by another favorite track, a cover of Merle Haggard’s “The Longer You Wait.” As you know, the world just lost Merle Haggard, and this track reminds us just what a great songwriter he was (though probably my favorite song of his is “Sing Me Back Home”). This song was originally included on Haggard’s 1966 record Swinging Doors. I love what The Bo-Keys do with this song, giving it a sound that reminds me a bit of some of Michael Nesmith’s work. And I love that pedal steel. I also like The Bo-Keys’ slow, soulful folk version of Bob Dylan’s “I Threw It All Away,” a song from Dylan’s Nashville Skyline album.

“Learned My Lesson In Love” is a fun soul tune. Here is a taste of the lyrics: “Seems like everything I do is wrong/Oh, it is/Cupid shot an arrow straight through my heart/I played with love, I got torn apart/Little did I know how fast I could go/From one hundred to zero.” They follow that with a cover of “She’s All I Got,” here titled “Don’t Take Her (She’s All I Got),” a song written by Jerry Williams Jr. and Gary U.S. Bonds, and previously recorded by Freddie North, Johnny Paycheck and Tracy Byrd. The Masqueraders provide some vocals on this track. “Wasted Days And Wasted Nights,” written by Freddy Fender, is one of the highlights for me, with a good early rock and roll feel. The album ends with a cool instrumental track, “Last Date,” written by Floyd Cramer and originally recorded and released in 1960. (You might also be familiar with the Conway Twitty version, which features lyrics that he wrote.)

CD Track List
Heartaches By The Number is scheduled to be released on April 29, 2016 through Omnivore Recordings.
Posted by Michael Doherty at 2:07 PM