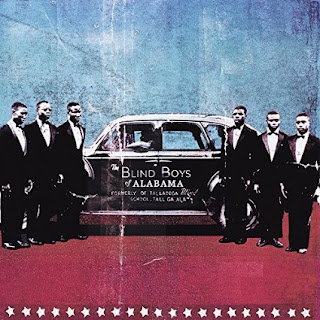 The Blind Boys Of Alabama are a gospel group that have been performing and recording for many decades. They formed in 1939, when they were just young boys. Spirit Of The Century, the 2001 release by The Blind Boys Of Alabama, is now going to be back in print, and with a lot of bonus tracks. This album finds them performing some classic gospel songs, while also covering tunes by Tom Waits, Ben Harper and The Rolling Stones. Three of the group’s founding members sing on this album. (George Scott died in 2005, four years after this album’s original release.) The bonus material was recorded live at The Bottom Line in New York in 2001, and was previously unreleased. This CD also contains new liner notes by Davin Seay.

The album actually opens with a Tom Waits song, “Jesus Gonna Be Here,” from his 1992 album Bone Machine. This is a really good rendition, beginning with Clarence Fountain’s vocals accompanied by just Danny Thompson on bass. And then the rest of the band comes in, but maintains a cool bluesy pack porch vibe. On this CD, they also cover Tom Waits’ “Way Down In The Hole,” from his 1987 record Franks Wild Years.

“No More” begins with electric slide guitar playing a bit of what sounds like “Amazing Grace” (which is interesting, particularly as the version of “Amazing Grace” on this CD sounds like another song). That’s David Lindley on electric slide, by the way. Jimmy Carter sounds great on lead vocals here, and he’s backed gorgeously by Clarence Fountain, George Scott and Joey Williams. “Down on my knees, down on my knees/I’m crying lord, if you please/I’ll never turn back no more.” I like this track a lot, in part because of the good groove by Michael Jerome on drums, but mainly because of the vocals. George Scott then takes lead vocal duties on “Run On For A Long Time,” a song that is also known as “God’s Gonna Cut You Down” and “Run On.” It’s been covered by a lot of artists over the years, including Johnny Cash, Odetta and Elvis Presley. The Blind Boys Of Alabama’s version was also included on compilation titled Real World 25.

One of my favorite tracks is “Good Religion,” which has a great bluesy feel and some delicious, passionate vocal work. Another favorite is their version of “Nobody’s Fault But Mine.” This too has a wonderful bluesy vibe, and they slow it down a bit, giving it more power. And those vocals are excellent. “If I die and my soul be lost, ain’t nobody’s fault but mine.”

The Blind Of Boys Of Alabama cover Ben Harper’s “Give A Man A Home,” a song from his 1995 CD Fight For Your Mind (an album that also has songs like “Power Of The Gospel” and “God Fearing Man”). This version by The Blind Boys Of Alabama has a fuller and more uplifting sound. And I like the addition of Charlie Musselwhite on harmonica. But perhaps the most interesting rendition here is this version of “Amazing Grace,” which is done to the tune of “House Of The Rising Sun.” It’s such an interesting combination, because of course the girl in “House Of The Rising Sun” has led a life she’s not proud of. Perhaps she’s not found grace, but she’s trying to keep her younger sister from making the same mistakes, so the line “Was blind but now I see” can certainly apply to her. (And if you’re wondering what the hell I’m talking about, then you’ve only heard The Animals’ version, which changes the gender and thus much of the feel of the song. Still, I do love that version.)

The first time I remember hearing “Motherless Child” was Richie Havens’ passionate version in the documentary film of Woodstock (and on the soundtrack). So I think I’ve measured every other version against that one, and this rendition by The Blind Boys Of Alabama stands up well alongside it. Does the very beginning remind you of the very beginning of Robert Plant’s “Big Log,” or is that just me? They follow that with a cover of The Rolling Stones’ “I Just Want To See His Face,” here titled “Just Wanna See His Face.” The original album then concludes with “The Last Time,” a gospel song that is usually titled “This May Be The Last Time,” not to be confused with The Rolling Stones song (though that song was very loosely adapted from the gospel song). The Blind Boys Of Alabama perform it a cappella, and it is another of this CD’s highlights.

This new re-issue contains seven bonus tracks, all live versions of songs from this album recorded at The Bottom Line in New York in 2001. The first is a wonderful rendition of “Good Religion,” followed by “Way Down In The Hole” and “Give A Man A Home.” Interestingly, the guitar at the beginning of this version of “Motherless Child” doesn’t remind of “Big Log,” but rather “Born Under A Bad Sign.” Again, it might just be me. At any rate, it’s a really good version. That’s followed by “No More,” “Nobody’s Fault But Mine” and “The Last Time.” I am particularly fond of this live version of “Nobody’s Fault But Mine.” Wonderful. There isn’t really much stage banter included on these tracks, but that's all right. These live tracks were previously unreleased.

CD Track List
This special expanded edition of Spirit Of The Century is scheduled to be released on May 13, 2016 through Omnivore Recordings. At the same time, their 2002 album Higher Ground is also to be released, also with bonus tracks.
Posted by Michael Doherty at 1:28 PM