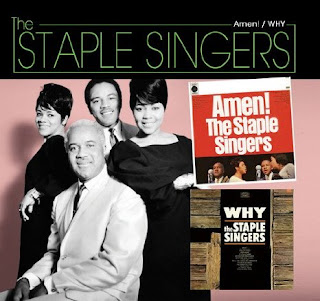 The Staple Singers had a good, long career, blending gospel, soul, folk and pop. Amen!/Why contains two complete albums that the group released in the mid-1960s on Epic Records. These records feature several traditional songs, as well as some originals, a few of which the group had recorded earlier on another label. You don’t have to be the least bit religious to enjoy these tracks; you just have to appreciate good, strong, passionate vocal performances. This CD features new liner notes by Gene Sculatti.

Amen! opens with “More Than A Hammer And Nail,” an upbeat song written by Roebuck Staples that features some very cool vocals, as well as some nice work on guitar. That’s followed by a nice, slow, serious rendition of “He’s Got The Whole World In His Hands,” with a great, rough quality to some of the vocals. I also really like the group’s arrangement of “This Train” (also known as “This Train Is Bound For Glory”), which has something of a mid-1960s rock vibe. “Samson And Delilah” is a song I first heard from the Grateful Dead (on Terrapin Station). This version from The Staple Singers is quite a bit different, but still very cool, moving at a good clip. “If I had my way, I would tear this building down.” That’s followed by “Nobody’s Fault But Mine,” another song that the Grateful Dead covered. This version by the Staple Singers has that great guitar hook, and some wonderful energy to the vocals. It’s a pretty short version, just under two minutes. Another highlight from this record is Roebuck Staples’ “Do Something For Yourself,” which has a nice, slow groove. Amen! concludes with its title track, a song written by Jester Hairston, and one I remember from my childhood. Amen! was originally released in 1965.

Why features more original material than Amen!, and opens with its title track, written by Roebuck Staples, with a spoken word section at the beginning about black students who weren’t allowed to ride the school bus. It’s a strong track to open the record. “Hear my call/I’ve done nobody wrong/But I’m treated so bad.” It’s followed by another track written by Roebuck Staples, “King Of Kings,” and then one written by Pervis Staples, “Step Aside.” “Step Aside” is one of the highlights. It has this great slow, steady groove. This record also features a really good rendition of “Will The Circle Be Unbroken.” It has kind of a relaxed vibe that I really like. Why ends with another great track, “Move Along Train,” featuring some particularly good vocal performances.

CD Track List
Amen!/Why is scheduled to be released on May 6, 2016 through Real Gone Music.
Posted by Michael Doherty at 10:35 PM