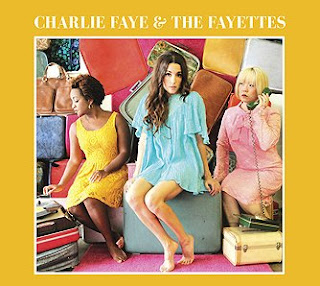 With Charlie Faye & The Fayettes, Charlie Faye’s new project, she explores her love of 1960s girls group likes the Shirelles and the Crystals. But the self-titled debut album is not a CD of covers. In fact, there are no covers here. All the tracks are originals, written or co-written by Charlie Faye (though “Coming Round The Bend” will remind you strongly of the Crystals’ “Then He Kissed Me”). This is fun pop with a very strong and totally delightful 1960s (and even 1950s) vibe. Charlie Faye is joined by BettySoo and Akina Adderley on backing vocals to round out that great girl group sound. And they are backed by a band that includes Eric Holden, Pete Thomas, Lyle Workman, Dillon O’Brian, Roger Manning and Steve Elson, with special appearances by Tony Gilkyson and Marcus Watkins. So you know they’re not just goofing around here.

This CD opens with “Green Light,” in which a woman urges her guy to pick up the pace a bit. Charlie Faye sings, “Don’t hesitate/Don’t make me wait/I’ll open up the gates/You’ve got the green light, baby, go.” Oh yes, I love an anxious, randy chick. But you know, sometimes we guys are a bit clueless, and it takes a woman being as straightforward as these gals are in this song to clue us in. We certainly appreciate it. “Green Light” was written by Charlie Faye and Craig Marshall. The group follows that tune with “Loving Names,” which has something of a western vibe and a familiar beat in certain sections. “All those loving names you used to call me/All those loving names are overused/All those loving names, they now appall me/Because when they hit my hit ears I can only think of you.”

“Heart” is so sweet, with a sound so innocent and delightful. Maybe it’s odd, but I started thinking about John Waters while listening to this song, as it seems like it would fit perfectly in one of his 1950s/1960s-type movies. And hey, when is John Waters going to direct another film? It’s been more than a decade. Anyway, this is a wonderful song. Here is a taste of the lyrics, sung to her own heart: “One day you tell me he’s the only one/The next day scare me off and make me run/Don’t be cruel, heart, to this poor fool/Who always listens to you.” And I like these lines: “They say to follow where you lead me/But you don’t know where you’re going.” Ah, you won’t be able to hear the line “Follow your heart” quite the same way again after this tune.

“Eastside” then has more of a rock and roll groove, with something of a soul vibe. Tony Gilkyson and Marcus Watkins join the band on guitar on this track. This one is a lot of fun, and with lyrics that certainly don’t lack something to say. “Now things have been changing every day on the eastside/People are moving, the hipsters are grooving, all right/New buildings going up/Old houses coming down/Who’s going to look out for the people/Who grew up in this part of town.” “Eastside” was written by Charlie Faye, Eric Holden and Dave Raven.

Another favorite is “One More Chance,” which has a wonderful R&B vibe. It’s a song about hoping life will give her another chance at a love, after she didn’t quite take advantage of the first opportunity. It’s a really strong track. “If life gives me one more chance/At a love like yours/I’ll take it/I’ll never, never ever walk away again/Never ask for more/Won’t forsake it.”

“Delayed Reaction” is another highlight. It is so ridiculously catchy and fun, a total delight. “Then there were days when I felt perfectly okay/I had myself convinced that I was on my way/But then some memory would sneak right up and say/So much for your plan of action.” And just when I thought it couldn’t get any cuter, this wonderful, though brief, instrumental section surprised me. “Delayed Reaction” was written by Charlie Faye and Bill Demain. The CD then concludes with “It’s All Happening,” a positive-sounding song which features Tony Gilkyson on guitar. “But now the words of love ring true/Just like this song I’m singing to you.”

CD Track List
Charlie Faye & The Fayettes is scheduled to be released on June 10, 2016.
Posted by Michael Doherty at 6:07 PM