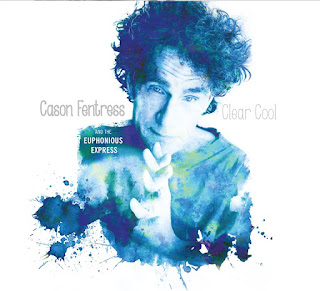 Clear Cool is the debut recording by Cason Fentress And The Euphonious Express, though Cason Fentress has been writing material since his childhood. Clear Cool features mostly original material, the exception being “Ahmad’s Blues.” In addition to lead vocals, Cason plays piano, keyboard, organ, marimba, vibraphone and percussion on this disc. And he has several talented musicians joining him. This album combines pop and jazz elements, with some touches of blues and even funk, to create a fun – and sometimes very cool – vibe.

The CD opens with “19th Century Dame,” which straight away has a good, light groove, with some nice work on horns. Sure, there is something just a bit goofy about the tune, about its flavor, but that’s part of its charm. There is a sense of humor here, as you can hear clearly in lines like “She loves to ride in the Learjet planes/Loves to take them down in glorious flames.” But there is also some really nice work on horn during the instrumental section. That’s Anthony Ware on alto saxophone. Clara Lofaro provides backing vocals. And on the following track, “Always Been Looking (For You),” Clara sings lead with Cason, trading lines in a song about a romantic night, with the right music playing. Anthony Ware solos on this track as well, this time on tenor saxophone.

The only cover on this EP is “Ahmad’s Blues,” a great tune written by jazz pianist Ahmad Jamal, with lyrics by Bob Shaw. Cason Fentress provides his own spin on this piece, even adding some lyrics; thus the title, “Ahmad’s Blues/Everything Goes.” Cason Fentress and pianist Matt King did the arrangement for this track. I really dig the piano during the instrumental section. Very cool.  Jared Gold also delivers some very nice stuff on organ. Clara Lofaro and Berlando Drake provide backing vocals on this track.

“Margaret Dear” has the strongest pop vibe of this album, with a certain 1970s thing happening, like a combination of Billy Joel and Steely Dan. The EP then concludes with “Hey Renée,” a cool track with some great work on electric guitar, and nice touches on vibraphone.