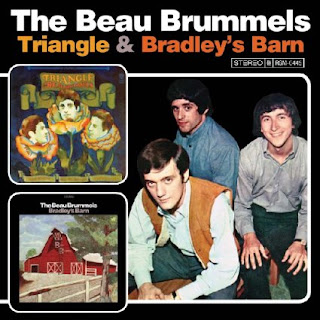 I admit that before listening to this CD I was familiar only with The Beau Brummels’ hits, “Laugh Laugh,” “Just A Little” and “You Tell Me Why.” I don’t think I’d ever heard any of the tracks from either Triangle or Bradley’s Barn. And that’s a shame, because the music on these two records is actually quite good, and much more interesting than those hits.  And now they’re being released on a single CD, thanks to Real Gone Music. There are no bonus tracks, but there are new liner notes by Richie Unterberger, as well as the albums’ original notes.

Triangle was originally released in 1967, the band’s fourth studio album, following the poorly conceived ’66, which was an album full of covers. Triangle features mostly original material, along with a couple of covers. At this point, the band was a trio, after the departure of John Petersen and Don Irving, and the band was dipping more into psychedelic sounds. Triangle opens with “Are You Happy?” which was written by Ron Elliott and Bob Durand. This song has a wonderful, bright folk-pop sound. “Are you laughing like you know you should be/You can whisper in my ear.” It’s a really good song, but things get more interesting with the following track, “Only Dreaming Now,” which features strings, a kind of European feel, and an unusual vocal approach. “I can feel her dancing/Dancing in the memory of when I saw her crying/Crying ‘cause our hearts weren’t lying/And we are only dreaming now.” “Only Dreaming Now” was written by Ron Elliott and Sal Valentino. Things get even stranger and deeper into psychedelia with “Painter Of Women,” with strong imagery and shades of Velvet Underground. “Painting the faces where no faces are/They are bizarre and lovely to see/Selling to emperors, kings and queens/Each of his dreams, each of his dreams.”

“The Keeper Of Time” is one of my personal favorites. It blends folk and psychedelic rock really well. “When the years all fall together/In a big parade/And the times of yesterday/Are lost in masquerade/Then you see, then you see.” And “Magic Hollow” has a fantasy vibe, its particular and unusual sound helped by the inclusion of harpsichord. It was written by Ron Elliott and Sal Valentino. Another favorite of mine is “Triangle,” the album’s title track, sounding like something that would have been at home on the Easy Rider soundtrack, deftly mixing folk and rock as it does. It has a really great feel.

Triangle ends with a cover, a nice, fun rendition of Randy Newman’s “Old Kentucky Home” (one of only two covers, the other being Merle Travis’ “Nine Pound Hammer”). This rendition actually predates Randy Newman’s own version, which would end up on his 1970 record, 12 Songs. This is back when Randy Newman wrote some great material, before Disney dug its hooks into him. Anyway, this version of “Old Kentucky Home” has a great back-porch feel, especially if that porch is in the Haight-Ashbury section of San Francisco in the 1960s and Owsley has provided the punch. I do wish it went on a bit longer; it fades out so soon.

Bradley’s Barn was originally released in 1968, and was the band’s final album. Well, that is until the Beau Brummels reunion in 1975. This record is more in the country rock realm, a direction many San Francisco bands were taking (though Beau Brummels maybe went in that direction a bit earlier than most). By the time of the recording of this record bassist Ron Meagher had left the band, and so the Beau Brummels were down to Ron Elliott and Sal Valentino. Joining them were Jerry Reed on guitar (yes, “Guitar Man”), David Briggs on keys, Norbert Putnam on bass and Kenneth Buttrey on drums.  Like the previous album, this one features mostly original material. Bradley’s Barn begins with “Turn Around,” a really good song written by Bob Durand and Ron Elliott. Here is a taste of the lyrics: “Barefoot girl, she’s buying winter clothes/Packing everything she owns and right away/Barefoot boy don’t care to see her go/Would give anything if she would only stay/Turn around, the summer’s almost over.” That’s followed by “An Added Attraction (Come And See Me),” which has an easy-going country vibe that is impossible to dislike.

“Deep Water” is one of my favorites from Bradley’s Barn. I really like its energy, its sound, and the honesty in lines like “And I’m in deep water/Wishing like a kid again/Yes, I’m in deep water/Won’t somebody come on in/To my life and love me.” “Deep Water” was written by Ron Elliott and Sal Valentino. I’m also really fond of “I’m A Sleeper,” which has a playful vibe. “Dropping pennies in a well that’s much too cold/Oh, why do I care/Is it I think that there’s wishes in there?” Like Triangle, Bradley’s Barn concludes with a good Randy Newman cover, this time the delightful “Bless You California.”
CD Track List
Triangle & Bradley’s Barn is scheduled to be released on May 6, 2016 through Real Gone Music.
Posted by Michael Doherty at 6:44 PM