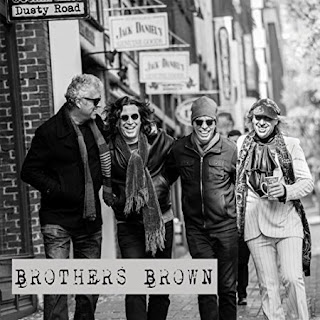 Brothers Brown is a band started by two men named Paul Brown, one who lives in Los Angeles and plays guitar (mostly in the jazz realm), the other in Nashville, playing keys (mostly in the blues realm, but is also now a member of The Waterboys). Both provide vocals. Joining them are David Santos on bass and vocals, and Pete Young on drums and vocals (both out of Nashville). These are all experienced musicians, as well as accomplished producers, and they recorded several albums’ worth of material in the past year. Dusty Road is the band’s first album, featuring all original material. This is some good, fun blues with some funky elements as well as some soul.

“Cup Of Tea” is fun choice to start the album. Sure, there is some blues here, particularly in the wonderful guitar work, but it also has a really good groove and energy, along with some playful lyrics (including “ooh-wee” backing vocals). “She’s my buttercup, my sugar plum/Lord, she’s my cup of tea/She’s like cherry wine/She’s so fine.” It’s a song about romance “down on the kitchen floor.” Clearly, their kitchen is bigger than mine. They then slow things down a bit with a straighter blues number, “Love Sake,” which features some really nice vocals. “So tell me where you’ve been, honey/When you’ve been out tempting fate/Don’t swallow your pride, honey/Just for pride’s sake.” Things get a bit funky with “Sweet Cadillac,” and I really dig the percussion. “She’s got more curves than Marilyn Monroe/She’s my sweet Cadillac.”

“When All Is Said Is Done” is immediately catchy, mostly because of its bass line, which I love. And they let the groove play a while before the vocals come in. And it turns out to be a rather sweet love song. “When all is said and done/You’re still the one I’m dreaming of/When I get up, when I get down.” Nice, eh? I really like this song a whole lot. But my absolute favorite is “The River,” with David Santos on lead vocals. It has such a great feel, kind of like The Band. And I love the lyrics. Check out these lines: “Take that steam ship down to Huntsville/Used to know me a girl down there/Don’t have the same face that I used to/But I don’t think that girl will care.” This isn’t just my favorite song of this CD, but one of my favorite songs of the year so far. This is such a great song, with soul and heart.

Another favorite from this album is “This Old Heart,” a great bluesy gem with a nice groove, tackling one of those perfect blues subjects – a love gone wrong. It opens with these lines: “Don’t tell me that you love me/You don’t mean it anymore/Don’t tell me that you need me, baby/While you’re walking out my door/I can’t take this kind of love/Girl, you just ain’t worth fighting for.” There is also a great instrumental section, with the guitar and keyboard working as if in conversation. That song is followed by “California,” perhaps the most interesting song on this disc, with the vocals delivered in a cool, intimate way. “I’m going to California for the girl I love.” I’m also really fond of “Drink You Off My Mind,” with Pete Young on lead vocals. This is another with just a great vibe. And check out these lines: “Well, I fell in love with you again this morning/When I woke up from another lonely night/And I went for the bottle there beside me/And I tried to drink you off of my mind.” The album concludes with its title track, “Dusty Road,” which is another highlight. “The radio plays to my soul, but it’s playing that same old song/And I’m tired of just holding on.”

CD Track List
Dusty Road was released on March 28, 2016 through Funky Joint Records and 335 Records. I’m looking forward to the band’s next release. In the meantime, they are playing their first U.S. gig on April 27, 2016 at City Winery in Nashville, and Little Feat’s Kenneth Gradney will be joining them for this show.
Posted by Michael Doherty at 1:47 PM