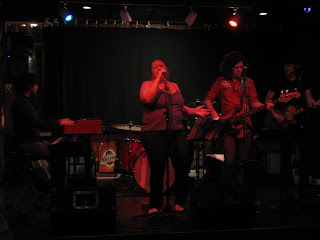 I became aware of Funkyjenn through Ted Russell Kamp, whose new CD I reviewed recently. On that album, The Low And Lonesome Sound, he does a tune called “Boom Boom,” which I learned is a song he also plays with Funkyjenn. And that’s what got me interested. So when I saw that Funkyjenn was playing at Ireland’s 32, a bar I used to frequent, and on a night I had off to boot, well, it was too perfect to pass up. Plus, I had a relatively late call in the morning, so no worries about hangovers. Some live music, some Guinness, and I am a happy boy.

Jenn had a great four-piece band supporting her, including Ted Russell Kamp on bass and backing vocals, Storm Rhode on guitar and backing vocals, Jeff Howell on keys, and Jim Doyle on drums. She opened with a couple of originals, showing the power of her voice, then did a nice rendition of “You’re No Good,” introducing it by saying, “You might know this one.” She followed that with “Marry Me,” which features some good lyrics like, “I want to swim in your ocean/I want to drown in your sea/I want to live inside you/I’m going to get you to marry me.” She then proved she could be sweet with her cover of Paul Williams’ “Ordinary Fool.” That song is from the film Bugsy Malone, which starred Scott Baio, and mention of his name began a little conversation between the band and certain members of the audience. (That movie, by the way, also stars a young Jodie Foster.) “Rock And Roll Voodoo Queen” is a good rock and roll song, though the music did drown out her vocals a bit on this one, and it was hard to make out all the lyrics. She ended the first set with “Nashville, TN.”

After a set break, the band came back with a cover of “Only You Know And I Know,” followed by an original tune which Jenn said is not on any of her CDs, and then a good cover of the country tune “There He Goes,” which was famously done by Patsy Cline. During the second set, we were treated to Ted Russell Kamp singing lead on three songs: “If I Had A Dollar,” “Dixie” and “Roll On Through The Night.” In his introduction to “Dixie,” Ted mentioned John Cougar’s “Jack And Diane,” which brought me back briefly to my very first concert (John Cougar opened for Heart). They then rounded out the second set with the wonderful “Butterflies Bleed” and the energetic “Shoulda Been My Lover,” both of which are on Funkyjenn’s Rock And Roll Voodoo Queen CD.

Here are the set lists. I apologize for the title I don’t know. 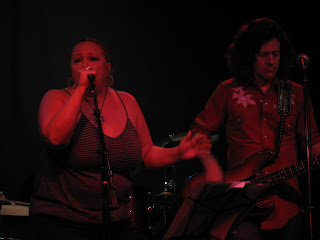 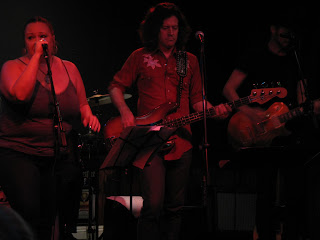 Posted by Michael Doherty at 10:02 PM