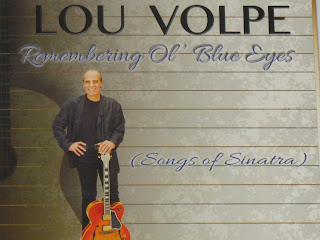 Jazz guitarist Lou Volpe’s new CD, Remembering Ol’ Blue Eyes (Songs Of Sinatra), features tunes that Frank Sinatra recorded and made famous. It’s interesting that a CD paying homage to Frank Sinatra is actually an instrumental album. After all, it’s not like Sinatra wrote any of these songs. What Sinatra is known for is his voice. That being said, this is a really good CD by an accomplished guitarist, capturing the spirit of Sinatra’s approach, his passion, and of course command of the material. Lou Volpe’s guitar work has a smooth, delicious flow, feeling effortless and clear, like speaking.  Lou Volpe is based in New York, and has recorded with many artists over the years.

The CD opens with a really good rendition of “I’ll Remember April,” a song written by Gene de Paul, Patricia Johnston, and Don Raye. This version has a good groove, and some nice work on drums by Buddy Williams, as well as wonderful work on guitar. Sinatra released his version as a single, and also included it on his Point Of No Return album.

One of Frank Sinatra’s most famous recordings is his version of “It Was A Very Good Year,” a song written by Ervin Drake and originally recorded by The Kingston Trio. Sinatra included it on his 1965 record September Of My Years, and his recording won him a Grammy. Lou Volpe’s rendition has more of a pronounced groove at the beginning, and some nice work by Leo Traversa on bass. There is also some nice interplay between guitar and keyboard, and then approximately halfway through there is a really cool and interesting section that makes me think of whales singing this tune. You’ll know what I’m talking about when you hear it. And Lou Volpe’s guitar really shines on the following track, “You Go To My Head.”

But one of my favorite tracks is Lou Volpe’s rendition of “A Foggy Day,” a song composed by George Gershwin and Ira Gershwin, and originally recorded by Fred Astaire. It was included on many Frank Sinatra records, including Songs For Young Lovers and Ring-A-Ding-Ding! As for Volpe’s version, in addition to some great work on guitar, this one features some excellent work on keys by Mel Davis. It does feel odd that it fades out, but that’s all right. You can never go wrong with Gershwin. Another song that Sinatra included on several records is “One For My Baby,” written by Harold Arlen and Johnny Mercer. Lou Volpe gives it a bluesy edge from the start, and his rendition isn’t nearly as mellow as many versions such as Sinatra’s version from Only The Lonely.

Another song that Sinatra really made famous is “That’s Life,” which was written by Dean Kay and Kelly Gordon, and originally recorded by Marion Montgomery. Lou Volpe’s rendition doesn’t have the same energy as Sinatra’s, and has a more bluesy feel, but still works well. “The Best Is Yet To Come” is another song closely associated with Frank Sinatra, though again other artists recorded it before he did. On this CD, Volpe gives it a bit of a bossa nova feel, with Gary Fritz on percussion. As a side note, “The Best Is Yet To Come” is the last song Frank Sinatra performed.

I love what Lou Volpe does with “All The Things You Are,” picking up the pace, his guitar flying over the wonderful groove by Leo Traversa on bass and Buddy Williams on drums. This is a total treat, and one of my personal favorite tracks. “All The Things You Are” was written by Jerome Kern and Oscar Hammerstein II. The CD ends with “Europa,” which was written by Carlos Santana, and is the one tune here not to have been recorded by Frank Sinatra. It is one of Santana's most famous compositions, and Lou Volpe delivers it as a guitar solo, dedicating it “to the Brilliance of Frank.”