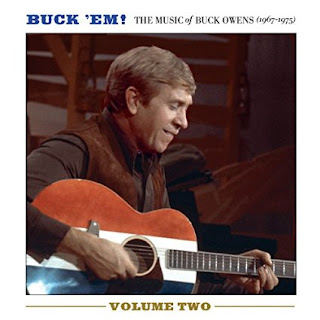 Two years ago Omnivore Recordings released Buck ‘Em! The Music Of Buck Owens (1955-1967), an excellent collection of fifty classic Buck Owens songs on two discs. It featured some rare recordings, but largely it contained the music that we usually think of when we think of Buck Owens. Now Omnivore Recordings is following up with Buck ‘Em! Volume Two: The Music Of Buck Owens (1967-1975), containing another fifty tracks on two discs. The music includes singles, album tracks, rare tracks, some live material, and some wonderful duets. For me, there are lots of delightful surprises here, with Buck Owens going in some directions I wasn’t really aware of before this. Here he covers a rock and roll tune, Chuck Berry’s “Johnny B. Goode,” does an original Halloween song, and does a country version of “The Cover Of Rolling Stone.” But there are, of course, plenty of classic country tunes in this collection as well. This two-disc set contains a booklet with excerpts from Buck ‘Em! The Autobiography Of Buck Owens, with details on some of the specific songs included in this set, as well as several photos.

The first disc opens with “Happy Times Are Here Again,” a peppy country number expressing joy about his woman arriving soon. “No more sleepless nights all alone/No more walking the floor ‘til dawn/Hugs and kisses from now on/Happy times are here again.” This song, along with “Sweet Rosie Jones” as its flip side, was released as a single in 1968. “Sweet Rosie Jones” is a sweeter, mellow tune. “And in her eyes I saw big trouble/Like the muddy waters down below.” Both of these songs also appeared on Buck Owens’ 1968 LP Sweet Rosie Jones. Also from that LP come “You’ll Never Miss The Water (Till The Well Runs Dry)” and “If I Had Three Wishes,” both of which Owens co-wrote with Don Rich. (The liner notes include a passage from the autobiography about Don Rich’s death from a motorcycle accident.) “If I Had Three Wishes” is a completely delightful, catchy tune. Check out these lines: “Wish I was a speckled trout a-swimming in a brook/And if you had a fishing pole, I’d jump up on your hook/Wish I was the evening star for everyone to see/I’d shine a little brighter every time you looked at me.”

The first real surprise of the album for me is “Things I Saw Happening At The Fountain On The Plaza When I Was Visiting Rome Or Amore,” an unexpected delight featuring some great work on guitar. This wonderful instrumental track was released as a single and also included on the LP The Guitar Player, and is one of my favorite tracks in this collection. It’s followed by an alternate version of “Darlin’, You Can Depend On Me,” a track that was previously unreleased in the United States. This is another great tune, the regular version appearing on “Tall Dark Stranger.” Another surprise for me is “Who’s Gonna Mow Your Grass,” which features some great fuzzy guitar by Don Rich. I love this country rock song.

Buck ‘Em! The Music Of Buck Owens (1955-1967) included “I’ve Got A Tiger By The Tail,” one of Buck Owens’ most famous songs. And this second volume includes a live version of it recorded at the White House on September 9, 1968 (and included on the 1972 LP “Live” At The White House). There is also a live version of “I’ve Got You On My Mind Again,” recorded in London in 1969, another of my favorite tracks. Recorded at that same concert is Buck Owens’ rendition of “Johnny B. Goode,” which includes an introduction and features some excellent guitar-playing as well as a great groove on bass. This live recording was released as a single, and it’s talked about in the liner notes to this collection. Buck Owens also covers Simon And Garfunkel’s “Bridge Over Troubled Water” and Cousin Emmy’s “Ruby (Are You Mad).” I don’t think I’ve ever met a Ruby in my life, but I must have heard at least two dozen songs about women with that name. Where have all the Rubys gone? Well, this version of the bluegrass tune “Ruby (Are You Mad)” is really good.

The first disc includes a wonderful duet with Susan Raye on “We’re Gonna Get Together,” the title track from an album they put out in 1970. There is also a really good duet with Bettye Swann on “Today I Started Loving You Again,” an outtake that was previously unreleased in the United States. Also previously unreleased in the U.S. is this early version of “Down In New Orleans,” recorded in March of 1970.

One of my favorite tracks on the first disc is “I Wouldn’t Live In New York City (If They Gave Me The Whole Dang Town),” partly because I feel the same way about that city. Here is a taste of the lyrics: “Where everybody’s trying to live beyond their means/Where all the natives hurry and scurry to and fro/But like fleas on a puppy dog, they’ve got no place to go.” I thought this song included sound effects, which I don’t appreciate, but the vocals were actually recorded on the street, so all those sounds are part of that recording. The liner notes include a photo of Buck Owens recording the vocals.

The line “When the love of your life turns into a waste of time” from “Something’s Wrong” is so depressing. I also love this line from “I Won’t Be Needing You”: “And when there’s nothing left of me, I won’t be needing you.” “I Won’t Be Needing You” was included on the 1973 LP Arms Full Of Empty, as was the following track, “It Never Will Be Over For Me.”

“Big Game Hunter” is a strange tune about an obsession with football leaving no time for anything else. It even has references to Batman and All In The Family: “Well, there ain’t gonna be no Batman and Robin take the place of the NFL/And for all I care old Archie Bunker can go right straight to/Well, what’s that you say/You made me miss a play/No, we’re not going to watch cartoons.” That song is followed by another silly tune, “(It’s A) Monster’s Holiday.” I’m excited to have a song to add to my Halloween play list. This song features lines like “Dracula was doing his stuff, breathing down my neck” and “There was screaming and moaning, wailing and groaning/Scary as a mummy’s curse/I said, good buddy, you may get me/But brother, let me tell you that you’re going to have to catch me first.” This disc also includes a goofy play on Shel Silverstein’s “The Cover Of Rolling Stone,” re-titled “On The Cover Of The Music City News,” with some new lyrics by Buck Owens and Jim Shaw. Lines like: “We got a big long bus with a driver named Gus/That shines our cowboy boots” and “And backstage ladies with furs and diamond rings.”  This is a live recording from Japan.

The second disc also includes a beautiful duet of “Somewhere Between You And Me” with Susan Raye, recorded live in New Zealand, as well a live recording of “Rollin’ In My Sweet Baby’s Arms,” a great fun bluegrass tune. This was recorded in April of 1974, and included on the album Live At The Sydney Opera House, and is another highlight. There are also two outtakes which were previously unreleased in the United States: “He Ain’t Been out Bowling With The Boys” and “A Different Kind Of Sad,” both recorded in the spring of 1975.