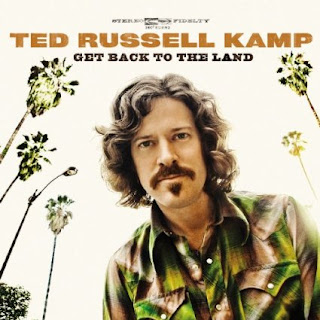 While Ted Russell Kamp’s new release, The Low And Lonesome Sound, is largely a solo effort, many tracks being just bass and vocals, Get Back To The Land, an earlier release, is a full band album, giving it quite a different sound. The band is Ted Russell Kamp on vocals, bass, electric guitar, acoustic guitar, Hammond organ, Wurlitzer, trumpet and trombone; Don Ian on guitar; Mike Sessa on drums; and Brian Whelan on electric guitar, Wurlitzer and drums. And this disc has plenty of guest musicians as well, including Carl Byron and Dave Raven (both of whom I saw play here in town with Anne McCue). It’s remarkable how deliciously incestuous the Los Angeles music scene is, with musicians all popping up on each other’s recordings. Ted Russell Kamp and Carl Byron both play on the Funkyjenn disc Rock And Roll Voodoo Queen, and actually Jennifer Gibbons provides the cover photo for Get Back To The Land. All of the material here is original, written or co-written by Ted Russell Kamp, and is mostly an excellent mix of country rock and folk, with some pop elements. There are a lot of strong tracks here, and the more I listen to this CD the more I love it.

The album kicks off with “California Wildflower,” a good pop tune, with sweet, positive vibes. Here is a taste of the lyrics: “California wildflower/Nothing like you/Underneath the blue/Blooms quite like you do/Rising higher/Shining brighter/Reaching to the sky/Girl, you got a fire/Burning inside you.” Dave Raven plays drums on this track, as well as on the following track, “If I Had A Dollar,” which is a fun country rock tune. I saw Ted Russell Kamp perform this song recently with Funkyjenn. “If I had a dollar, or if I had a dime/Even a million bucks ain’t enough to get you off my mind.” Ted Russell Kamp co-wrote this song with Nicole Gordon, who also provides harmony vocals on this track. (I think I first heard her on the Patrolled By Radar album Cards Gifts & Caskets Vol. 1.)

One of my favorites on this CD is “Lonelytown,” which Ted Russell Kamp wrote with Ted Wulfers, who also provides harmony vocals. This is a song about leaving and about staying behind, and depending on the perspective, one or the other will be in Lonelytown.  At first Kamp sings, “A year ago today/You took my heart away/And left me barely standing on the ground/The road called you again/Like it was your only friend/And then you turned and said, I’ll see you around/And left me here in Lonelytown.” And then at the end, the last line changes to, “And headed off to Lonelytown.” I love the line, “Some highways lead you home, and some just lead you astray.” This is a beautiful song. “(Down At The) 7th Heaven” also has a certain beauty to it, and features Robby Turner on pedal steel. Levi Sims provides harmony vocals. “Her hair was black as the coffee/That we drank on through the night/And my words worked through the thick skin/That held her pain inside.”

Another favorite of mine is “Aces & Eights,” which is country, but with the sense of fun of a great New Orleans jazz number. Angelo Moore plays saxophone on this track, and Dave Raven plays drums. “And with a fake ID, she was the prettiest thing in Reno/I said it don’t matter if we win or lose/As long as I’m walkin’ away with you/You and me are going to be the highest rollers at the whole casino.” “Aces & Eights” was written by Ted Russell Kamp and Shaun Ames.

As for great guest musicians, check out “Time Is A Joker,” which features Tony Gilkyson on guitar. Eric Heywood (from Son Volt) is on pedal steel, and Jason Sutter plays drums on this track (Sutter also appears on some tracks on The Low And Lonesome Sound). This tune has a more raw, mean sound, which I dig.

“Get Back To The Land,” the CD’s title track, opens with a reference to Woody Guthrie’s “Do Re Mi,” using that tune’s line “California is a garden of Eden.” The Woody Guthrie song is about the dustbowl folks heading to California, but not finding the paradise they were hoping for. “Get Back To The Land” starts in California, on the streets of Los Angeles, with lines like “The Sunset Strip and silver screens/Bills and booze and broken dreams” and “The bright lights of Hollywood are blinding/The stars are on the sidewalks and waiting in the wings.” And of course as you might guess from the song’s title, it’s about leaving the city and returning to the land. “Every city is Las Vegas, no matter what they say.” This is an excellent tune, featuring Kenny Vaughan on guitar. (You might have heard him on recordings by Moot Davis and The Trishas, among others.)
Carl Byron plays Wurlitzer on “Right As Rain,” a wonderful and moving song which also features Nick Nguyen on violin, viola and cello. “It was right as rain/Every touch in the dark and every spark/Every word you say/Every smile that lit the way/Like a burning flame/Turning nighttime into day.” “Right As Rain” was written by Ted Russell Kamp and Dave Berg. Daniel Glass plays drums on this track.

The album concludes with “Bottles On The Table,” a powerful song which features Eric Heywood on pedal steel and Gia Ciambotti on harmony vocals. “So you come to me/And let me feel your pain/But I’m too damn sober.”

CD Track List
Get Back To The Land was released on May 10, 2011 through Dualtone Music Group.
Posted by Michael Doherty at 10:31 PM