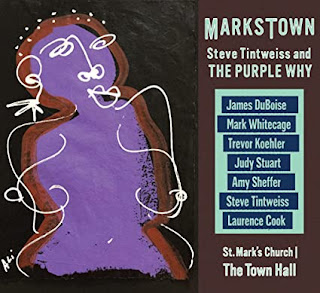 Last year I was turned onto the music of Judy Stuart through a posthumous release titled The Apostolic Session, a record containing two tracks recorded back in 1969. The music director and conductor on that release was bassist Steve Tintweiss, who also provided some vocal work. That record left me eager to hear more from these musicians. And now we’ve got it. MarksTown is an album of live recordings of Steve Tintweiss And The Purple Why from August and September of 1968. I’ve long considered 1968 to be one of the best and most exciting years for music, and this release is more proof that that is true. It contains all original material composed by Steve Tintweiss, and performed by The Purple Why. The band is made up of Steve Tintweiss on bass, melodica and vocals; Mark Whitecage on tenor saxophone and flute; Trevor Koehler on baritone saxophone,  James DuBoise on trumpet; Laurence Cook on drums; Judy Stuart on vocals; and Amy Sheffer on vocals. By the way, you might know Steve Tintweiss from his work with folks like Patty Waters, Burton Greene and Albert Ayler, and from his own group, Spacelight Band.

The disc’s first seven tracks are from the group’s performance at St. Mark’s Church-in-the-Bowery on August 21, 1968 as part of a benefit concert for Operation Airlift Biafra (the bill also included folks like Joni Mitchell, Joan Baez, Phil Ochs, Tom Paxton and Jimi Hendrix). The first track, “Bells Intro,” as its title suggests, is a very short piece with bells. That’s followed by “Ramona, I Love You,” which establishes a slow rhythm and has a somewhat plaintive sound in that repeated theme early on. The way that theme is presented with that slow pace makes it feel at times almost like it is creeping up on its object of love, which is interesting. I particularly love that loose percussion. There isn’t really a break between pieces, and the group drifts right into “How Sweet?” Right away it poses the question, “How sweet can you be?” There is a wildness to the delivery, a need. And then it is asked if the person can be sweeter. Ah yes, sometimes that is what we need, isn’t it? But I’m not sure what the answer is. This one too has a loose, improvised vibe. It is more like an atmosphere in which the musicians breathe and contribute various thoughts and comments. “How Sweet?” leads straight into the next piece, “Contrapuntal,” and here we enter a somewhat darker realm, with brief, punctuated ideas and thoughts. Steve Tintweiss uses a bow on his instrument, and there is a psychedelic element to the sound. That percussion section is exciting.

Sometimes it might feel like we’re going in all directions at once, as the title of “N.E.S.W. Up/Down” suggests, yet this track actually has a more straightforward direction, and that is Forward. Bursting forth and moving with some urgency, this track thumps and wails, with a sense of progress that won’t be stopped. Just listen to that trumpet pushing us all, urging us to make leaps, to not waste any time. Approximately halfway through the track, things then settle into stranger territory, Steve Tintweiss delivering some interesting and wild work. This is one of my favorite tracks. That leads into “The Purple Why Theme,” another slow-moving, rather hypnotic piece that pulls us right into its chest, enveloping us, though whether it’s for our protection or to smother us, who can say? That short set then concludes with band introductions.

The rest of the tracks are from the performance on September 14, 1968 at The Town Hall in New York City. “Universal Heroes” kind of eases in, and sounds like traffic moving through the city, car horns giving way to a sweeter and lighter communication among travelers. Steve Tintweiss is on melodica at the beginning before moving to the bass near the end. That leads straight into “Just Be Mine,” in which the saxophone is a prominent voice. And there seems to be no question, but that she will be his. This piece drives forward with some certainty, some confidence, leaving little behind. That section with the trumpet and bass is fantastic. And then those vocals have a surprisingly beautiful and ethereal quality, coming to view the proceedings to bestow upon them their heavenly approval.

As “Monogamy Is Out” begins, it feels like it is swaying dangerously, like it might collapse to one side or another. But then as it increases its pace, we get the feeling it is in the act of sexual congress. This one features more of those beautiful vocals, now a mix of glory and carnality which draws us in, seducing us with both aspects equally. And things get wild from there. This track is another of the disc’s highlights. That’s followed by “Space Rocks,” which begins with some interesting percussion, supported by bass. Before long, the percussion becomes more insistent, and things get even more interesting from there. This track includes an unusual and extended bass solo that begins somewhere in the middle of the track and dominates the second half. The disc concludes with a short track that is just the audience clapping, and then a shout of “We are all the universal heroes.”

Markstown was released on April 1, 2021 through Inky Dot Media.

Posted by Michael Doherty at 11:39 AM