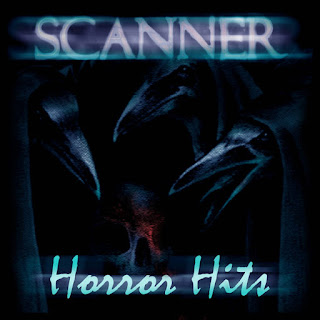 Scanner is a band that combines rock and punk music in original horror-themed songs, founded by vocalist and bassist Joe Brady and guitarist Junnie Fortney back in 1979. And for those keeping track, yes, that was two years before David Cronenberg’s Scanners was released. At that time, the band was called Toxic Shock. But as Joe Brady (Joseph Sirborg) tells it, he saw an article about Scanners in the magazine Fangoria about a year before the film came out, and was inspired to change the name of the band. The group broke up in the mid-1980s, and then reunited in 2012, primarily to record, but also to occasionally perform. They’ve put out several albums, including last year’s Horror Hits, this album featuring two drummers, Ray Hawkins and Troy Alwine, on different tracks. And joining the band on this album are Ken Matson on keyboards, and Leo “Doc” Dockery on backing vocals. The album features all original music.

Horror Hits opens with “Sideshow Train,” and right away I am digging that bass line, which promises some punk excitement. Like a lot of this band’s music, the song combines punk and rock. It is a song about a traveling sideshow. Do sideshows even exist anymore? I certainly hope so. Because, as they sing here, “It’s so good to be strange.” Then halfway through the track, they add more of a carnival sound, which is a cool and delightful touch. By the way, the group released a music video for this song, which features still photos from the sideshow world. “Passing through the towns in the night/Reflections of life in the lights/We’ll always live on the outside/We know we’ll never fit in.” That’s followed by “Membrane Men,” which also begins with a good bass line and is about some strange characters outside the normal scope of life, and the one person who encounters them. “Strange change membrane men, am I the only one who sees?/Strange change membrane men, and here they come again/Strange change membrane men, flying inside my brain.” Are they real, or is this song’s narrator possibly mad? Either way, it’s fun for us.

“Surfin’ Serpents” is an instrumental track. As you might guess from its title, there is a bit of a surf sound here. But it is certainly more rock than surf, with some really good work on guitar. If you’re out there in the water with these serpents, be careful. Then “Just Like Bela” is a hard rock number, sung from the perspective of someone who is alone and may be demented, with delusions of dark powers. Or possibly he does possess them. Who knows? “The world wants to put me away/I will be its master one day.” This song was also included on an earlier Scanner release, Splat. “Just Like Bela” is followed by “Frankenstein’s Flivver,” a great, solid rock and roll song, with a delicious energy, particularly in that guitar work. The song is a lot of fun, as you might have guessed from the title. Yeah, Dr. Frankenstein didn’t only create his monster, but also a car, and the race is on.  Of course, the line “Frankie made a man” also reminds me of The Rocky Horror Picture Show.

It is no surprise that a song titled “Splat” ends up being fun, and when the line is delivered, it feels sort of like those words splashing across the screen in the old Batman television show. And in this song, its title “Splat” is its only lyric, like “Tequila” or The Neptunas’ “Shark Tooth Necklace.” This song was also included on an earlier Scanner album, the title track to a 2016 release. That’s followed by “TV Light,” which isn’t necessarily a horror-themed song. I suppose it depends on what sort of television shows are on at the time. “I’ve gone inside the TV light/Walk inside a new dimension/Journeys lost in space and time/Dreams and wishes always coming true/A life inside the TV light.” Then comes “Under The Devil’s Tail.” A cool punk bass line and a great rock guitar line grab us right away, along with a good pounding beat. “I dare not look away/As the devil plays his hand/The ace of bloody skulls/Is a full house of the damned.” Ah, can you ever hope to win a game you play with the devil?  I want this song to be featured in some delicious low-budget video nasty.

The guys are clearly having a great time with “Switchblades And Leather,” particularly on vocals. Nothing serious here, just a lot of fun. Here we delve into a midnight horror film, and switchblades and leather might be in the film, or on those who are attending the film. It’s all combined at that hour anyway, right? “Night goes on and on/Switchblades and leather is the uniform/Walk down to the river’s edge/Switchblades and leather in your head.” This song, like the album’s first track, mentions a sideshow. The album then concludes with “Witches’ Moon” “In the light of the witches' moon/In the ghoulish, blue-white glow/Where the spirits sing and play/In the light of the witches' moon.” It’s like the darker side of “By The Light Of The Silvery Moon.”

Horror Hits was released on September 1, 2020. It’s never too early to start planning your Halloween play list. And besides, this album can help us celebrate that great holiday all year round.

Posted by Michael Doherty at 11:23 PM