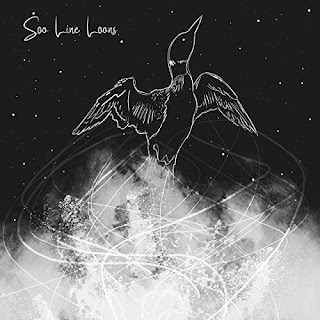 Soo Line Loons are based in Minneapolis, and are named after a railroad that runs through that city. The group formed only a couple of years ago, and in this short time, much of it dominated by a pandemic, has managed to record three albums. The second one, a wonderful, stripped down affair titled What Matters Now: The Quarantine Sessions, features this line in the title track: “All that matters now are the people you love.” That is a conclusion that many of us reached. Now, as we are beginning to pull ourselves out of this pandemic and getting a chance to once again see those we love, the band has put out its third album, a self-titled release, which features excellent original material. The band is made up of Grant Glad on vocals, guitar, bass, and mandolin; Erik Loftsgaarden on mandolin, guitar, banjo, keyboard, organ and backing vocals; Robin Hatterschide on drums, percussion and backing vocals; Kristi Hatterschide on violin; Sam Hall on bass; Hunter Hawthorne on keyboard and organ; and Matthew Fox on lap steel, harmonica and bass. The music is still largely in the folk realm, but readily straying into other territory, such as rock and blues, whenever it feels right.

This album opens with “Old Mill.” The band sets up the atmosphere first, with the sound of running water and a bird or something calling. Then as the song gets underway, a cool vibe is created, the violin a key element at the start, a somber sound before the vocals begin. Jeffrey Erbland joins the group on cello for this one. “Meet me down at the old mill, darling/Like way back when.” And at that moment, there is something of a timeless folk and country style, fitting with those lines. Things turn dark pretty quickly: “That water they anointed you with/Don’t give a damn if you can’t swim/Now God can’t hear you calling/So much for saving sins.” I love how this song hits a powerful moment like that so quickly. There is something ominous and dangerous here, and yet with a sound that is kind of catchy. In the second half, things slow down, dwelling in a strange place where the past has reached a bony hand into the present, and that violin offers some mournful thoughts. The song then kicks in again. This is a compelling opening song. At the end, we hear the water again, though it is not as calm now, but rather rushing along, the way life seems to. Interestingly, that sound of water becomes the background noise of a gathering of people as “Old Mill” leads directly into “Long Winter.” This one has a strong rock beat, some nice work on harmonica, and a vocal performance that sparkles with attitude. “Been a long winter and I’m wasting time/Been a long evening, too drunk to drive/Been a long winter, been a long winter.” Words that seem fitting as we ease out of this insane time of the pandemic. It’s a song about struggling financially, and the line “No work for seven months” stands out, particularly as that is the amount of time the pandemic had many folks on unemployment. At the end, we hear the sound of someone getting in a truck and driving off. Where to?

“Can’t Stop Singing The Blues” has a beautiful, uplifting sound from the start, that violin working to soothe us and raise us to some wonderful heights. The vocal performance then is more grounded, dealing with troubles that stretch from heaven to hell, leaving us in the middle. And yet this is kind of a fun track. “You drink yourself blind so you can see it through/But you can’t stop singing the blues.” That’s followed by “Die Young,” which has a bit of a funky vibe at the beginning, particularly that work on keys. There are also some nice touches on saxophone, giving this one a different sound and vibe from its opening moments. That’s Andy Meyer on sax. And Eric Anderson joins the group on keys for this one. “It ain’t romantic when it ain’t on the silver screen/But that’s okay/We don’t get to dress up like ol’ Blue Eyes/Or get by on the strength of our name/Ain’t got stars on Hollywood Boulevard/But we’re kings anyway.” Things get even more interesting and cool in the second half, with Shaniquea Mitchell joining on vocals. Then “Funktry” is a short, smooth song with a mellow, dreamlike 1970s vibe, featuring more good vocal work by Shaniquea Mitchell.

“Don’t Let Me Go” has a great, raw, tough, bluesy sound. It opens with these lines: “Truth is that I don’t care now/Just like my father warned/I’m out here on my own now/My faith replaced with scorn.” And then before the end he pleads, “Make me believe in something/Make me believe.” Then a gentle folk and country sound begins “What They Don’t Tell You,” one of my personal favorites. I love the vocal performance, that weary, worn quality working so well with the lyrics. Interestingly, this one too deals in part with a church, the song’s character employed to clear the church’s parking lot of snow. This one is about struggling with poverty and alcohol and loneliness. Check out these lines: “So I learned every line from every pamphlet in AA/And what they don’t tell you/Is that some things still won’t change/You’ll still be broke and unemployed/And your car still needs brakes/You can take your coffee black as a cave/It’ll never fill the hole/Of no one calling out your name.” Claire Altendahl plays slide guitar on this track.

“Hope” is one to raise your spirits. There is some joy here, some optimism to the sound, which we can all use. Right? You will probably be singing along before long, and maybe clapping along too. “I threw my guts up in the gutter as church folk passed by in their cars/It’s okay if we don’t believe/In the same exact things, just/Hope.” Charlie Parr plays slide guitar on this track. “Hope” leads straight into “Amen,” the album’s final track. This is a beautiful and moving song, featuring Christopher Becknell on violin. “Who’s gonna be there when I go?/Just some folks I used to know/Or will that preacher be reading to an empty room?” This one really grabs me. Haven’t we all had death on our minds lately, no matter our age?  It seems we are constantly reminded of the brevity of life, and how things move much too fast. This is another of my favorites.

Posted by Michael Doherty at 6:13 PM