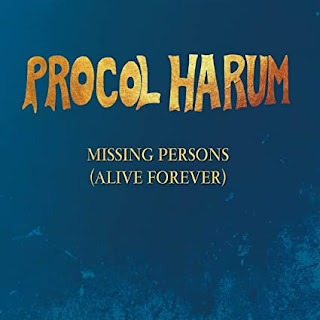 Procol Harum’s “A White Shade Of Pale” is one of my all-time favorite songs, in large part because of that distinctive and memorable work on organ by Matthew Fisher, inspired by the work of Bach. The group has gone through a number of personnel changes since the release of that single, disbanding in the late 1970s, then reforming in the early 1990s with most of the original members, and has continued in one form or another since then, though now with vocalist and pianist Gary Brooker as the only remaining original member. Even with that being the case, Procol Harum’s new EP, “Missing Persons (Alive Forever),” pulls me in right away by beginning the first track with some work on organ that could have fit right in with the group’s first album. Though it is now Josh Phillips who is on organ. The group is made up of Gary Brooker on vocals and piano, Geoff Whitehorn on guitar, Josh Phillips on organ, Geoff Dunn on drums, and Matt Pegg on bass. The music on this EP was recorded before the pandemic, but then completed during the time of isolation, and the songs certainly have a timely feel to them.

The EP opens with “Missing Persons (Alive Forever),” which was written by the band’s principal songwriting team, Keith Reid and Gary Brooker, the men not only responsible for “A Whiter Shade Of Pale” (along with Matthew Fisher), but also hits like “Conquistador” and “A Salty Dog.” It is a song about the brevity of life, and how easily people can slip from our lives. Here is a taste of the lyrics: “A baby is torn from her mother’s arms/The child that was born to be protected from harm/A river of tears and an ocean of pain/In the briefest of moments the whole world is changed.” Yes, as I mentioned, it is rather timely, while also touching on something that is timeless. Gary Brooker’s vocal approach has both the appropriate ache and a sense of hope. And in the second half, the organ is allowed to shine through again at moments.

“War Is Not Healthy” begins with a good, strong groove. Its main line is “War is not healthy for adults and children,” a variation of the line “War is not healthy for children and other living things,” which was the slogan for the anti-war group Another Mother For Peace. By the way, that group was founded in 1967, the year Procol Harum was formed and “A Whiter Shade Of Pale” was released. We can always use a good anti-war song like this one. And though this country is not currently in a state of war with another nation, there is a lot of violence everywhere you look. Until this country is ready to enact strict anti-gun legislation, any school, store or club could be a war zone. “It’s armchair warriors sucking their gums/It’s merchants of horror polishing guns/It’s praising the troops and waving the flag/It’s widows and orphans carrying the bag/It’s democracy, it’s lunacy, it’s history, it’s victory.” This track also has a cool instrumental section. This song, like “Missing Persons (Alive Forever),” was written by Keith Reid and Gary Brooker.

The EP concludes with a shorter version of “Missing Persons (Alive Forever).” The instrumental section before the final verse is shortened, and so gone is that cool organ part. And the closing section is a bit briefer as well. This version is approximately a minute shorter than the first version. I prefer the longer version.

Missing Persons (Alive Forever) is scheduled to be released on May 14, 2021.

Posted by Michael Doherty at 11:47 AM