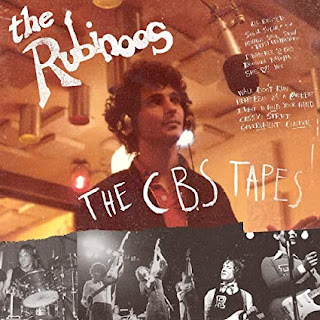 I first heard The Rubinoos in the mid-1980s when they had two songs on the Revenge Of The Nerds soundtrack (including that movie’s theme song), but the group had been around for quite a while already at that point. They actually started in 1970, when founding members Jon Rubin and Tommy Dunbar were only thirteen and eager to perform at a school dance. The group’s first official album was released in 1977, a self-titled effort that included a cover of the Tommy James And The Shondells hit “I Think We’re Alone Now” (a decade before another young teen, Tiffany, had her own hit with it). But the year before that album’s release, The Rubinoos had recorded another album, which until now had been left unreleased. Titled The CBS Tapes, it contains a mix of covers and original material, and has a deliciously loose vibe, the music a combination of pop, punk and rock. The band is made up of Jon Rubin on vocals and guitar, Tommy Dunbar on guitar and vocals, Royse Ader on bass and vocals, and Donn Spindt on drums and vocals.

This album opens with an original song, “All Excited,” which begins with a good, strong beat, and is a lot of fun. Of course the opening line, “Now I remember when I was a child,” strikes us as kind of funny, considering they were still in their teens when they recorded this. But there are some more surprising lines, such as “I picked me up a fork and knife/Started stabbing my little sister,” particularly as this song has such a cheerful vibe. It’s about being excited by rock and roll. They are clearly having a good time here, particularly in that section with vocals and drums. This one was written by Tommy Dunbar. They follow that with a cover of “Sugar Sugar.” This rendition features some playful vocal riffing throughout, yet it seems to be mostly in earnest, and it has all the right energy. It even includes a “cha cha cha” ending. So there. There is also some banter, including goofy band introductions, in their version of King Curtis’ “Memphis Soul Stew,” but man, check out that great bass line. They combine this song with a Pepsi commercial, credited to BBDO, the Pepsi advertising agency, and Joe Brooks (who would go on to write “You Light Up My Life”). It’s like they’re totally fucking around, and yet are playing the hell out of the song. They’re singing about Pepsi, and in doing so, making fun of the commercializing of music and the youth culture. They sing “You’ve got a lot to live, and Pepsi’s got a lot to give” like it’s an important anthem.

The Rubinoos move more firmly into the punk realm with “I Want Her So Bad,” an original number written by Tommy Dunbar. And, yeah, this one is also a lot of fun. They follow that with another original number, “Nooshna Kavolta.” The rhythm and vibe here are like something from a Stax record, but this is something else entirely, isn’t it? And what are they singing here? No idea, but I feel like dancing anyway. They then deliver a cover of The Beatles’ “She Love You,” the first of two Beatles numbers on this album. It is a pretty straightforward rendition. The second Beatles song is “I Want To Hold Your Hand,” and again, they give a fairly faithful rendition. It is interesting that for both covers, they go back to the very early days of The Beatles, to that band’s most cheerful and pop-sounding songs.

This album includes two instrumental tracks. The first is “Walk Don’t Run,” a jazz tune written by Johnny Smith, but made famous with a different arrangement by The Ventures. Oh yes, The Rubinoos give us a good dose of surf here (hey, do they surf up in Berkeley?), featuring some great stuff on guitar. The other instrumental track is a fun rendition of The Meters’ funky “Cissy Strut.” The Rubinoos also cover “Heartbeat, It’s A Lovebeat,” that delightfully cheesy song from The DeFranco Family. At the time, this song was only a few years old, and these guys totally dive right into it and deliver a good rendition, though in the middle they play around a bit. The album concludes with a cover of Jonathan Richman’s “Government Center.” As a side note, I met Jonathan Richman in the mid-1990s when he came to the radio station I was working at to promote a concert. He agreed to sign the liner notes to a CD for me, but when he signed his name he neglected to take the cap off the pen. He handed me back the pen and liner notes, and I looked at where his signature ought to be, took the cap off the pen, and handed him the pen and booklet again. He signed his name a second time without any indication he realized the trouble the first time around, and then once again handed the liner notes and pen to me, all without a word. That night he put on a fantastic show. Anyway, these guys do a great job with this song. At the end, they add some goofy lyrics about Governor Brown (after all, these guys are from California, not Massachusetts, like Jonathan Richman).

The CBS Tapes is scheduled to be released on June 25, 2021 on Yep Roc Records.

Posted by Michael Doherty at 8:13 PM