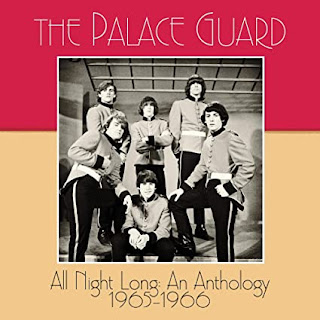 Before Emitt Rhodes joined The Merry-Go-Round, he was the drummer in a group called The Palace Guard, based in the Los Angeles area. The group recorded several singles, but never an LP, and Emitt Rhodes soon left them for The Merry-Go-Round and his solo career, being replaced by Terry Rae. The core members of The Palace Guard were brothers Don, John and David Beaudoin. The group was popular in southern California, but never really received a national audience, due at least in part, as we learn in the liner notes for All Night Long: An Anthology 1965-1967, to a decision by the band’s management. Crazy, right? Particularly as the tracks collected for this disc are really good. You’ll know at least two of the songs, because they were also recorded by other artists. And another was a local hit. But the entire disc is enjoyable. So take a little trip back to the mid-1960s with The Palace Guard.

The disc opens with its title track, “All Night Long,” an original song written by Don Beaudoin and John Beaudoin. This is a fun number with something of a garage pop sound. At moments, the harmonies might remind you of The Beach Boys, who were based in the same part of L.A. County, and some of the guitar work might call to mind The Byrds, another L.A. band. “All Night Long” was the band’s first single. It is followed by that single’s flip side, “Playgirl,” a mellower number written by Tudy Hudgings. This is one of those songs about a young woman who is the subject of some gossip. “Here’s what they say/She’s racing around in a foreign car/All made up like a movie star/Going too fast, going too far.” The next single is “A Girl You Can Depend On,” a cool number written by Russell E. Alquist. This one has a bit of a psychedelic vibe, and is one of my personal favorites from this collection. The group then gets more soulful on that single’s flip side, with a good cover of Wilson Pickett’s “If You Need Me.” This version is pretty faithful to the Wilson Pickett version, though featuring some fuzzy guitar. This is another of the disc’s highlights.

The song that was a local hit for the group is “Falling Sugar,” written by Paul Leka and Lawrence Rush. It has a delightful pop energy, and a kind of bouncy vibe which is catchy. By the time of this recording, Emitt Rhodes had left the band. That single’s flipside is an original number, “Oh Blue (The Way I Feel Tonight),” written by Don Beaudoin and John Beaudoin. “Oh blue is the way I feel tonight/Blue and broken inside/Let’s forget all our troubles/And never ever part again.” The band’s next single contains two songs that were popular for other artists. The first, “Saturday’s Child,” was recorded by The Monkees the same year as this version by The Palace Guard. It was included on The Monkees’ first album, and was featured on the television program. The song, which was written by David Gates, was also recorded by both The Spectrum and Herman’s Hermits the following year. The Palace Guard’s version is really good, with an ending that is different from The Monkees’ recording, with that cool harmonizing on “Seven days a week.” The flipside is a cover of “Party Lights,” and this version has quite a different flavor from that original Claudine Clark recording. “Party Lights” is a cute song, but not one I ever cared all that much about. It was kind of fun, but fairly forgettable. This version by The Palace Guard, however, moves and builds a wonderful energy, at times feeling like a celebration, like something from New Orleans. I love what these guys do with this one, especially that guitar work.

Then “Calliope” has a carnival sound. You’ll get the feeling you’re on a carousel yourself as you listen to it. This is an original song, written by Don Beaudoin and John Beaudoin. Interestingly, its flipside is also an original tune by Don Beaudoin and John Beaudoin. Titled “Greed,” it is for me the most interesting and exciting track on the disc. I particularly love that backing vocal work, which is kind of wild. This track is definitely worth checking out, especially if you enjoy 1960s music. The album concludes with the two tracks the group recorded with Don Grady for a single in 1966, the first being “Little People.” This one certainly has more of a pop vibe. It was written by Billy Page. The second is “Summertime Game,” which was interestingly written by Tudy Hudgings, who also wrote the group’s “Playgirl.” This song has a kind of sweet vibe. “Winter’s a long, long time/Why should I tell you my name/Boys who come in the summertime/Are playing a summertime game.”

Posted by Michael Doherty at 10:47 PM