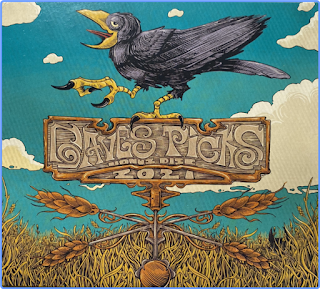 For those who purchase a year’s subscription to the Dave’s Picks series of Grateful Dead concert recordings, a bonus disc is included with one of the volumes. This year that bonus disc arrived with Volume 38. Volume 38 contains the complete show the Grateful Dead performed on September 8, 1973, along with two songs from the first set of the previous night’s show. The bonus disc contains most of the second set from that show, September 7th at Nassau Veterans Memorial Coliseum in Uniondale, New York. Only two songs are missing from that set: “Me And My Uncle” and “Loser.” By the way, there is also a little surprise tucked into the disc’s sleeve – a Dave’s Picks sticker.

The disc opens with “Here Comes Sunshine,” a song from Wake Of The Flood, which was released a month after this show. The song’s first line gives that album its title. But it’s the jam here that makes this version worth listening to. Jerry Garcia lands on a really good theme early on, and plays with it for a while, and things just grow from there. It is a solid jam and leads back into the main body of the song for the final verse. And then they are off into another good, bright jam before the end. Bob then talks about spending time in the studio, before introducing “Let It Grow” to the fans. Yes, on September 8th, they played the very first “Weather Report Suite,” and at this show they played the very first “Let It Grow,” the third section of “Weather Report Suite.” It’s interesting that the band recorded a studio version before playing it live, the opposite of how the band usually operated. Some songs were played in concert for several years before being recorded in the studio. Anyway, it’s a strong introduction of what would almost always be a powerful song for the band in concert. And, yes, they do jam on it, and that jam features some fantastic, frantic work on guitar, the pace picking up tremendously for a time, before relaxing a bit again and leading into stranger territory. Bill Kreutzmann is dancing on that drum kit, and everything is moving so well, and before we know it, the band eases into a stunningly beautiful “Stella Blue.” Seriously, this is a phenomenal rendition of a song that once had me in tears at Shoreline a couple of decades later. This is Jerry at his best. “There’s nothing you can hold/For very long.”

Bob then changes direction with a rousing rendition of “Truckin’” that gets me on my feet and dancing around my apartment. So much good energy here. There are hints of “The Other One” even before Bill’s drum solo. And then they explode into “The Other One.” I love that moment. This is probably the most exciting song the Dead ever played, in part because they would tackle it so many different ways, like a beast they were always attempting to tame. Here they ride it, just hanging on, as it jerks and bounces and runs, not trying to guide it or force it to obey their directions. Though soon band and beast have reached some understanding and move together. Bob never even attempts any of the lyrics, and once everyone is moving in the same direction, and things are under some semblance of control, Jerry leads them into “Eyes Of The World,” and right away you can tell the energy is just exactly right, and everything is flowing. Happiness seems to come rising up out of every note. And the jam is one hell of a beautiful and fun ride. This is one of the best “Eyes” I’ve heard. Possibly the very best? Yes, I think so. It begins to wind down, and it seems the band might follow it with a mellower song. But no, Bob leads the band into “Sugar Magnolia” to wrap up the set, and to keep us all dancing like unhinged, delirious sprites under the brightest full moon.

Posted by Michael Doherty at 6:29 PM