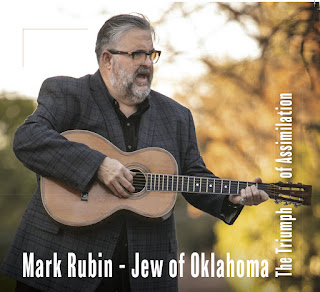 In the mid-1990s I hosted a folk and acoustic radio program on KWVA in Eugene, Oregon called “Dogs Run Free” (named after the End Construction song, not the Bob Dylan song). One of the bands that I got turned onto at that time, and played quite a lot on the air, was Bad Livers. They had their own cool style, and not a lot of groups were doing what they were doing then. It was exactly the sort of thing that I started the radio program to play. They broke up at the end of that decade, but the band members have kept active with solo careers. Mark Rubin, known as the Jew of Oklahoma (though he currently resides in New Orleans), offers some excellent original material on his new album, The Triumph Of Assimilation. A few of the tracks are based on Yiddish language poems, including two by Mordechai Gebirtig, who was killed by the Nazis in 1942. And in case you’re wondering, yes, Mark Rubin does play tuba on this release. Of course, he plays bass too, but also guitar, banjo, mandolin, banjo guitar, and percussion. And he is joined on certain tracks by guest musicians, including fellow Bad Livers member Danny Barnes.

The album opens with “A Day Of Revenge,” one of the tracks based on the work of Mordechai Gebirtig. And the first words seem to be, or at least sound like “Die, die, die.” This is a cheerful song of revenge, but not the sort of revenge you might have in mind.  Here Mark Rubin sings “Mankind will turn its back on war/I can see it clear on a distant shore/It’s coming here like Noah’s dove/A message of kindness, peace and love/That’s our revenge.” Oh yes, wouldn’t it be something to see that day in our lifetime? Dylan Blackthorne plays accordion, and Mark Hays is on drums on this track. That’s followed by “It’s Burning,” also based on a poem by Mordechai Gebirtig. This has an appropriately darker sound, a great raw folk vibe, a powerful and earnest vocal performance, and some interesting percussion. “Well, the flames have swallowed up our town/But your heads are bowed and you’re staring down/It’s burning/Well, there ain’t no rain, there ain’t no flood/We’ll quench these flames with our blood/It’s burning.” This is a song that urges people to take action, to solve the problem, rather than standing around with their arms crossed, defeated.

Then with “Down South Kosher,” Mark Rubin raises our spirits again. This is a seriously delightful song about the challenge of keeping kosher in the southern U.S.: “If you want to keep kosher, you got to work real hard/Because everything here has got a little bit of lard/You make accommodations when you live in the south/Don’t ask too many questions about what goes in your mouth.” Dylan Blackthorne plays accordion on this track, and Mark Hays is on drums. And here we get the tuba, which of course helps make this a highlight of the album. Then “Murder Of Leo Frank” is a compelling folk song that recounts the true tale of Leo Frank, a man who was convicted of the murder of a teenager in Atlanta in the early 1900s. But this song is not about the crime, but rather about the antisemitism that led to his arrest and his eventual lynching. It includes some chilling details, such as Fiddlin’ John Carson’s racist song about Leo Frank, and how the murderers posed for photos with Leo Frank’s body. This is a story I was not familiar with, and Mark Rubin acknowledges at the beginning of the song that many don’t know it, “It’s a tale not known so well.” That’s followed by “Yiddish Banjo Tunes,” which, as its title suggests, is an instrumental track featuring some excellent work on banjo.

“My Resting Place” is based on a poem by Morris Rosenfeld. This one has the sound of a traditional folk and bluegrass number, and is one of my personal favorites. It is the track to feature fellow Bad Livers player Danny Barnes on banjo. “Don’t you look for me where the waters splash/You will not find me there, my love/But where the tears flow free and the teeth they gnash/That will be my resting place.” That’s followed by “Unnatural Disasters,” a fun track written by Si Kahn. It made me burst out laughing the first time I heard Mark Rubin shout out “It’s the Jews!” I was not expecting that. In this crazy time when we have anti-Semites like Marjorie Taylor Greene in positions of power (how the hell did that happen?), this song will provide some much-needed relief. “We caused global warming, and we give you the blues/Wherever we go, we’re always bad news/Whatever goes wrong, it’s always the Jews.”

“Good Shabbes” is a cheerful song about the Jewish day of rest. The lines I most appreciate are “You can put that phone away/It can wait ‘til another day.” That’s followed by “Avinu Malkeinu,” which is the name of a Jewish prayer. There have been other versions of this prayer set to music, by such diverse artists as Barbra Steisand, Lena Måndotter and Phish. Rabbi Neil Blumofe joins Mark Rubin on this track. The album then concludes with “Spin The Dreidel,” performed with the Panorama Jazz Band of New Orleans. This track has a spoken introduction, with a just bit of yodeling. Then it kicks in, and is a whole lot of fun, a party song. Seriously. This one is a cover, but with some additional lyrics written by Mark Rubin.

The Triumph Of Assimilation is scheduled to be released on June 1, 2021.