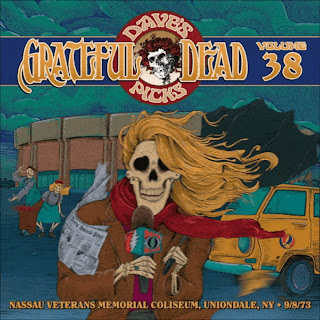 My favorite year for Grateful Dead concert recordings is 1973. No doubt about it, that year featured some delicious, jazzy jams, and nice long shows. The shows had a good flow and energy to them, and Jerry Garcia’s voice was generally at its best. Basically, the band just seemed to find its groove at every show that year. It was a magical time. For Volume 38 in the Dave’s Picks series, Dave Lemieux has chosen one hell of a good show from September of that year. This three-disc set contains the complete show the Grateful Dead played on September 8, 1973 at Nassau Veterans Memorial Coliseum in Uniondale, New York (along with a couple of songs from the previous night at the same venue).

The first disc contains most of the first set, and it kicks off with “Bertha.” Phil Lesh is high in the mix at the start, but soon things are balanced and the band is cooking. We always love a “Bertha” opener, hit the ground running, get the folks on their feet. Jerry’s delivery of “Why don’t you arrest me” is mellower than usual, but no matter. There is a joy to the playing that is obvious. Bob Weir then follows “Bertha” with “Me And My Uncle,” keeping things moving. It’s a slightly messy version, but still fun. We then get an easygoing “Sugaree” with something of a pleasant, relaxed vibe. That, of course, gives Jerry somewhere to go toward the end when things begin to build. It’s not a very long rendition, but gets powerful toward the end. Bob returns to rock and roll with an energetic “Beat It On Down The Line,” and I like it when Keith Godchaux is rocking the keys. That’s followed by “Tennessee Jed,” a song I am always happy to hear. This one too has a somewhat relaxed groove to start, but the band is fully inhabiting that space, everyone on the same page, you know? It’s the kind of version that might not get you rocking, but will certainly have you smiling. And then you suddenly get caught up in that jam near the end, and things are so good.

“Looks Like Rain” begins gently, sweetly, and you get the sense Bob is singing to someone who is resting beside him, his hands running lovingly through her hair. And Jerry’s guitar sounds beautiful. That’s followed by a sweet version of “Brown-Eyed Women.” As they tune after that song, the crowd gets excited, and the band eases into a really nice “Jack Straw,” the harmonies sounding good, and everything working just right. This, for me, is definitely one of the highlights of the first set. Jerry follows that with a beautiful and passionate rendition of “Row Jimmy,” featuring some wonderful vocal work. His guitar is singing at times too. And the band does some interesting, unexpected things with this one toward the end. This is one of the best versions of this song I’ve heard. I just want to drift away on this song, ride it right over the horizon into space. The first disc then concludes with the entire “Weather Report Suite,” the first time ever played live. The first sections have a pretty, gentle, soothing vibe. “We’ll see summer come again.” Oh yes. Then “Let It Grow” has a good deal of energy, and we get some excellent jamming. There is a little bit of “Beer Barrel Polka” tuning just before the disc comes to an end.

The second disc contains the last couple of songs from the first set, and a good chunk of the second set, as well as one song from the night before. It opens with one of my favorites, “Eyes Of The World.” This song never fails to lift my spirits, and versions from 1973 and 1974 are especially good because they contain that extra section in the jam. The crowd is clearly excited to hear it, and that delightful groove is sure to get you dancing wherever you might be listening. I love the way this song flows, like sunlight dancing in a waterfall. This is a really good rendition, with some wonderful work by Bill Kreutzmann on drums, and it leads straight into “China Doll” to wrap up the first set on a mellower note. This version features a moving vocal performance from Jerry, and is quite beautiful.

Bob starts the second set with “Greatest Story Ever Told,” getting things in motion with fiery energy, the guys really rocking this one. Jerry decides to follow that with “Ramble On Rose,” the crowd predictably cheering the line “Just like New York City.” I really like what Bob does on guitar on this version. That’s followed by a hopping version of “Big River.” Folks shout out some requests, and Keith sings lead on “Let Me Sing Your Blues Away,” a fun tune that would be included on Wake Of The Flood a little later in the year. It’s a treat to hear a live version of this song, which goes in some interesting places the studio version doesn’t. This was the first time the Dead ever played this one in concert. They then go into “China Cat Sunflower,” this version having an odd rumbling below at times. It’s not the best “China Cat” I’ve heard, but the jam is really good, and of course it leads into “I Know You Rider.” I love when Phil digs in on bass. That’s followed by a totally enjoyable rendition of “El Paso.”

This three-disc set contains a bit of filler from the previous night, the last two songs of the first set. The second disc ends with the first of those two songs, “Bird Song.” And, yeah, it’s a damn fine rendition, with plenty of good jamming with a jazzy bent.

The third disc contains the rest of the second set, the encore, and one song from the previous night. The disc opens with “He’s Gone,” which at that time had an air of melancholy because Pigpen had died earlier in the year. There is something pretty about this version as it begins, in part because of what Keith is doing on keys. And the lyrics are delivered with tenderness. I love that vocal section near the end. This is an excellent version of “He’s Gone,” and it leads straight into “Truckin’” to get everyone moving (and, yeah, the crowd cheers the mention of New York). They keep the energy cracklin’ during the jam as they push the walls outward. And hey, is it just me, or are there signs of the future “I Need A Miracle” in there? “Not Fade Away” has a great amount of energy, as you’d expect, and the band really jams on it. Nothing spacey, just a great, wild, solid jam, which then eases into “Goin’ Down The Road Feeling Bad.” Oh yes, so good. And they really belt out the lyrics at the end, before going back into “Not Fade Away” to wrap up the second set, with Bob screaming.

The audience was treated to a two-song encore that night. The first is a beautiful, contemplative version of “Stella Blue.” “It seems like all this life/Was just a dream.” The second is “One More Saturday Night” to send everyone out dancing. Was it a Saturday night? You bet it was. The third disc then finishes with the last song of the first set from the previous night, a nice, long “Playing In The Band,” featuring some fantastic jamming. Basically everything you want from “Playing” is here. The jam really cooks for a while, then gets into more spacey territory just before returning to the main body of the song.

Posted by Michael Doherty at 6:43 PM