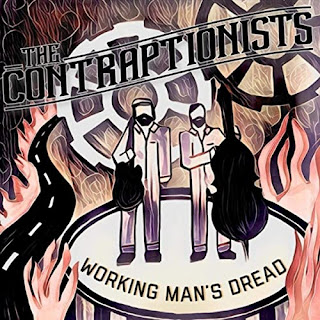 While the title of The Contraptionists’ debut album might remind you of the title of one of the best albums from the Grateful Dead, Working Man’s Dread really has nothing to do with it. Except, I suppose it kind of does, in as much as these songs are narratives about interesting characters and situations, taking place in a mixture of past and present, and employing elements of folk music, mixing it with pop and rock sounds, and straying to darker realms at times. And, like Workingman’s Dead, it is a damn good album. The group is the duo of Paul Givant on vocals, acoustic guitar, electric guitar, banjo, drums and percussion; and Stephen Andrews on upright bass, electric bass, vocals, drums and percussion. You might know both of them from the group Rose’s Pawn Shop. They do get some help on this release from Mike Vizcarra on electric guitar, keyboards and percussion; and from Scott Doherty, Kyle Lalone, and Danielle Bisutti on vocals. The album features all original material, written by Paul Givant.

The album opens with “River Lethe,” and it is this song’s chorus that really grabs me and gets me interested, both its lyrics and the sound, like a strange carnival that is pushing to move forward but is winding down nevertheless. “But all those shadows you disown/Are still with you when you’re alone/River Lethe, River Lethe.” That’s followed by the title track, “Working Man’s Dread.” This one has something of a cheerful sound, while the lyrics give us a different feeling, with lines about struggling financially. I’m guessing a lot of people are going to be able to relate to this song.  Here is a taste of the lyrics: “You’re seven days late on the rent/You’re doing the math in your head/And wake with the working man’s dread/At least you’ve got the weekend to enjoy yourself.” And that depressing line “Hey, baby, don’t worry, someday we’ll win the lottery” is one that people really do say to each other and even believe, wasting what little money they do have on lottery tickets. I wonder if in a few years when this house-buying frenzy comes to an end, the lines about foreclosing on homes will apply to a lot more people. Then “Past The Speed Of Sound” features some intriguing opening lines: “The committee’s back in session/In my head’s a collection/Of lunatics with infinite advice/Got me strapped into a rocket/I’m the drunk kid in the cockpit/Yeah, light it up, yeah let’s roll the dice.” This is an exciting song. I also love the line “As long as I keep moving, it’s hard to tell I’m lost.”

One of my personal favorites on this album is “Flotation Device.” The first time I listened to it, the line that grabbed me was “It’s like the whole world took a bullet train straight to hell.” It has certainly felt like that, eh? But the line that I then cling to, especially upon repeated listening, is “So hold on and float with me.” This is a song about being there for each other during these difficult times, which we desperately need. “You’re my kind of crazy/And with your hand in my hand/We’ll beat this barricade down like a marching band.” That’s followed by “Murky Floor,” which has a kind of dark folk sound, the sound of people doing heavy manual labor, perhaps on a chain gang. “She was a dangerous beauty/Could tempt any man alive/For seven years on the night shift/I must have broke something inside.”

“Empire Of Smoke” is exciting right from the start, with an unusual and intense sound. Then when it kicks in for the chorus, it takes on more of a straightforward sound with a good energy. But it is the song’s darker, more intense sections that I find most compelling, fitting for lines like “It’s alive, my beautiful Frankenstein” and “Just the angels and monsters that we turn ourselves into.” This is another of my favorites. They switch gears with “Mountains,” which has a rather peppy, cheerful vibe and style right from its opening moments, which even feature some hand claps. “I’m climbing mountains made by me” is one hell of a great line. And this track features some wonderful vocal work. But what mainly stays with me is the catchy, fun aspect of this song.

In “Plead,” this duo asks, “Why don’t you want what I want?” Now while this song might be on a more personal level, that is a question that could be asked of entire populations these days. Anyway, I like that work on bass. And Danielle Bisutti joins them on vocals on this track, adding a beautiful layer to this song. Then “Ember Days” establishes a seriously cool sound at the start, then changes gears for the chorus, which bursts with rock energy. That’s followed by “Sight Of Blood,” which features an interesting sound, with a hint of reggae in the rhythm, along with a bit of a gypsy-flavored folk vibe. “I could never stand the sight of blood.” The album concludes with “Dream Song.” Check out these lines: “The patron saint of the crazy sure came through again/We made it out mostly unscathed and still can’t pay the rent.” Living in Los Angeles, I can’t help but enjoy this song, with the lines “Good morning, California/God, I missed ya.” It even touches upon that produce stop near Needles, something I hadn’t been prepared for the first time I drove here. It weirded me out. But, yeah, there are things that make me miss California when I’m gone. After all, as they sing here, “This is home.”

Posted by Michael Doherty at 8:33 PM