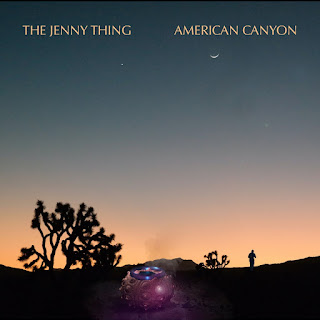 The Jenny Thing is a group that formed in Berkeley thirty years ago when the members were in college. They stayed together for a decade or so, releasing a few albums during that time, then disbanded. Now the group is back together. It is one thing for a band to have all its original members reunite, and it’s quite another for that band to find itself writing and recording music that is at least as good and perhaps even more interesting and exciting than what they did when they first began playing. American Canyon is the first release since the band reformed in that strange and twisted year of 2016, and it features all original material, most of which was written by Matt Easton and Shyam Rao. The band is made up of Ehren Becker on bass, Matt Easton on vocals and keyboards, Mike Phillips on drums, and Shyam Rao on guitar.

The album begins with “Paper Angel,” which has an odd , dreamy start, then breaks open to become a groovy pop song with a certain 1980s vibe at times and some catchy elements. But what I love is that this track creates its own landscape, and pulls you in. Sure, there are electronic elements to that landscape, but it seems that at its heart it is something more human, more emotional. In one moment you might feel the song is caught with someone from the past, yet immediately thereafter you sense a look to the future. And check out these lines: “I can’t tell/What an angel says/My most beautiful friend/You’re so drowning/And so strong/Crushing, calling for me/All that  I want/Is to bore you to pieces again.” That’s followed by “All In My Head,” which creates an interesting mood as it begins. Then that pop beat takes over. For me, this song brings to mind the worries that many of us feel in this dangerous time of gun violence and stupidity. “My heart hides knives/And plans for raids/A strong enough god/That I feel safe.” Will it remain in our heads?

“More All The Time” is one of my personal favorites, in large part because of the lyrics. I find certain lines striking each time I listen to it, like “A drop of water has/The sound of the ocean” and “I’m gonna swim in your sky” and “Mountains fall to themselves.” But perhaps it is the song’s central lines that speak to me the most strongly: “Days are going faster/I love you more all the time.” This is a wonderful and kind of beautiful song. It is followed by the album’s title track, “American Canyon.” There is a certain 1980s vibe to this one, and at times it makes me think of Peter Gabriel, with its heavier pop tone and serious, intense vocal approach. It contains contrasting images, describing destruction and love. “The arches fall around me/Still I am lifted up/When even hope rings empty/Now there is only love.”

“Aeromedica” is an odd one, the lines delivered as spoken word offered like dialogue, as from a film. The entire thing is like some science fiction story, and works as an introduction to “Lightfield” with lines like “Some say when you touch the Lightfield, you die instantly. And then others say that entering the Lightfield has suddenly healed people.”  “Lightfield” is another of my personal favorites, in part because of the presence of acoustic guitar near the beginning, but also because that repeated line “Almost home” is one that I find compelling. The concept of home is one that, I have found, leads musicians to write some of their best material. Try, for example, to find a bad song titled “Home.” Anyway, this song has some excellent lyrics. Check out these lines: “I see you checking out/I wish you’d fight it/Mouth-to-mouth/And mouth to stone/You want to see oblivion/But we’re almost safe/We’re almost home.”

“Monsters Of Mercy” has a strong beat, and also has my favorite title of the album. Here is a taste of the lyrics: “You put laughter in this cake/Oh you’re killing me/To know me was to hate me/But you love me.” The disc then concludes with “Waiting For The Knife,” which, yeah, is another intriguing song title. It creates a captivating atmosphere at the beginning, with a slightly dreamy vibe, as we enter a different realm. At one point, it seems that the song is ending, after the line “I’ve touched the ground,” an interesting line to end on, a successful return. But then the song goes into a cool instrumental section, which seems to take us upward and outward, until we’re at the edge of disintegration, and all is well.

American Canyon is scheduled to be released on June 18, 2021.

Posted by Michael Doherty at 12:20 PM