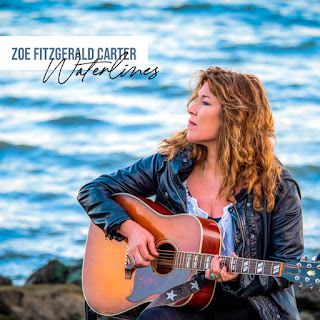 Zoe FitzGerald Carter is a singer and songwriter based in the Berkeley, California.  She is a member of the band Sugartown, and is also a journalist and published author (her book Imperfect Endings was released in 2010). In 2018, she released an album with Sugartown titled Waiting For The Earthquake, which featured a lot of her own material as well as interesting renditions of “This Land Is Your Land” and “I’m Gonna Be A Wheel Someday.” Now she has followed that up with Waterlines, which is officially her debut solo full-length album. This one contains all original material. The music largely fits in the folk realm, but Zoe FitzGerald Carter certainly does not feel restricted by that term, employing elements of jazz, Latin music and rock as she crafts beautiful, emotionally engaging songs. And though it is a solo album, she is joined by her three fellow Sugartown band mates, Brian Bloom on acoustic guitar, David Boyden on violin, and Dan Seamans on standup bass. Also joining her on this release are Dawn Richardson on drums and percussion, Paul Olguin on electric bass, Julie Wolf on keys and accordion, Erik Jekabson on trumpet and flugelhorn, Michael Papenburg on guitar, Pam DeGado on backing vocals and percussion, Mark Shapiro on harmonica, and J. Wood on guitar and strings.

Zoe FitzGerald Carter opens the album with “Better Things To Do,” a song that has me from its first line, “Everything I know, well, I learned it at the movies.” Hers is a voice that has both warmth and experience. There is also a wonderfully sad sort of humor in her delivery, as with its second line, “Everything you taught me I could have read online.” This is a strong opening track featuring some good lyrics. It is a song of longing, but one in which she ultimately gains control of her feelings and desires, as the line changes from “you’ve got better things to do” to “I’ve got better things to do” at the end. That’s followed by “Below The Waterline,” which opens gently, her voice supported by guitar. It is a pretty song with a nostalgic vibe, looking back at summer travels through Europe and the person she shared intimate moments with there. There is a fondness to the memories, even on lines like “I never seemed to know exactly who I was when I walked into your room/Were you making love to me or some stranger you knew.” The instrumental section in the second half is beautiful and moving. This song leads us to wonder where she is now, physically and emotionally, how the past changed her, and what she wants from these memories. It’s an excellent song.

“Only Girl” also looks back, this time to her teenage years, and to her best friend of the time. Certain lines stand out for me, particularly “You were much too young, but he smiled, pulled you to him, I looked away and you were gone.” What might have been exciting at that time now seems more dangerous than exciting. Maybe that’s because I’m well beyond my teenage years, or because the world has changed a lot, but that innocence sadly seems a thing of the past. This song brings the story to the present, and they are no longer close. So sad, that line “I heard you moved to Richmond.” Nothing against Richmond, but it is sad when that is what becomes of a friendship, when something important is reduced to rumor and memory. In “Owl In Kensington,” Zoe FitzGerald Carter’s voice feels like an old friend.  Everyone in the Los Angeles area can relate to these lines: “I was driving in Los Angeles, a cooler and a suitcase in the back seat of my car/Somewhere a fire was burning, smoke filling the sky above me/The sun turned red.” It is interesting how some details come as almost matter-of-fact, like the plane crash. I love that work on accordion.

“On The Raft” begins with percussion like a heartbeat, and soon establishes a somber vibe. There is a compelling, dark beauty here, but interestingly it is that instrumental section that really grabs hold of me. That’s followed by “These Words,” which has a cool, jazzy vibe, this track featuring some excellent work by Erik Jekabson on trumpet. “You slept on a beach one night, woke up to the stars/Someone stole your passport, someone else stole your heart/These words, these words.” “Like A Drum” also has a cool full-band sound, and includes more good work by Erik Jekabson. And check out this track’s opening lines: “What we really want is to move the stars to pity/But we’re beating a big drum for the bears to dance.” (And yes, I can’t help but think for a moment of “Waltzing With Bears.”)  I love that violin work at the end, as if that instrument wishes to continue the tale. “Saturday Man” is another jazzy number, this one having a sweet summer vibe, coming at us like a nice warm breeze. This track features more great work from Erik Jekabson. “You didn’t need to bring me roses/We’re past the point of striking poses.”

“One Too Many Days In Nashville” is a song about pursuing a career as a musician. At one point, this song reminds me of The Lovin’ Spoonful’s “Nashville Cats,” when she sings, “There’s a hundred picking, writing, singing girls like me in Nashville.” She follows that with the line, “Only some of us got the sense to know it’s time to go home.” This track features good work on violin.  The album concludes with “I Wanna Be A Teenage Boy,” which was co-written by Hindy Bare. This is a playful, yet serious song about gender roles and what is still expected of women, and excused in men. I can’t help but laugh out loud at certain lines, such as “You’re getting fat, what’s your explanation,” “The secret is Brazilian waxing,” and of course “I wanna be a teenage boy, crank it up, grab my balls, bang my head against the wall.” And there is some guitar work from the boy’s rock realm. This song also has a powerful closing line.

Posted by Michael Doherty at 12:56 PM