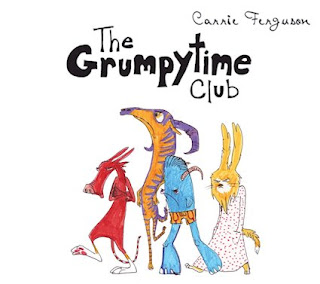 Who among us has not joined The Grumpytime Club at some point in the last year or so? The pandemic has affected all of us, adults and children alike, but singer and songwriter Carrie Ferguson offers some music to take us to a more cheerful place on her new children’s album The Grumpytime Club. This album features original material, written or co-written by Carrie Ferguson. In addition to providing the lead vocals, she plays melodica, piano, accordion and ukulele. She is joined by Garrett Sawyer on organ, bass, guitar, cuatro, banjo, percussion and backing vocals. In addition, there are several guest musicians on various tracks. Though this is a children’s album, it is not an album that is just for children. This music should appeal to folks of all ages, for though it contains some important messages for children, those messages are not delivered in a heavy-handed or condescending way. Rather there is a great sense of play here. Positive vibes abound, which we all are in need of.  And besides, adults could use reminders of these messages and ideas too.

The album opens with “Cat And Piggy,” which has a gentle and sweet bluegrass sound. This is a song that offers some good advice from different animals, and to other animals (and to any humans who might happen to be listening). “And if you get to the river, and the bridge is down/Or you come to a mountain and there’s no way around/You’ve got to find a new way to figure it out/That’s what it’s all about.” And like many bluegrass songs, there are some good instrumental sections. Jim Henry joins Carrie Ferguson on mandolin on this track, and Peter Siegel plays arch top guitar. J.J. O’Connell is on drums and percussion. “Cat And Piggy” is followed by “The Puppy Song (You And I).” This is the song that got me interested in this album. Its chorus is deliriously and wonderfully insane, and is guaranteed to make you smile. And if you sing along loudly enough, there is a decent chance you’ll be carted away. Here are the lyrics: “Puppy, puppy, puppy, puppy, puppy, puppy, puppy, puppy, puppy, puppy, puppy, puppy/Doggy, doggy, doggy, doggy.” My girlfriend already got a little tired of me singing it to her, but maybe that was because she was at work. Anyway, somewhere in the middle there is a break, with the sound of someone snoring, though, again, if you sing this loudly enough, no one will be able to sleep for blocks and blocks. Jim Armenti plays clarinet, and Samara Sawyer plays trombone on this delightful track. And Carrie Ferguson gets a lot of help on vocals. Then “Mishy Mashy Mushy Mooshy Moo” is another wonderfully goofy and adorable song, this one featuring Samara Sawyer on trombone, and Sarah Fischer on trumpet.

On the album’s title track, “The Grumpytime Club,” Carry Ferguson sings “At The Grumpytime Club, we use grumpy voices/Play grumpy games and make grumpy choices/And nobody tells us to lower our voices/Down at the Grumpytime Club.” I can’t help but totally love this song. And it might surprise you to learn that “It’s the most relaxing place in town/Down at The Grumpytime Club.” It’s about being able to feel negative, without feeling bad about feeling bad, you know?  You’re among friends, so it’s okay, and they’re ready with a hug if you need it. I particularly like these lines: “If you’re feeling cranky, or angry and mean/Stressed and depressed, somewhere in between/There’s somewhere you should be seen/It’s down at The Grumpytime Club/Feeling resentful, defensive and mad/Kinda shut down, a little bit sad.” There is some really nice work on guitar in the second half. That’s followed by one of the absolute strongest songs on the album, “Tavi’s Song,” for which Carrie Ferguson won First Place in the 2020 New England Songwriting Competition. It’s a beautiful and cool number, and features some excellent work by Garrett Sawyer on cuatro and guitar. I also like that work on accordion.  The overall sound of this song is incredibly appealing. “And somewhere in the darkness/Comes a song that’s just for you/Go sliding down a moonbeam/Through the window to your bed/Your father will sing you to sleep/Your mother strokes your head.”

“The Best Way To Be” carries a good message. “And I’m not afraid to be me/Because I’m the only one that I know how to be/And it’s plain to see/That the best way to be is to just be me.” And then in the second half we get some nice touches on trombone. Carrie Ferguson then delivers a rock and roll song, “Do It Again.” And, yeah, it’s fun. Here she gets some help from Amelia Sawyer, Samara Sawyer and Ajika Sawyer on vocals. The blending of their voices sounds great. The fun continues with “Up And Down,” which has a delicious New Orleans vibe, featuring a great horn section that includes tuba. Also, Garrett Sawyer plays banjo on this one. It’s a song in which parents try to coax their children to sleep, presenting a sort of conversation between parents and the children, who are not quite ready for bed. And to prove they aren’t ready, there is even a short drum solo near the end. The parents eventually win, and they too fall asleep, as we hear them snoring at the end (wait, is this the second song to feature snoring?). Joe Fitzpatrick is on drums and percussion, Nick Borges is on trumpet, Kat Rapacki is on trombone, William Choe is on tuba, and Jeff Fennell is on clarinet.

“Lend Me Your Glasses” is a pretty song about understanding different points of view, and letting each voice be heard. “We’ll try to see/All the points of view/Before we choose/What we want to do.” Normally, I would consider this a good message; however, these days there are people whose points of view should only be ridiculed or ignored, and not considered (looking at you, Marjorie Taylor Greene). That’s followed by another pretty song, “Aza’s Song,” with a vocal performance that is gentle and soothing and loving. “We remember when you were just a dream/We were waiting to welcome you here.” The album then concludes with “Hope Parade,” featuring more wonderful vocal work.

The Grumpytime Club is scheduled to be released on June 11, 2021.

Posted by Michael Doherty at 11:31 AM