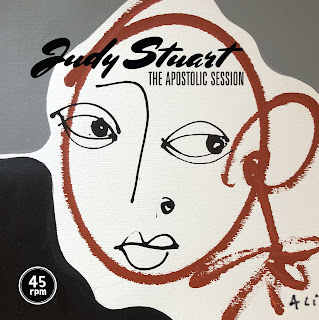 Judy Stuart recorded the two tracks on the new ten-inch record The Apostolic Session back in 1969, but they were left unreleased until now. There isn’t a whole lot of information on the artist, and sadly she died before the record was released, so we don’t get to hear her thoughts and memories regarding these tracks. However, a little biographical information is contained in the record’s liner notes, including the fact that she had a pet monkey named Alfie and the two of them threw some wild parties. She also wrote music for several plays, and did appear on some other recordings. The good news is that there are plans for the release of those recordings, so people will get a chance to hear more from this unusual and exciting vocalist. The musicians who back Judy Stuart on this release are Shelly Rusten on drums, Paul Nash on electric guitar, Monty Renov on bass, Burton Greene on piano, Tom Moore on flute, Calo Scott on cello, and Marc Levin on cornet and valve trombone. Steve Tintweiss is the music director and conductor on this record, and also provides some vocal work.

“Inspiration” begins with a good beat, and soon becomes a rather wild ride, taking place in a thrilling land where the jazz, rock and folk realms intersect, where someone like Frank Zappa holds court. Yeah, it gets chaotic at times, but that is certainly part of its appeal. It is like letting your imagination run free, and somehow ending up with a recording of the results. “Standing on the banks of inspiration,” Judy sings, but it feels like we are surrounded by inspiration, immersed in a free-form celebration of inspiration. And at times, the musicians settle for a moment, as if to collect themselves or their thoughts, and we are back to just the drum beat. But soon things build again from there, and I love those moments when the funky bass line joins the drums just before things grow to delirious peaks. There is a sense of joy in not having to hold back. That great abandon is so appealing, so engaging, particularly right now, when I suspect so many of us want to scream, to let loose, to thrash about. And when Judy shouts “Inspiration,” it is a voice that seems both unfettered and commanding. The track concludes as it began, with that beat.

The record’s flip side is “Nickel Bag Of Tears,” which was co-written by Judy Stuart and Dave Tamber. It has more of steady groove, established right at the start, yet still has that unbridled feeling of excitement. And Judy Stuart’s vocal performance has a good deal of delicious energy. While there might seem a stronger sense of form to this song, the musicians do get a chance to jam, and this track features some excellent work on guitar in particular. And I love the way the horn rises above rest at moments.  This track winds down as it reaches its conclusion, which is actually as surprising as everything else about this wonderful recording.

The Apostolic Session was released on December 15, 2020 through Inky Dot Media.

Posted by Michael Doherty at 10:34 AM