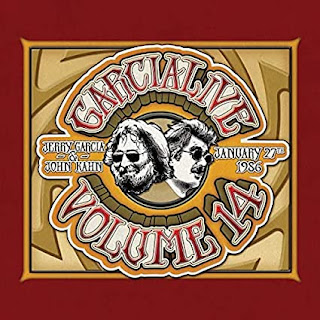 After the horrible year of 2020 finally came to a close, I decided to start 2021 off right, with some Jerry Garcia live recordings. My parents helped me catch up on the Garcia Live series by sending me volumes 13, 14 and 15 for Christmas. Garcia Live Volume 14 contains the complete show that Jerry Garcia and John Kahn performed at The Ritz in New York on January 27, 1986. Yes, it’s one of those acoustic duo shows. Unlike other releases in this series, it is just one disc. That’s right, both sets fit on a single disc. That is a short show. But the music is hitting me just exactly right, and putting me in an optimistic mood for the new year.

The first set opens with “Deep Elem Blues,” which might start a little awkwardly, but no matter. It is so good to hear Jerry Garcia play acoustic guitar. This is a song that the Grateful Dead played too, including it on their 1981 live acoustic album, Reckoning. This version obviously has an even more stripped down, raw and immediate sound. It must have been something to see Jerry in that context. As a side note, when I was in my teens I had a poster which featured artistic renderings of a hundred Grateful Dead songs, and whoever designed it must have misheard this song, for the sign on the poster reads “Debellum,” not “Deep Elem.” Anyway, I love this song, and Jerry digs into it. He and John follow that with a cool rendition of the folk song “Little Sadie,” and here Jerry’s voice sounds fantastic. Plus, he delivers some really nice stuff on guitar. This is certainly a highlight of the first set, and it is followed by “Friend Of The Devil.” And though it is an acoustic setting, Jerry does the slower version here, his vocals having a gentle, relaxed quality, which works so well. Elizabeth Cotten’s “Oh Babe, It Ain’t No Lie” is another song that the Grateful Dead included on Reckoning (though for some reason it was left off of the first CD issue of that album). This track is reason enough to own this disc, with John Kahn getting loose at moments, and Jerry’s voice sounding perfect. That’s followed by a cover of Bob Dylan’s “When I Paint My Masterpiece.” When the Dead would play this one, it was Bob Weir who sang lead, and he always did a great job with it, but it’s so good to hear Jerry tackle it here. And he is clearly into it. The energy is there right from the start, and the crowd reacts to that. “Someday everything’s gonna be sweet like a rhapsody/When I paint my masterpiece.” The first set then concludes with “Run For The Roses,” probably the most interesting choice for an acoustic show. But it works. And it works following “Masterpiece,” the energy remaining high.

Jerry Garcia and John Kahn open the second set with “Dire Wolf,” a song from Workingman’s Dead, which was re-issued last year in a special 50th Anniversary Deluxe Edition.  It is one of many Grateful Dead songs to deal with death, this one handling it straight-on, with Jerry singing “Please don’t murder me.” Another side note, when Jerry Garcia received death threats (because that is the kind of world we live in), the Dead played this song. Anyway, Jerry and John deliver a pretty good rendition here, and follow it with Dylan’s “Simple Twist Of Fate.” It seems that the slower songs spoke most strongly to Jerry on this night, for this is another of the disc’s highlights, with Jerry giving a moving, passionate vocal performance. There are moments here when the way he delivers a phrase or even a single word has me holding my breath and nearly tearing up. And his guitar work speaks just as passionately on this song. And then John Kahn gets a chance to shine on bass. “Spike Driver Blues,” a folk blues song by Mississippi John Hurt, also features a really good, soulful vocal performance from Jerry. Then “Bird Song” gets the crowd excited, and interestingly this version is kind of fast, delivered with some power, a driving energy. Jerry and John jam on this one. The second set concludes with my all-time favorite song, “Ripple.” Judging by the audience’s reaction when they start it, I am far from alone in my love for this song. And this is a sweet rendition (though honestly, I’ve never heard a version that has failed to affect me). “Let there be songs to fill the air.”

The audience wants an encore, and gets one. Jerry Garcia and John Kahn finish the evening with a cheerful, spirited rendition of “Goodnight Irene.” What a great finish to this show. “I’ll see you in my dreams.”

Posted by Michael Doherty at 5:53 PM