The demented sociopath has finally been removed from the White House, but his cult of racist imbeciles continues to pose a threat to the country. While we as a nation try to move forward to a calmer, more sane and intelligent place, it’s great to have some good music to help us get there. During the pandemic and throughout these troubling times, musicians have been putting out some excellent albums. Here are some notes on a few new jazz releases (well, one of them isn’t quite as new as the others) you might be interested in. 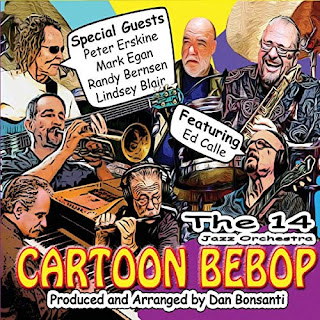 The 14 Jazz Orchestra: “Cartoon Bebop” – The 14 Jazz Orchestra is a big band under the direction of arranger Dan Bosanti. Including Bosanti, there are fourteen members, so there you have it. However, on the group’s new album, Cartoon Bebop, there are also several guests. That is in part because the album was recorded during the pandemic, and some members of the band were not set up to record at home, and so other folks had to sit in for them. The album opens with its title track, “Cartoon Bebop,” an original composition by Dan Bosanti (one of two on this release). As you might guess from its title, this track has a playful quality. It is a lively number, and while listening, you can imagine your own animated film taking place all around you. Jason Cardner’s work on trumpet stands out here. That’s followed by “Misturada,” written by Airto Moreira, a percussionist I learned about through his work with Mickey Hart. This track of course features some good and prominent percussion, including some excellent work by Lee Levin, and I love what Kemuel Roig does on keys. Then check out saxophonist Ed Calle’s delicious lead on “Dayride.” This album includes two compositions by Chick Corea, “Got A Match?” and “Duende,” both from LPs released in the 1980s. “Got A Match?” is a wild ride, featuring some phenomenal work by El Calle on tenor saxophone, by Ed Maina on piccolo, and by Nicky Orta on bass. “Duende” is a mellower tune that has something of a theatrical vibe, feeling like it tells a story populated by some interesting characters. The album concludes with its second original number, a fun track titled “A Day Tripper’s Blues Buffet.” Though it is an original composition by Dan Bosanti, it is large part an adaptation of The Beatles song. This track features more excellent work on saxophone by Ed Calle, and a really good lead on guitar by Lindsey Blair. This album was released on January 15, 2021. 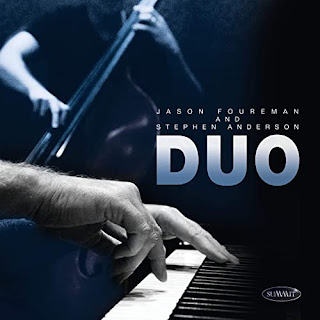 Jason Foureman And Stephen Anderson: “Duo” – This recent album from bassist Jason Foureman and pianist Stephen Anderson features mostly covers from a fairly diverse group of writers, along with a couple of original numbers composed by Foureman. The album opens with “Falling Grace,” a piece written by Steve Swallow. This rendition has a gentle, introspective vibe at the start, and then builds from there to feature some exciting and vibrant work on piano. There is also a lively, pulsing lead on bass in the second half. That’s followed by a cover of saxophonist Phil Woods’ “Reet’s Neet” which has a good energy right from its opening, and a jubilant feel throughout, helping to make this one of my personal favorites.  There is a whole lot of impressive work on this track, and enough energy to power a small city. We then get the first original composition of the album, Jason Foureman’s “Through And Through,” which has a sweeter, more relaxed sound, working to ease our minds a bit. They then turn romantic with a wonderful and dynamic rendition of Helmy Kresa’s “That’s My Desire,” another of the disc’s highlights. And speaking of romance, the duo also covers Ray Noble’s “The Touch Of Your Lips,” giving it a gorgeous late-night vibe, and then “To Each His Own,” this version popping and moving. Though the most emotionally engaging track on this release is the duo’s excellent rendition of “I’ll Close My Eyes.” The album concludes with its other original composition, “Ultra Blues,” a cool and spirited number. This album was released on June 12, 2020.

Doug MacDonald Duo: “Toluca Lake Jazz” – Guitarist Doug MacDonald and bassist Harvey Newmark present some delicious renditions of standards as well as some original material composed by MacDonald. The disc opens with a cool, swinging rendition of “Flamingo,” a tune written by Edmund Anderson and Ted Grouya, and recorded by Duke Ellington. I love the way this track moves; there is a joy to their playing, and a natural flow. They then get into a bossa nova style with “My Little Boat.” They take “Baubles, Bangles, And Beads” from the musical Kismet and make it move as well, picking up the pace. The track features some excellent and exciting work from both musicians. Another highlight of the cover material is the duo’s rendition of “If I Had You,” which swings and grooves with something approaching glee. The first of the original compositions on this album is its title track, “Toluca Lake Jazz.” Both musicians are based in southern California, and Toluca Lake is a nice, but rather expensive section of Los Angeles. I used to see jazz there occasionally at a cool club on Riverside Drive, Money Tree (which then became Lucy’s 51, and now is something else). Money Tree is gone, but this track is bringing to mind some excellent evenings I spent there soon after moving to Los Angeles. There is a great sense of fun about this one, a relaxed kind of fun. “Is This It?” echoes a question many of us find ourselves asking. Another original composition, this short track finds Doug MacDonald working alone. That’s followed by “Desert Jazz,” with MacDonald and Newmark playing the opening and closing sections together. The duo dips into the blues with “De-Ha,” another cool and totally enjoyable original track. I particularly love that bass work. The disc closes with another original number, “New World,” featuring some fantastic play between the two musicians. This album is scheduled to be released on February 5, 2021. 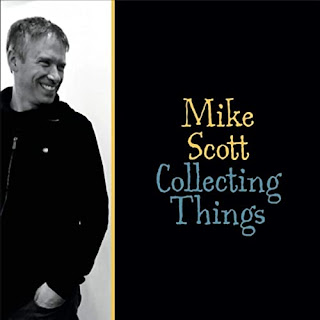 Mike Scott: “Collecting Things” – The new album from guitarist Mike Scott, founding member of the Los Angeles Jazz Collective, features almost all original material. It begins with a solo guitar piece, “Sol Minor Prelude,” which very quickly draws us in with its beauty and strong emotional core. The band then joins him on “Sol Minor.” The band is made up of Joe Bagg on piano and organ, Darek Oles on bass, and Jake Reed on drums. “Sol Minor” is an interesting piece, with some catchy elements, as well as places to breathe, and it features some excellent leads on guitar and piano. That’s followed by “Now And Later,” one of my personal favorites, in part because of that striking work on bass. This track creates an unusual space, with a sort of funky vibe. Mike Scott then gets into the blues with “Jack’s Dilemma,” a track that begins with some solo guitar playing and features some cool work on organ. “Boom Diddle It” swings, and features some fantastic work on drums, as well as a good lead on bass, and of course some excellent guitar playing, but it is that piano lead in the second half that I love most. This is one of my personal favorites from the album. The album’s sole cover is “On A Clear Day,” which has a good groove and a somewhat laid-back feel to the guitar work. That’s followed by “Dark Bossa,” which has a pretty and rather haunting sound. I love the way the guitar and piano interact, creating a compelling world. “Rondo” is a dramatic number that makes me want to take dance lessons. Then “Coda” has a kind of easygoing vibe. The disc wraps up with “49,” composed on Mike Scott’s forty-ninth birthday. It has a strong, steady beat, and some thoughtful guitar work. Well, that is an age to give anyone pause, isn’t it? This album was released on January 22, 2021. 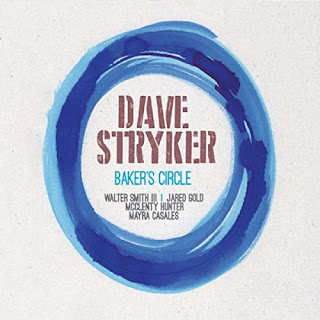 Dave Stryker: “Baker’s Circle” – On Dave Stryker’s new album, the guitarist is joined by Walter Smith III on tenor saxophone, Jared Gold on organ, and McClenty Hunter on drums, with Mayra Casales on percussion on a few tracks. The music here is a mix of original material and covers, and the album begins with three originals written by Dave Stryker. The first is “Tough,” which moves at a great pace and features a delicious lead on guitar that both pops and flows. Jared Gold’s lead on organ takes the track to a wilder space, with an intense and exciting vibe. Then “El Camino” has a Latin groove, with Mayra Casales sitting in on percussion, and features some colorful and vivid work by Walter Smith III on sax. “Dreamsong” has more of a bluesy vibe, and yet seems to stroll into the room, aware of its own cool power. And that lead on organ is particularly interesting. The final composition by Dave Stryker is the album’s title track, which has a somewhat relaxed vibe, and includes some good work on guitar. There is also a piece written by Jared Gold, “Rush Hour,” which begins with a somewhat frantic, busy sense, and features some exciting work, particularly by Walter Smith on saxophone. I also really like McClenty Hunter’s drum solo. As for the covers, this album includes a good rendition of Cole Porter’s “Everything I Love” that features some excellent guitar work, and an easygoing version of “Superstar,” written by Leon Russell, Bonnie Bramlett and Delaney Bramlett, and most famously recorded by The Carpenters. The group gets kind of funky with a cover of Marvin Gaye’s “Inner City Blues,” featuring Mayra Casales on percussion. That’s followed by the sweet and mellow “Love Dance,” and then “Trouble (No. 2),” which is a fun, groovy number that features more great work on guitar. This album is scheduled to be released on March 5, 2021.
Posted by Michael Doherty at 12:33 PM