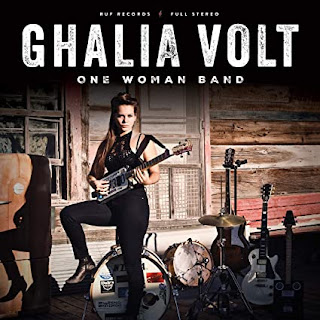 The pandemic has basically shut down live music, and has kept friends and family apart for ten months now. Getting together with anyone outside your household presents a very real danger. But that certainly isn’t keeping Ghalia Vauthier (now going by the name Ghalia Volt) from producing some fun, lively music. One Woman Band is exactly what its title promises. Ghalia, in addition to providing the vocals, plays guitar, slide and drums on this release. She also wrote most of the material. Yes, she has two guests joining her on a few tracks, but she is a one woman band, and a musical force on her own. I was turned onto her music a few years ago when she released Let The Demons Out, an album that had me hooked within seconds. Her style of blues is raw and sexy and powerful, and this new release once again demonstrates her talent.

The album opens with “Last Minute Packer,” and immediately the great raw drive of the music strikes us. It is also gloriously loud, and that is the case no matter what volume you set your stereo on. It’s like your stereo will refuse to diminish the song’s inherent power. I’m into the feel of the music, and so it is a moment before I realize what Ghalia is even singing about. The song is about someone who is traveling from hotel to hotel, about getting up and packing. You get the sense it’s about a musician, but I don’t think that’s ever explicitly stated, and you could imagine a different sort of occupation, particularly as she sings “A one night stay, Wap Bam Boom.” Yeah, the drumming is rudimentary, but that’s all that’s called for here, and it works. “Pressure/Gives me pleasure/Yeah, I like to be under the gun/When packing is more fun.” I tend to pack at the last minute too, though that gives me anxiety, not pleasure, and I tend to forget at least one thing every time. This one was written by Ghalia Vauthier and Dean Zucchero. It is followed by “Espìritu Papàgo,” one of the tracks to feature a guest. Dean Zucchero plays bass on this track. But it is Ghalia’s vocal performance that really stands out on this track. There is something strangely seductive about it, like she is luring us out into the desert. To do what, we can only speculate. But we can’t fight the urge to join her. “My old Chevy broke down, and there’s nobody around/I wish there was a way to be found.”

In “Can’t Escape,” Ghalia sings “Can’t escape, can’t escape, can’t escape/From my mind.” Oh yes, that is trouble many of us share these days. Whose mind isn’t a whirlpool of anxiety, frustration, anger and despair?  We all at times wish we could shut off our brains so that we could relax. “I want to stop being my brain’s slave/Or you’ll find me in the grave.” Mike Welch joins Ghalia on guitar on “Evil Thoughts,” a groovy, cool, and catchy number. In this one, she sings “Loneliness, loneliness/I’m tired of feeling down and out.” Have any other two lines so perfectly expressed what we have been feeling this past year? And who hasn’t been plagued with evil thoughts? That’s followed by “Meet Me In My Dreams.” Dreams are one of the only places where it is safe to meet someone these days. This song, however, is not about dealing with the pandemic or with a world filled with violent racists, but about trying to exist after the death of a loved one. This song features some strong lyrics. Check out these lines, which open the track: “Old sweet love gone too soon/Reached out to the moon/Became another star in the sky/Standing way up high.” There is a great ache in her voice at times as she delivers this song, a song that digs and claws its way into your heart.

“Reap What You Sow” comes on strong, and has a classic blues vibe, as well as another really good vocal performance. Check out the way she delivers the lines “I’m heading down south, baby/Gonna have to let you go” and “Then here’s the house key” for examples. Then “Loving Me Is A Full Time Job” begins as a cool, slow blues number in which she makes her demands, and we acquiesce to them all, without question. “I want a morning kiss on my cheek/I want you by my side/When the sun hits the tide/And I want you around/When the sun goes down.” It soon kicks in to become a fun number, with the pace picking up considerably. That’s followed by one of only two covers on this album, “It Hurts Me Too.” Here she supports her voice with guitar, no drums, giving the song a rawer, more immediate sound. She changes one word, which does mess up the rhyme and alters the sense of the song. She sings “When things go wrong, go wrong with him/It hurts me too.” It seems unnecessary to change the line, but it’s still a good version.

“It Ain’t Bad” is a fun, playful tune. She is clearly having a good time with this one, and I’m having a good time listening to it, particularly the chorus, which is: “It ain’t good/It ain’t bad/And if it ain’t bad/That’s pretty good.” I also appreciate the lines “‘Cause who knows what tomorrow brings/So let’s live at full swing.” That’s followed by “Bad Apple,” a song about a son who is turning out to be a shit like his father. I can’t help but think of Donald Trump Jr. when listening to this one, but of course it makes sense to think of Donald Trump himself too, as his father was also racist scum. Three generations of assholes in that family. This song also touches on the gun issue. There are so many important, even crucial areas that need to be addressed by the Biden administration, one of them being serious gun control legislation. With many urgent issues facing us, this one might be put on the back burner, but shouldn’t be. In this song, Ghalia sings, “Billy’s favorite toy is a gun/Daddy taught him how to hit and run.” That guitar work in the second half commands your attention. The album concludes with its other cover, “Just One More Time,” which was written by Ralph Bass and Ike Turner, and recorded by Billy Gayles with Ike Turner’s Kings Of Rhythm. On this track, Mike Welch plays guitar, and Dean Zucchero is on bass. There is something delightful in the way Ghalia delivers this one, and I love that guitar work. This is a wonderful way to wrap up the album.

One Woman Band is scheduled to be released on January 29, 2021 on Ruf Records.

Posted by Michael Doherty at 2:02 PM