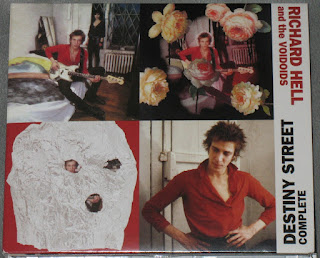 Richard Hell And The Voidoids released two studio albums back in the day – 1977’s Blank Generation and 1982’s Destiny Street. Richard Hell (Richard Meyers), who was also a member of Television and Johnny Thunders And The Heartbreakers, was apparently never really satisfied with that original release of Destiny Street, and in 2009 released a different version of the album, called Destiny Street Repaired, with new vocals and guitar parts. That too did not quite meet his expectations or desires for this particular album, so when most of the original masters were found, Richard Hell went back to work on them, and we now have, as a result, Destiny Street Remixed. All three versions are included in the new two-disc set Destiny Street Complete, along with a bunch of demos and a booklet of liner notes. At the beginning of that booklet, Richard Hell writes: “I have to smile and roll my eyes when I think of this, this package, but I was determined to do it. Nobody made me, or even asked me. I take full responsibility for it. Three plus versions of the same album. It’s ridiculous, but I’m glad.” I’m glad too. And anyone who is a fan of punk music will likely share that feeling.

The first disc contains the original album and Destiny Street Repaired. The songs on both versions are in the same order. The album opens with “The Kid With The Replaceable Head,” an odd and totally enjoyable song that is somewhere between punk and pop, a song you can dance to even if you don’t pay attention to the lyrics. But if you do pay attention to the lyrics, you’ll enjoy it all the more. Check out these lines: “(Look out!)They say he's dead, he's my three best friends/(Look out!) He's so honest that the dishonest dread/Meeting the kid with the replaceable head.” What does it mean? I can’t say for sure. But it’s refreshing listening to something this goofy and fun, especially as it provides a needed escape from the present troubles. The version from Destiny Street Repaired might be clearer, but I’m not sure if it’s better. It features additional guitar work by Marc Ribot. That’s followed by the first of three covers on the album, The Kinks’ “I Gotta Move,” a song that was originally included on the All Day And All Of The Night EP. Richard Hell And The Voidoids do a good job with it, mixing that cool garage sound with punk, and this features some excellent rock and roll guitar work. The second cover is Bob Dylan’s “Going Going Gone,” a song from his Planet Waves album. This is a slower tune, and I like the way these guys approach it. “I don’t really care what happens next/I’m going, I’m going, I’m gone.” Bill Frisell plays guitar on the Destiny Street Repaired version.

“Lowest Common Dominator” is of course a song title that I completely love, a play on “lowest common denominator,” an expression I have found myself using more and more. During the 2016 election, it seemed to be in the air, right? But “Lowest common dominator” would have also been completely apt during that election, and since then. This is a fun song, as you’d probably guess, with a delicious beat. I love that bass line. And when it opens, it feels like a punk version of The Monkees’ “(I’m Not Your) Steppin’ Stone.” What I love about the version from Destiny Street Repaired is the backing vocal work by Ruby Meyers-McEnroe and Sheelagh Bevan. There is a very playful vibe about it, and because of it, I prefer this version. “Lowest Common Dominator” is followed by “Downtown At Dawn,” one of my personal favorites. I recommend listening to it with headphones, for there are lots of little touches and elements that kind of surround you, creating a fuller landscape. It’s sort of a pop song, and these guys kind of jam on it too. It’s nearly six minutes, pretty long for a punk record, but it never drags, never feels repetitive, and it’s over before you know it. And again, Richard Hell writes some unusual lyrics, such as these lines: “By indolence and insolence, the lovers realize/Yeah, only dropout dancehall offers love so undisguised/That you just get all de-civilized/And coalesce, you feel your best, and think about it less and less.”  The version on Destiny Street Repaired is actually like a minute and a half shorter. I prefer the original, longer version.

In the liner notes, Richard Hell includes some brief thoughts on each of the album’s tracks, and about “Time” he writes, “I was hoping Linda Ronstadt would pick it up.” That made me laugh out loud when I read it. But, you know, I thought about it for a moment, and she could totally have done this song justice. She would have nailed it. It’s another of the album’s best songs. Bill Frisell plays guitar on the Destiny Street Repaired version. “Time” is followed by “I Can Only Give You Everything,” the third and final cover of the album, this one originally recorded by Them. This is another cool song, and Richard Hell’s rendition retains a lot of that great garage rock sound. Plus, it has one of my favorite vocal performances of the album. I even love the way it falls apart at the end. Marc Ribot adds some guitar work to the version on Destiny Street Repaired. Then “Ignore That Door” comes on strong with a heavy pulse and a scream that get this one pumping and moving along. “And the only human warmth comes/From decomposing whores.” The scream at the beginning is dropped from the Destiny Street Repaired version. Ivan Julian adds some guitar work to this version.

There is a guitar intro to “Staring In Her Eyes,” and then the song kicks in with a good beat. There is something oddly sweet, even pretty, about this song. “No one could stand feeling that way for long/So I, I chose to regard all the world as the wrong/And to, and to make my own long assertions in song/I decided I just didn't care/That I'd look and I could see nothing there.” Plus, this song includes the line “And stare like a corpse in each’s eyes.” The guitar intro has a slightly different vibe in the version on Destiny Street Repaired, and the line “I chose to regard all the world as the wrong” becomes “I chose to regard the whole world as the wrong.” The final song of the album is its title track, “Destiny Street,” which has a certain funky flavor. The lyrics are delivered sort of as spoken word, which works well with the story he’s telling us. This is another of my favorite tracks. “Yes, I seduced myself/I took me home.” On Destiny Street Repaired, Richard Hell still presents the lyrics as spoken work. It’s interesting, the way those opening lines about age feel different as delivered in this version. This track is significantly longer than the original version, two and a half minutes longer, becoming a jam with lots of interesting guitar work toward the end.

The second disc contains the new remixed version of the album.  Before Destiny Street Repaired, Richard had wanted to remix the album, but discovered that the company had misplaced the original masters. But in 2019, those masters were found. Well, three of the four original tapes were found, anyway. And so Richard went back to work on the album, remixing it from those tapes. So this version of the album contains the original guitarists again, at least for the most part. For the three tracks contained on the one tape still missing, he used the Destiny Street Repaired versions, remixing those. Those songs are “Lowest Common Dominator” (so this version has those great backing vocals), “Downtown At Dawn” and “Staring In Her Eyes.” Anyway, the album sounds fantastic. Mission accomplished.

In addition to the songs from the original album, those tapes contained one previously unreleased track, “Don’t Die,” written by Richard Hell and Ivan Julian, and that track is included on this disc. It’s a seriously cool and strong song (another version of it had been released). The rest of the second disc is made up of demos and single versions, beginning with the single of “The Kid With The Replaceable Head,” in which Richard sings “They say he’s done” instead of “They say he’s dead.” This single was released in the late 1970s. The flip side, “I’m Your Man,” is also included here. This totally fun song was also included on Richard Hell’s 1984 compilation, R.I.P., as well as the 2002 compilation Time. That’s followed by demos of “Crack Of Dawn” and Bob Dylan’s “Going Going Gone.” I particularly like the demo of “Going Going Gone,” because of Richard Hell’s vocals. Oddly, this might be my favorite version contained in this two-disc set. The demos of “Funhunt” and “Smitten” were previously included as bonus tracks on Destiny Street Repaired.

Another highlight of this disc is the demo of “I Lived My Life,” the Fats Domino song. It has that familiar Fats Domino groove, and so has quite a different feel from the rest of the tracks in this two-disc set. This song was previously included on Richard Hell’s R.I.P. album. That’s followed by the demo of “Ignore That Door,” which features some really good work on guitar. Also included is the single version of “Time.” Hey, I’ll take as many versions of this song as I can get. That’s followed by the single version of “Don’t Die.” As much as I like the other version of “Don’t Die” included on this disc, this version is even better. I love those backing vocals by Kitty Summerall, as well as that guitar work. There is something seriously delicious about this track. This disc contains two more previously unreleased tracks – the demo of “Staring In Her Eyes” and a live version of “Time” recorded in 2004 at the memorial for guitarist Robert Quine.

Destiny Street Complete is scheduled to be released on January 22, 2021 through Omnivore Recordings.

Posted by Michael Doherty at 12:21 PM