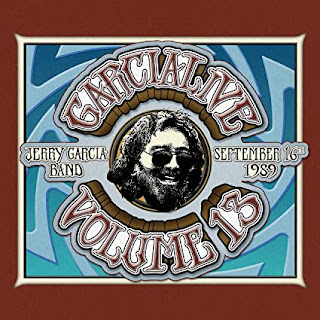 I saw my first Jerry Garcia Band shows in September of 1989 – in Hartford, Connecticut and Mansfield, Massachusetts. Clarence Clemons joined the band on saxophone at the Great Woods shows, and that ended up being the only time I saw him play. There weren’t taper sections set up at those shows, so the quality of the audience tapes wasn’t as good as it could have been. That’s one reason why it’s fantastic to get another official release from that tour. Garcia Live Volume 13 contains the complete show the Jerry Garcia Band played at Poplar Creek Music Theatre in Illinois on September 16, 1989, the final show of that tour. And, yes, Clarence Clemons sat in at this show too.

The first disc contains the complete first set, which opens with “Cats Under The Stars,” the title track to Jerry Garcia’s 1978 LP. And it’s a great start to the show, with its delicious groove to get the crowd dancing. And Clarence Clemons makes his presence felt pretty quickly, adding some nice touches early on. “Anyone who sweats like that must be all right.” Yeah, things are moving and pumping, and Jerry sounds elated, and they keep that groove going. That’s followed by “They Love Each Other,” and that combination of saxophone and organ at the beginning is so damn good that I can’t believe it wasn’t there for every other version of this song Jerry had played. And while the Grateful Dead turned in some excellent renditions of this song over the years, it seems custom-made for the vocal work of Jacklyn LaBranch and Gloria Jones, who add so much power to this love song. And here Clarence delivers a wonderful lead. This is a tremendous and joyous rendition, one of the best I’ve heard. The band then turns to a Chuck Berry number, “Let It Rock,” kind of easing into it. But as soon as Clarence digs in, things are moving forward, and his presence makes this rendition something special. I mean, hey, what is a classic rock and roll song without a saxophone? And his lead here has a deliciously classic vibe. Jerry’s guitar adopts that great Chuck Berry sound, and everyone is in the spirit of the thing.

Jerry then leads the band into a soulful, passionate rendition of “I Shall Be Released,” the first of three Bob Dylan songs played that night. Clarence Clemons’ sax soars in all the right places, and Melvin Seals contributes some really nice work on keys. And every note on Jerry’s guitar seems meaningful. That’s followed by “Someday Baby,” which establishes a cool groove straight away, a place for everyone to play. I particularly like what Clarence Clemons does with it. Then we get a glorious version of “Dear Prudence.” I love Gloria and Jacklyn’s backing vocals on this song, the power they have is exhilarating and intoxicating and uplifting. You get the sense their voices could shift entire continents and wake the distant gods. This rendition really takes off toward the end, that jam taking on an exciting energy. They then wrap up the first set with “Let’s Spend The Night Together,” featuring more wonderful work from the backing vocalists. The song develops into a splendid jam, and Jerry sounds so good. Ah, I miss spending nights seeing him perform.

The band opens the second set with “How Sweet It Is (To Be Loved By You),” Clarence’s sax blowing right from the start, and Jerry’s vocal performance having the power to match it, making this a rousing rendition, one to get you smiling and ready to declare you eternal love for whoever might be dancing with you. That’s followed by the second Dylan song of the night, “Knockin’ On Heaven’s Door.” I think whenever I saw the Dead play this one, it was as an encore. It’s interesting to hear this one so early in a set, but it’s a good rendition. Jerry Garcia Band approached this one differently than the Dead did, giving the song a reggae feel during the chorus, which gave it a lighter vibe. There is some beautiful work on guitar on the slower sections, and Clarence Clemons just takes over at a certain point, delivering some fantastic, passionate work. “Think” has a groove you just need to sway to, and this version features excellent backing vocals. And I love that lead on organ. That’s followed by a nice rendition of Bruce Cockburn’s “Waiting For A Miracle.”

In the summer of 1989, just a couple of months before this show, I saw Los Lobos open for the Grateful Dead, and they were wonderful. At this show, Jerry Garcia Band covers their “Evangeline,” a fun rock and roll tune from Los Lobos’ 1984 LP How Will The Wolf Survive? Los Lobos includes saxophone, something usually missing from the Jerry Garcia Band’s performances of this song. So the presence of Clarence Clemons pumps more energy into it. That’s followed by “The Night They Drove Old Dixie Down.” I know that recently the word “Dixie” has come under fire, and I’ve even heard musicians question the future of covering this particular song, which is several shades of insane. It’s a good song, and this is a gorgeous version, featuring an excellent, heartfelt vocal performance from Jerry. And Melvin Seals’ work helps make this one of the concert’s highlights. They then wrap up the show with Dylan’s “Tangled Up In Blue.” I love the way Jerry Garcia Band handles this one, with that added backing vocal part, repeating “Tangled up in blue.” There is an undeniable energy and joy to the group’s approach, making it a good choice for a second set closer.

Posted by Michael Doherty at 8:33 PM