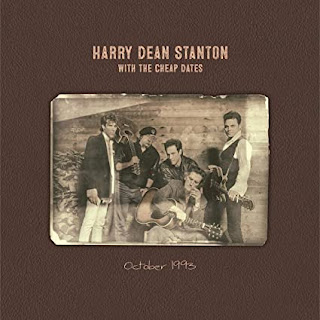 I am a big fan of Harry Dean Stanton’s acting work (especially in films like Paris, Texas and Alien and even Pretty In Pink), but I didn’t really become familiar with his music until several years ago when Partly Fiction was released, a soundtrack I love. The world lost Harry Dean Stanton in 2017, but now, thanks to Jamie James and Omnivore Recordings, we are getting a new CD release of his music. October 1993 contains two different sections, the first being studio recordings and the second being some live recordings from a gig at the Troubadour in West Hollywood. Harry Dean Stanton provides lead vocals, and plays acoustic guitar and harmonica on these tracks. The Cheap Dates include Jamie James on guitar and backing vocals, Slim Jim Phantom (from the Stray Cats) on drums, Jeff “Skunk” Baxter (from The Doobie Brothers) on pedal steel, and Tony Sales (from Chequered Past and Tin Machine) on bass and backing vocals.

The album begins with four studio tracks, the first being a cover of Bob Dylan’s “I’ll Be Your Baby Tonight.” The first version I remember hearing was that by Rita Coolidge, which I still love. This version by Harry Dean Stanton With The Cheap Dates is more of a rocking country number. Harry Dean’s voice sounds so smooth, so good. I love the way these guys approach this song, particularly vocally. There are some interesting little surprises with the way they handle certain sections, especially on the lines “You won’t regret it/Take your shoes off, do not fear.” As on Dylan’s original recording, there is some nice work on pedal steel, which is prominent throughout the track. They follow that with a really good cover of Chuck Berry’s “Promised Land,” a song that was also included on Partly Fiction. This version is different from the one on that album, this one being a full band country rock version. There is a whole lot of energy here. When they deliver the song’s final lines, and they do so with great gusto, the track is only a little more than halfway through. After that, the band jams and Harry Dean delivers some strong work on harmonica. Then they return to the last couple of stanzas to wrap it up.

This disc also features a wonderful rendition of William Bell’s “You Don’t Miss Your Water.” Unlike Bell’s original recording, Harry Dean Stanton begins his version with the song’s title line, featuring some nice harmonizing. The acoustic guitar is more prominent on this one, and there is some beautiful work on harmonica. The final studio track is a cover of “Across The Borderline,” a song written by Ry Cooder, Jim Dickinson and John Hiatt. Harry Dean Stanton and The Cheap Dates deliver a pretty and moving rendition. “‘Cause when you reach that broken promise land/Every dream slips through your hand/And you know it’s too late to change your mind/‘Cause you paid the price to come so far/Just to wind up where you are.” Those lyrics still pack a punch, don’t they? They could have been written in the last four years. By the way, in 1993 Willie Nelson also covered this song, using it as the title track to an LP.

Live At The Troubadour

The live tracks begin with another Chuck Berry song, “You Never Can Tell,” sometimes referred to as “C’est La Vie” and here shorted to “Never Can Tell.” Harry Dean Stanton asks the crowd how they’re doing, then launches into the song, providing some great work on harmonica before getting into the lyrics. They have fun with this one, growing softer for a moment for the line “But when the sun went down, the rapid tempo of the music fell.” There are some other playful touches. That’s followed by “Spanish Harlem,” written by Phil Spector and Jerry Leiber, and originally recorded by Ben E. King. This version has a sweet, romantic vibe, and features some truly wonderful vocal work. The track ends with a little banter about the band’s name.

Jamie James takes over on lead vocals for Warren Smith’s “Miss Froggie,” a fun rock and roll song. This track boasts some great stuff on harmonica and of course some cool work on guitar. Jamie James cuts loose vocally too. By the way, you might know him from his work with The Kingbees, and Harry Dean Stanton mentions that at the end of the track. The group then gets into the blues with a cover of Jimmy Reed’s “Bright Lights, Big City,” this version mixing blues and country elements. This song has of course been covered by country artists, most notably Sonny James. The album concludes with “Canción Mixteca,” and at the beginning of the track Harry Dean Stanton mentions that it was featured in Paris, Texas. By the way, if you are not familiar with that movie, you really should make an effort to see it. Harry Dean Stanton also sings this song on Partly Fiction. The version here is excellent, and rather beautiful.

October 1993 is scheduled to be released on February 12, 2021 through Omnivore Recordings.

Posted by Michael Doherty at 7:18 AM